Contested Urbanism: Reclaiming the Right to the City in Dharavi

After reading with interest Katia’s and George’s recent posts on Dharavi, I thought I'd share some reflections on contested urbanism and the right to the city in Dharavi from various papers I have been collaborating on with Dr. Camillo Boano, Lecturer and Director of the MSc Buidling and Urban Design in Development at University College London and fellow former student William Hunter, based on research we were part of in May 2009 on the intersection between space, policy and livelihoods in community-driven slum rehabilitation projects in Dharavi. 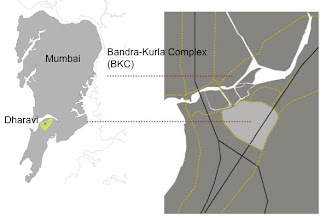 Popularly known as Asia’s largest slum, covering almost 239 hectares and with an estimated population somewhere between 700,000 and one million people, Dharavi is strategically located in the centre of Mumbai, an area once a marginal swamp that has been infilled over generations as squatter settlements have been pushed northwards by urban development processes. As present Dharavi is also at the centre of a highly controversial debate over the present and future of Mumbai: through the Dharavi Redevelopment Project (DRP) international developers, bureaucrats, state agencies, civil society and social movements are engaged in multiple confrontations over land, density, typology and the right to a decent life, while futuristic Dubai or Shanghai-style landscapes are imagined for development over what is now prime real estate. 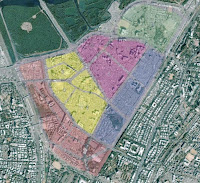 This state facilitated public-private partnership is in essence a tabula-rasa mega-project redevelopment strategy for the entire territory of Dharavi, including an artificial and instrumental division of the area into five sectors to be allocated to five private developers; a maximum increase of Floor Space Index which contributes to higher urban densities and the adoption of a spatial transformation from horizontal, low-rise ‘slums’ to a high-rise podium style typology (G+12 and higher). Informal settlements are thus envisaged to be replaced with high-rise developments irrespective of the existing vibrant economy and the diverse needs within, informal and complex, that have evolved through stratifications, adaptations and historical modifications.

For over half a century, Dharavi’s residents have in essence claimed their right to the city in these 239 hectares of urban space, where generations of slum dwellers in what are now 85 nagars (neighborhoods) have organised themselves in a complex labyrinthic physical layout built around work-live dwelling forms. The BBC in 2006 estimated that its thriving informal economy generates an annual turnover of business to be more than £350 million (over $541m). As Echanove and Srivastava published in their article in the New York Times in July 2009, no master plan, urban design, zoning ordinance or construction law can claim any stake in Dharavi’s prosperity as it was built over many decades entirely by successive waves of immigrants fleeing rural poverty, political oppression and natural disasters.

Since the early 1990s the Alliance – a partnership of the NGO SPARC, its non-profit developer wing NIRMAN and two grassroots organisations named Mahila Milan and the National Slum Dwellers Federation – has sought to enable a bottom-up process by directly engaging Dharavi’s poor in the production of space in Dharavi, claiming their right to housing in the city. These activities demonstrate, through previously unrealised solutions in spaces they control, the urban poor’s potential to challenge and change formalised rules and regulations that tend to function in the interests of dominant powers. By producing housing, the Alliance sets a precedent as an NGO developer undertaking this work as Lefebvrian production of space concepts manifest in concrete examples of bottom-up, community-driven urban development processes. 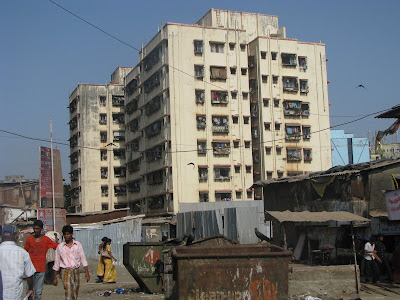 In recent years however, facing ‘Dubaification’ in the top-down, technocratic DRP process, Dharavi’s designation as a special planning area in 2004 – a status that enables secretive modification of development regulations – has thrust the reigns of development completely into the hands of the government and private sector. After subsequent years of bottom-up pressure tactics and struggles, including open letters to the government and media and peaceful protests from residents of Dharavi, leaders of prominent grassroots groups and NGOs and the Concerned Citizens of Dharavi (CCD), a space was made for institutional participation when the CCD was sanctioned as an Committee of Experts (CoE) in 2008. This eleven-member Panel of activists, professionals, academics and retired civil servants, including members of the Alliance, chaired by the retired Chief Secretary of Maharashtra continues its pressure for the urban poor’s representation and meaningful engagement within the DRP.

Alongside deeply conflicting visions between actors and questioning of true rights to the city for Dharavi’s residents and how claims to this demand are effectively represented, the top-down government vision is clearly and profoundly embedded in a neoliberal trickle-down approach. And while the bottom-up vision – as manifested by members of the Alliance and the CoE – is critical of the DRP, these actors maintain a close and highly strategic relationship with government bodies in order to function as facilitators between different institutional levels. While the CoE has successfully lobbied for the adoption of urban design guidelines in the DRP and a socio-economic baseline survey to be conducted in Dharavi, their vision and desire for an inclusive development process has been relegated to making the DRP more ‘humane’ and guiding developers towards a more sensitive development. Hence, the five-sector, five-developer DRP concept continues, with the CoE merely tweaking the edges, appearing as a body legitimising a ‘gentler’ neoliberal approach to Dharavi’s development rather than actively pursuing a radical Lefebvrian right to the city.

The CoE has not challenged the state’s power but rather aligned with the way the right to the city is manifested in practice by grassroots groups across the world, in essence modifying the political content and meaning of the contested term. In this light the CoE is offering, as Colin McFarlane notes, a development alternative rather than a form of alternative development, where the former provides strategies that seek to change and refine development positions while offering different perspectives within the DRP framework, and the latter seeks to redefine development altogether.

What strategies then, in this complex and highly contested case of urbanism, are most effective to claim bottom-up rights to the city? As Ananya Roy posits, will demanding rights through ‘rebellious citizenship’ ensure the right to the production of space for the urban poor, or will it leave them without access to the infrastructure of populist mediation and its regulated entitlements? It is clear that appropriate tactics are needed to begin resolving the spatial tensions between top-down urban strategies and bottom-up tactics of spatial adaptation and urban activism. One clear element that is fundamental in the move towards greater equity and justice for the urban poor in Dharavi is that of continuous struggle.

Credits: Map of Mumbai situating Dharavi from BUDD DPU report. Map of 5 sector division of Dharavi from Schwind, L. and Kärcher, J., 2008. Realising Dharavi architectural thesis. Image of spatial transformation imagined for Dharavi as published in the Mumbai Mirror, May 2009. Photo of Bharat Janata Housing Cooperative in Dharavi (a SPARC-NIRMAN project) from BUDD DPU report. Photo of Dharavi from the roof of Rajiv Indira Housing Cooperative by Melissa García Lamarca.