Community-Driven Visions of Modernity in Mumbai

Residents of Bhendi Bazaar (above) in Mumbai are planning to replace their neighborhood with mixed-use towers.

The largest cluster redevelopment project in Mumbai is about to begin – a precedent-setting "upliftment" of 16.5 acres in the heart of the city's southern tip, to be completed in 2017. Southern Mumbai is dense and vibrant, defined by decaying, charming colonial architecture. But it is an area that continues to challenge planners interested in transforming Mumbai into a "world-class city." On the surface, the Bhendi Bazaar redevelopment may seem to be another example of top-down planning run amok, insensitive to local context and transplanting a vision of modernity. In fact, it is the fruit of a participatory, community-driven project to reshape the neighborhood.

Bhendi Bazaar is home to the Dawoodi Bohras, a tight-knit community of Ismaili Muslims led by the 52nd Dai His Holiness Syedna Mohammed Burhanuddin, who auspiciously just celebrated his 100th birthday. The Bohras have lived in Bhendi Bazaar for around a century and own most buildings in the area, many of which are overcrowded chawls without modern conveniences. While these buildings have charm and character for visitors, it seems that for inhabitants the charm has worn off.

Residents plan to build mixed-use towers, with large public spaces and parking lots for cars. Overseen by the Saifee Burhani Upliftment Trust, the plan will re-house 25,000 people and 1,200 commercial establishments at no cost to the current inhabitants, giving each household full ownership of a 350 square-foot flat. It is a "no profit, no loss" project, as construction costs will be offset by profits from the construction of four towers — with parking, a mall and market-sale apartments — on 20 percent of the plot. Not only will this development be the first of its kind in Mumbai, but it will also change the face of the main city, as the area borders a main highway in southern Mumbai. 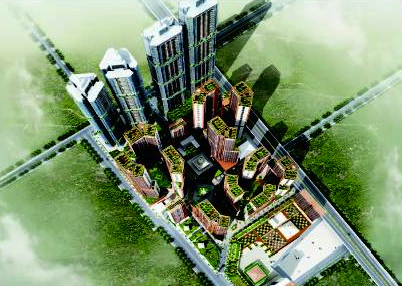 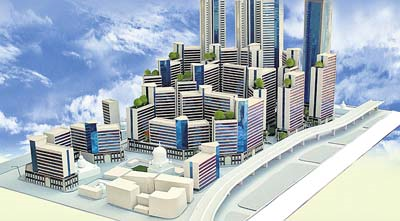 Renderings of the proposed "upliftment" of Bhendi Bazaar.

The Dawoodi Bohras can undertake such a project because they are an unusually homogeneous, tight-knit, spatially concentrated, affluent and politically organized community, and they have thrown their considerable weight behind the redevelopment.

While the project lays out a starkly modern vision, it also relates to the context and needs of Bhendi Bazaar. It keeps intact existing religious structures and expands public spaces around them to allow more people to gather during holidays. Mutton Street, the home of Chor Bazaar — an old antiques market frequented by locals and tourists — will be kept intact; the businessmen there realize that the old architecture and character of the street directly supports their business of selling antiques.

Certainly, there is recognition in the neighborhood that the feel of the place will change radically. In my conversations with locals, I sensed some apprehension about what the new neighborhood will be like. However, the project has the consent of more than 70 percent of the residential and commercial population and is the subject of outright enthusiasm by many.

A view of the roofs around Bhendi Bazaar, interspersed with previous attempts at redevelopment.

In Western cities, we are often nostalgic for old architecture — a hallmark of gentrification is the reclaiming of old warehouses and factories as housing. But this is a product of our own urbanizing trajectory. In Bhendi Bazaar, residents see old buildings as decaying, dirty antiquities. There is a history of violence in the neighborhood, once a stronghold of gangsters like Dawood Ibrahim. Violence is still present today, and confusing, narrow passages around buildings aid quick getaways. The community's term for the project, "upliftment," says it all. We may call this a borrowed vision of modernity, but it is their vision – modernity with Bohra characteristics — which blurs the line between cultural conceptions of what is "ours" and "theirs."

When assessing development, it can be easy to assume that, in cities of the South, skyscrapers are the product of a top-down, government-driven development — an imposition of Western ideals without sufficient contextualization. But skyscrapers, cars and grand plazas are sometimes chosen by communities themselves, according to their needs and preferences. This isn’t to say that one vision of development is better or worse. Rather, visions of development will vary from place to place, and local inhabitants know best what they need.

A video about the project, which includes an interview with the architect, can be found here.