Occupy: The Sky’s the Limit

In the United States, the mainstream media seeks to place protest out of sight and out of mind, often reducing serious social movements to nothing more than tentative uprisings. But now, more than 1500 cities and towns worldwide have been "occupied" by a revolutionary urban movement of young people, an “army of love” that cannot be ignored.

They protest financial inequality and corruption in a steady stream of social media communications and public demonstrations. It is an educated movement of many students and workers, held together by the Internet and “tent city” occupations in urban city centers. It is already making its own world through iPhones, iPads and independent media. 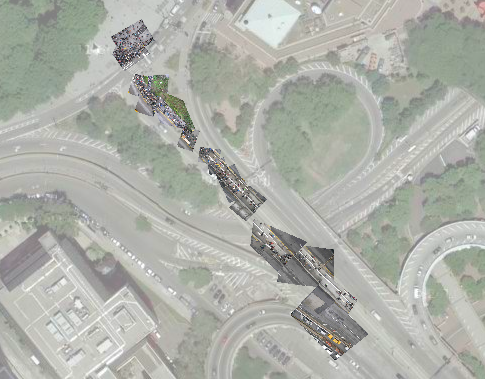 Aerial map of Occupy Wall Street (from the interactive map on MapKnitter).

As in the notorious encampment in Tompkins Square, the park in Manhattan's Lower East Side, activists, homeless citizens, residents and city officials will be seen clashing over greivances in the numerous videos recording the events for years to come. Like Tompkins Square, the Occupy movement, touches upon the most sensitive issues of today’s urban space and has its own media. But a historic difference between these two struggles is the presence today of numerous kinds of networked portable devices, from the cell phone to the laptop, most enabled with GPS and HD video. 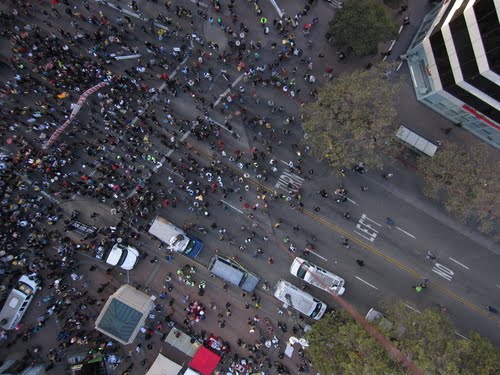 What’s spatial about the movement is very clear. Across the world, the Internet, GPS, mobile telephones, Facebook, Twitter, Wordpress and more are holding it together as a “network.” Not only do they form the foundations of its interconnected global electronic space, but also the day-to-day communications of its local activities. The movement is mapped as an “occupation” of public squares, commons, plazas and parks across cities. Despite laws and media created against the interests of the public, pervasive handheld media tools and networks give us the capability to document, map and track our “occupations” and cities — making them our own.

Molly Hakwitz is an artist, designer, writer and editor with a Ph.D. in Media Studies. She writes on mobile cultures and pervasive networks. She is editor at Other Cinema’s Otherzine and a contributing editor at New Media Fix, a global net artist blog.