Phasing Out Cars in Cities 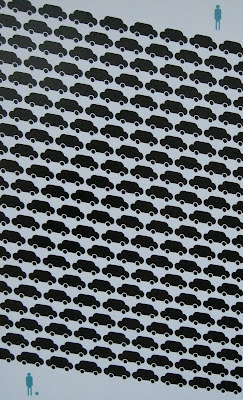 I tend to see cars as inevitable, but when it comes to cities my thoughts have changed. Here are a few reasons why.

Drivers have to deal with accidents, traffic jams, parking (time-consuming searches, dents, remembering to move from one side of the street to the other on certain days), emissions, breakdowns, maintenance, gas, tickets, road rage, de-icing, insurance, and limited options for multitasking in transit.

Those who aren't driving are even more vulnerable to accidents and emissions, and have to deal with noise (horns, alarms, engines), space-consuming parking lots, spray from puddles, streets lined with bulky metal oil-leaking structures, and the difficulty of moving through cities where these structures dominate.

Cars detract from public health and public space. I understand their value in suburbs and rural areas, but in dense urban settings the private benefits don't outweigh the public costs. Thus we stand to gain by reducing the dominance of cars in cities. In "Questioning the Car" on Urban Omnibus, Mark Gorton of OpenPlans shares practical ideas for making this happen.

Eventually there could be all kinds of efficient systems for transporting people into, out of and throughout urban areas. We could pay for this in part by charging for the use of cars, while simultaneously reducing the need for them. The space that opens up could be used for housing, employment and recreation.

Some form of large-scale private transport will probably always be necessary in cities. But if we can find ways of making cars less problematic and pervasive, urban living will be much better for it.