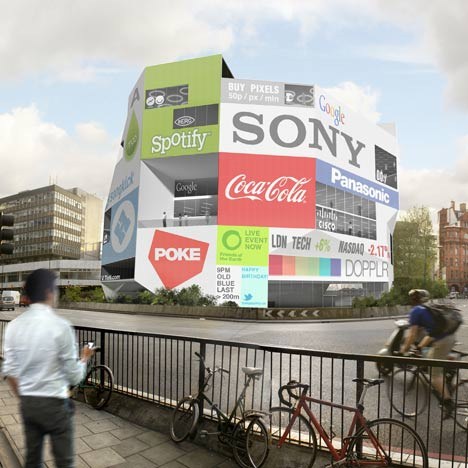 Proposed design for an office block in "Silicon Roundabout" in East London, where policymakers hope to create a technology hub.

Can you engineer an innovative neighborhood? London officials are banking on it. Last November, Prime Minister David Cameron announced plans to turn East London into “Tech City,” a global technology hub to rival Silicon Valley. The designated area stretches from (not-so-catchy) “Silicon Roundabout” near Old Street, across trendy Shoreditch, to the Olympic Park that will host the 2012 Games.

The plan was debated last month at “Liquid City,” an evening salon in the heart of Tech City. Fittingly seated under a carpet of lightbulbs, a panel – including Tech City CEO Eric Van der Kleij – and (mostly young) audience discussed how to create an environment that yields bright ideas. 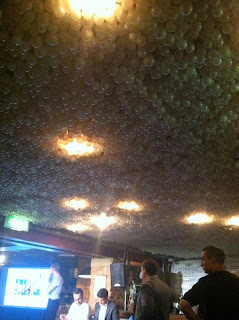 In the late 1970s, California’s Santa Clara Valley favored collisions between creative people, allowing ideas to build on each other, explained Jack Roberts of Future Human, which organized the event. Buoyed by ideological spillover from Bay Area counterculture movements, this meant an ideal climate for innovation.

These are the happy accidents that Tech City hopes to spur, according to Van der Kleij. Building on a spurt of start-ups and neighborhood vibrancy, the government hopes to attract high-tech businesses and drive investment through tax credits, networking opportunities and marketing. It boasts that Google, Facebook and Cisco have promised to move in, and 15 high-tech companies have grown to 300 in three years.

The Liquid City discussion, and public discourse on Tech City generally, have glossed over two related topics: migration and gentrification. People – as contributors and beneficiaries – are missing in the innovation equation.

The Tech City plan privileges capital and corporations over people as engines of innovation. While trying to attract companies and pounds to East London, the U.K. government is shooting itself in the foot by restricting visas for skilled professionals. In a recent lecture in London, Oxford professor and former World Bank vice president Ian Goldin argued that migration has always been key to innovation, engendering dynamism and creativity. Migrants produced half of startups and investment in Silicon Valley, he said.

Van der Kleij said he was pushing a visa for entrepreneurs who secure £50,000 in investment, but these are unlikely to retain the skilled, creative people needed for innovative collisions to occur.

The discussion also takes for granted that the government’s job is to promote gentrification. Three government bodies – UK Trade & Investment, the Mayor of London and the Hackney Council – are behind Tech City, which actively capitalizes on neighborhood vibrancy to create a “world-class business environment.” The Hackney Council, a local government body, is reduced to “a key stakeholder in the delivery of the Tech City initiative” that is to “assist the companies which make up the digital economy access support they need for growth, by maintaining the conditions for Tech City to thrive.”

A salon participant from a local media company, among the organic start-ups lauded by Tech City boosters, asked what would happen to his business once the project drove up property rates. “If you can’t pay the rent you will be displaced,” responded panelist Andrew Carter of the Centre for Cities. “It’s what happens.”

The government is not asked to do much justification for a project that will price out the residents and companies that made the area attractive, or for privileging capital investment and large corporations over affordable housing and local employment. The assumption is that economic growth will be good for everyone in the end, but gentrification rarely works that way.

One salon participant suggested that Tech City invest in local libraries to incubate innovation while bolstering an ailing public resource. Van der Kleij promised to bring the suggestion to official ears. This was the inkling of a conversation needed to ensure that the government bears its responsibility to balance benefits to business with benefits to people.