The Town of Jesus, Bedouins and American Explorers 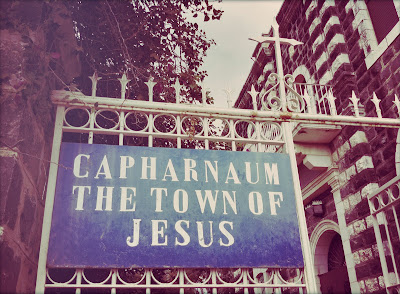 Visiting Capernaum was a surprise. Not knowing what to expect from the dot on the map, we found ourselves at a site where Jesus strolled more than two thousand years ago. Today — during a birthday observed by many — I am reminded of the ancient town I visited last April on the northwestern shore of the Sea of Galilee in Israel. Passing the ruins of such ancient houses, churches, synagogues, squares and streets made an impression. 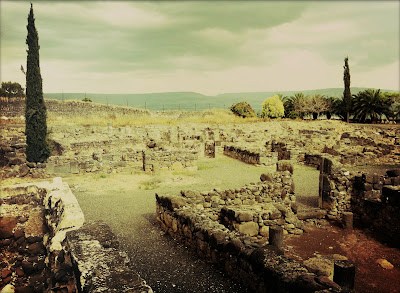 The day was hot, and when we read a sign that said, "No shorts, please," we almost considered passing it by. Capernaum is not only an excavated site for tourists to wander around but also home to a Franciscan monastery and Greek Orthodox church. But we chose to obey the demand – sometimes one just has to put on pants.

Capernaum was Jesus’ second home and, during the period of his life, a garrison town, administrative center and customs station on the major road between Damascus in Syria, southern Israel and beyond. According to the New Testament, Jesus chose his disciples Peter, Andrew, and Matthew from Capernaum and performed many of his miracles here. 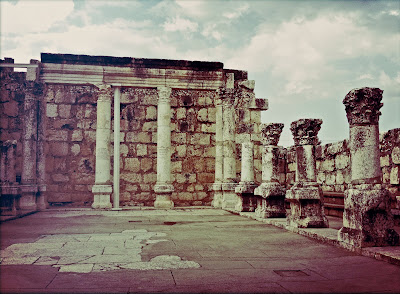 The town of Capernaum first came into existence in the second century B.C. It remained a large and prominent city, holding some 1,500 residents for more than nine centuries. In 1838, an American explorer discovered its ruins, and British, Italian and German archaeologists and pilgrims soon followed. The newcomers acquired a large area from the Bedouins and fenced off the site where they had found remnants of churches and a synagogue (above). 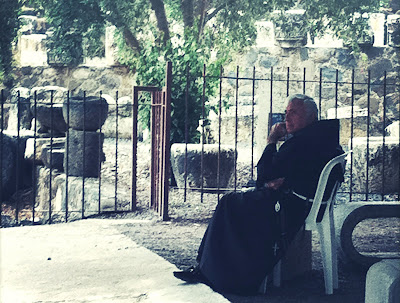 The layout of the town appears to be quite regular for its time. On both sides of an ample north-south main street arose small districts bordered by small cross-sectional streets and no-exit side streets. The most extensive part of the typical house was the courtyard, where there was a circular furnace made of refractory earth, as well as grain mills and a set of stone stairs that led to the roof. Seems like a likable city to me.