Are Architects the Last People Needed for Reconstruction?

Stimulated by the article published in the UK newspaper The Guardian titled 'Architects are often the last people needed in disaster reconstruction' by David Sanderson, several alumni and myself, pulled together by our former MSc Course Director, crafted a collective reflection on the issues raised therein. We want to share this on Polis to hear your thoughts and insights on the role of architecture in post-disaster reconstruction. 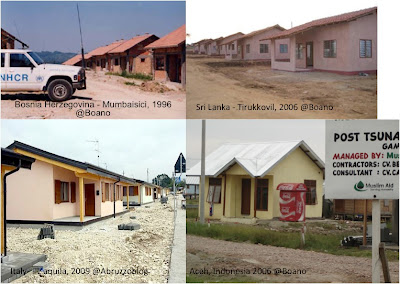 In an article titled ‘Architects are often the last people needed in disaster reconstruction’ (3 March 2010), David Sanderson recognises the need to “build back what can’t be seen as much as what can” in post-disaster recovery processes. Much of what he says is justified to some degree. Strangely enough, however, his claim does not acknowledge that the modus of practice in architecture in developing countries and especially in disaster situations has evolved on a similar path to that of humanitarian work. In fact, it seems that Sanderson does not recognise that architecture has significant power to reconstruct social networks, raise solidarity, empower communities and encourage partnerships. Moreover, as he deems architecture to be “marginal at best” in cases of relative certainty, the critical relationship between built environment, social networks and the ability for action in general is dismissed.

The literature on architecture, disasters and the role of participation in the building process is expansive. As with general humanitarian work, it has become widely accepted that turnkey projects are not the answer and that communities need to be enabled and empowered. Within the architecture process, engaging local people in the design and construction phases has become central to good practice, and rightfully so – the discourse that instigated this new mode of practice has evolved in parallel to broader dialogues regarding work in development. While it is true that many architects continue to work towards deliverables, the same can be said about humanitarian workers. The problem does not lie in architectural education alone but rather in the broader institutional structure that defines who gets development funding and who doesn’t. As accountability gets shifted towards funding agencies/agents instead of the community itself, humanitarian workers, whether an architect, social worker, or otherwise, often have to present the outcome of their work in a way which can be empirically calculated and qualified. Stating that architects are “taught to focus on the product (a building), whereas humanitarian practitioners major on the process (involving people)” not only oversimplifies the difference between branches of architecture and architectural education, but it also denies the fact that many NGOs and international agencies continue to work within a conventional top-down bureaucratic model.

Furthermore, the work of Architecture for Humanity for example – although often focussing on ‘one-off’ projects rather than large-scale disaster recovery processes – shows how research and development and in this case, profiled public relations, can play a role in promoting the livelihoods of disaster-striken communities while lowering their vulnerability in regards to environmental stresses. As Steve Rose ('Haiti and the demands for disaster-zone architecture', 14 February 2010) points out, the architect’s tool box can allow for the creation of buildings that make the best of difficult circumstances, where limited resources exist. Architects (and engineers) also have the expert knowledge to ensure that buildings stand and endure pressure from natural environmental elements. And as Rose points out, this can be achieved at a low-cost, especially when the professional services come free of charge as is the case with the surplus of architects within AFH’s Open Architecture Network. Bottom line is, in the case of a complex disaster, a built environment background is a necessity when 'engineering' and coordinating certain reconstruction projects. Indeed, alongside required levels of expertise lay a fundamental need for professionals who understand 'community' and have a priority in recognising 'people first'.

At a more general level, architects are producers and planners of space. Whether focusing on cities, villages, camps or other settlements, architects possess a strong understanding of how to structure the human habitat. Sanderson avoids the idea that space serves a fundamental importance as an envelope for all the 'processes' of which he speaks. The 'separate' strata of economic, cultural, political, social, and physical elements of the city are in fact integrated textures, and if architects are marginalised, then a resultant disconnect between the buildings and the wider functioning of the urban system is likely to occur. 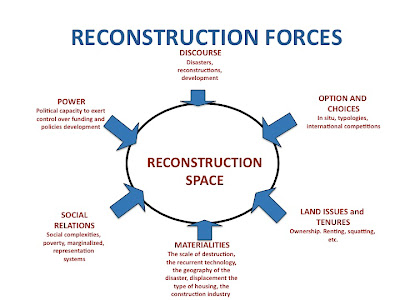 The intensity of a disaster and the limited window of opportunity that immediately follows it must be addressed from multiple angles concurrently to re-construct the livelihood and spatial networks of an affected area. Architects should understand the connections between the societal processes of living in a city and their spatial manifestations. Writing off the spatial element as something separate and unrelated severely limits the transformative potential of reconstruction and rehabilitation in the post-disaster context. 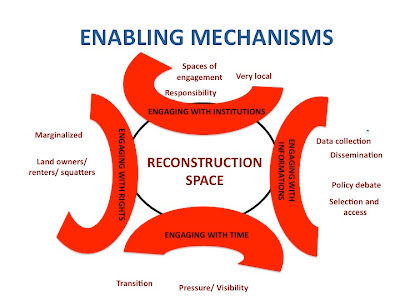 To expand the conscious goals of architecture, the practitioner must also challenge the rationality designed to realise this end. Thus, the creation of humanitarian and activist architecture is not simply a matter of offering services to new clients, but one of shifting conceptual and policy focus in response to the structural evolution of contemporary society, thus calling for a broader definition of architectural limits and non-conventional domains of action. Such activities can lead us towards a renewed sense of critical anthropocentric post-disaster practice. If we have lost this passion in architectural thought and protocol, then shame on us.