Urban Reuse with a Post-Colonial Touch 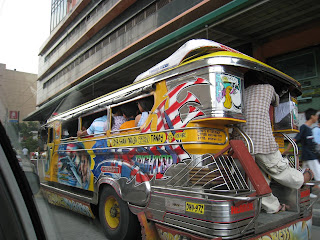 A jeepney in Manila 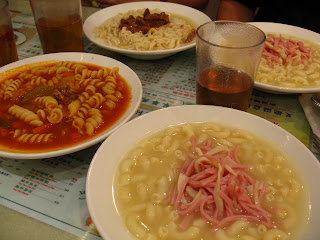 The spread at a Hong Kong cha chaan teng

These two photos share an unlikely bond: They are ubiquitous cultural symbols in the cities from which they hail. These cultural symbols are born from post-colonial reuse, given a fresh lease of life with a heavy dash of localization and a good dose of local entrepreneurial flair.

The jeepney, omnipresent on Manila's roads, were converted from surplus U.S. military jeeps used in World War II into local share taxis. Painted in eye-catching, resplendent colors with themes ranging from religious images to graffiti art, jeepneys stand out even in bumper-to-bumper chaos.

The cha chaan teng or 1960s-style Hong Kong coffee shop diner, on the other hand, serves an eclectic menu which features Hong Kong-style Western cuisine. As the local lore goes, local Hong Kong diners created their own interpretation of Western food, as it was too expensive Western restaurant cuisine was not affordable for many local Hong Kongers during British colonial rule.

Today, the jeepney is regarded as a symbol of Filipino culture, while a small movement spawned in Hong Kong's Legislative Council in 2006 to propose the inclusion of the cha chaan teng as a UNESCO Intangible Cultural Heritage of Humanity. The jeepney and cha chaan teng are reflections of each society's complex post-war or post-colonial relations, depoliticized, perhaps, in these instances by the calculus of opportunity and entrepreneurship. Their popularity suggests one possible approach for incentivizing urban reuse of physical and intellectual property: identify a need, localize, and commercialize. Conversely, there are urban reuse projects such as New York's High Line, conceived not as a commercial enterprise, but as a means to create a public good.


The NYC High Line from two seconds away on Vimeo.

Credits: Images from the author. Video from Vimeo.