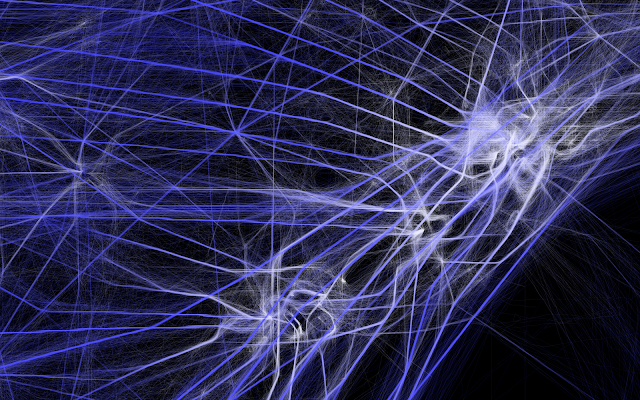 In an increasingly networked world, access to information is easier than ever.  A major drawback to this increased transmission of knowledge is that it can seem a bit overwhelming to both individuals and organisations.  While maps have often been a primary source of geographic and spatial knowledge of the urban environment, they have several pitfalls.

One is that their claim to objectivity can and should be called into question.  Often dominant forms of State power are reinforced by mapping what is desired to be seen rather than what exists in reality.  Informal settlements of an enormous scale are sometimes omitted entirely from authority maps to dodge the acknowledgement of, and responsibility for, the massive housing shortages of megacities that have yet to be addressed by the State or the Market.

Another pitfall is the status of maps as an end product, rather than the notion of mapping as a process of inquiry.  While an objective set of visual information is absolutely essential in understanding the spatiality of the urban environment, it still represents a point of view and offers no explanations as to how the space was formed, nor does it suggest possible means of intervention.

In turning the information overload of the 21st century from a source of stress into an opportunity to build upon existing resources in a coherent way, mapping as a process plays a critical role.  In fact, this method of enquiry extends back centuries, to speculation on the antipodes of Europe and the implications of their existence.  More recently, architects, graphic designers, and artists have used mapping to explore shifting perceptions, and to distill the mass of available information down to potent and strategically configured data that is both visually stunning and revelatory.  In an era when the visual media reigns supreme, this could be a vital method of communicating novel concepts in the urban landscape.

Densely packed written analyses of urban governance, housing policy, and land use in cities is crucial to understanding urban conditions.  Urban design and architectural drawings are also crucial to comprehending proposed interventions in the cityscape.  What if mapping, in its articulate hybridisation of policies, data, and visual intervention, eased this continuous transition?

Hand an established map to a new author, throw in more information and an analytical mind, and the results can be astounding. The work and ideas of Joost Grootens in the Netherlands are gaining increasing recognition, and his new book Atlas of the Conflict promises to reorganise existing knowledge to create new connections and interpretations.

Latin American architects Supersudaca, through their simple rotation of the standard two-dimensional world map, effectively redirect emphasis and attention to cities of the Global South. 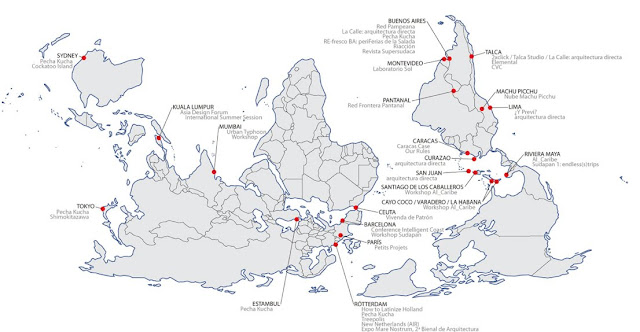 'Supersudaca: Around the World 2001 − 2008' showing the projects of architecture and urbanism thinktank Supersudaca

In addition, David Garcia Studio is transforming the way we digest information by mapping topographies and data through the new Manual of Architectural Possibilities. 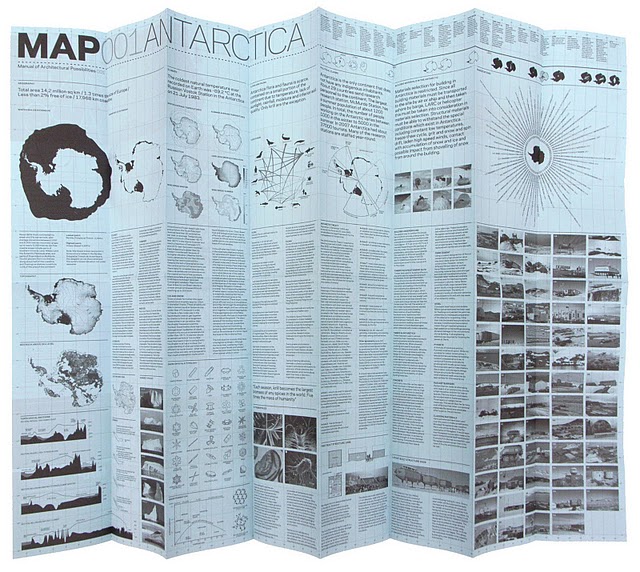 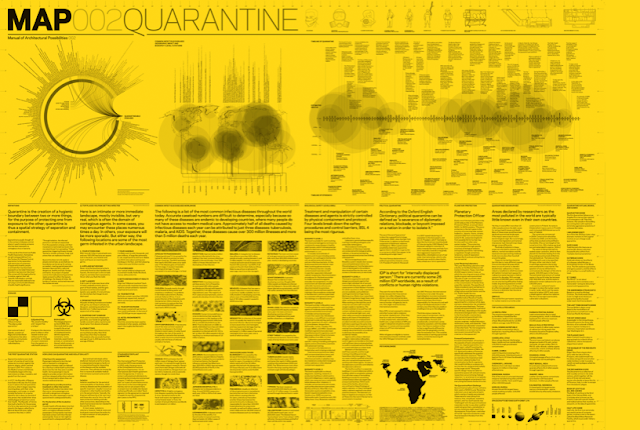 Part of Issues 1 and 2 of MAP (Manual of Architectural Possibilities) - It is described as "a guide to potential actions in the built environment, a folded encyclopedia of the possible, a topography of ideas, or a poster on the wall"

Thought pieces such as investigative mapping decode, translate and prioritise complex sets of information into spatial resolutions.  The resultant designed spaces, with their strong conceptual narratives developed through mapping, can process the complexity of the urban realm and reach their true transformative potential.  A recent opinion piece in the New York Times speculated, "Dreams are also an attempt to search for associations between seemingly unrelated experiences".  I would argue that mapping and dreaming may have more in common than previously thought.

Credits: Map of flight patterns from Aaron Koblin.  Map of locations of architectural projects from Supersudaca.  Images of  the Manual of Architectural Possibilities from their blog.