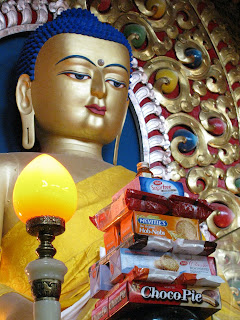 I'm reading The Jew in the Lotus, which chronicles the first formal dialogues between the Dalai Lama and a delegation representing the Jewish faith in 1990. Over the course of the exchange, the historic parallels between Jews and Tibetans as subjects of persecution and religious exiles became a subject of discussion.

An Orthodox Jewish member of the delegation was intrigued by the idea that Tibetans felt that the monastaries they had established in India and Nepal over 50 years of exile were replacing the ones they had lost. She wanted to know whether Buddhists had a concept of holy space, like Jerusalem for the Jews.

Karma Gelek, Secretary of Cultural and Religious Affairs of the Tibetan government in exile, put it like this:


"Holy spaces are symbols rather than the essence. We don't believe in untransportable holy space."

The author attributes this view to Tibetan Buddhists' understanding of the ultimate impermanence of all phenomena. It also makes sense in light of other Buddhist concepts, especially emptiness: everything lacks an intrinsic existence or an innate essence, but rather exists only in dependence, including upon a consciousness perceiving it. We are the ones imputing sacredness to the buildings, objects, territories. 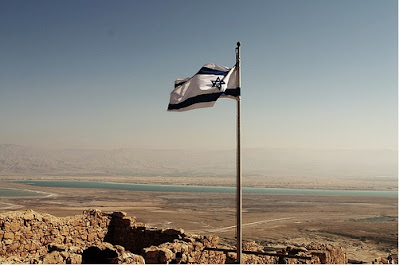 As with so many ideas, concepts of holy space have a very real effect. Observant Jews today evoke memories of exile and the idea of return to the Holy Land as a regular part of prayers. Zionism has often sung a secular tune, but is obviously the logical extension of the idea of a sanctified land. Of course, the problem is when conceptual clashes lead to violent clashes. It seems difficult to imagine how competing ideas ascribed to one space for so long can be reconciled: How can people even talk when they look at the same thing and see something completely different? At the same time, it's clear that concepts are not set in stone and can change radically. Like the buildings themselves, set in stone, they cannot but be changing every moment.

Credits: Photo of Buddha and temple in Dharamsala, India, by Katia Savchuk. Photo of Israeli flag over the Dead Sea by Adam Hyatt.