Cristina Mariano da Silva, 30 years old and 6 years squatting the building in Rio de Janeiro's city centre, arrived there in the following way. She used to live with her mother in the periphery of the city when she left home to live with her partner. They went to the city without any means to pay a rent where they got to live in a house "as a favour".

In a few months they had to leave the place. Cristina, then, was already pregnant with her first child. That's when they heard of what used to be the headquarters of today's extinct magazine "Manchete", a building that had been given to Banco do Brasil as a debt payment. "My husband knew someone who lived there", she said. When she arrived to the building there were no pigs, broken sewage, garbage or barrack huts. She got installed on the fourth floor of the six-storey building, built some walls for 10 Reais, put a door for 30, got an illegal power connection, was given a refrigerator for free, recovered a discarded cooker and a sofa from the street and bought a second-hand TV. 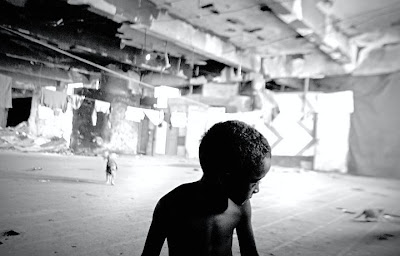 Today, there are some 100 families squatting the building, and getting a space to live there can cost 300 Reais. The main problem there is water, which can be fetched only from a broken tap on the ground floor, next to the pigs. The owner of the pigs promised to the rest of dwellers in vain that he would get rid of them soon.

There are tens of thousands of families in Rio de Janeiro occupying derelict buildings all over the city. The local government estimates that there is a deficit of 450,000 houses in the metropolitan area, that is, 450,000 individuals or families living on the streets or, if they are lucky enough, in an occupied building. They simply earn too little to access the formal real estate market, and no government housing scheme has managed to alleviate such situation, so far. Things are changing, slow, but changing. Since 2004 there is a process of regularization of occupied public buildings. There are also resettling programmes that give the option of living in new housing estates in the city's periphery. By the end of 2008 there were some 20 public buildings that were given the status of housing estates of "social interest" and were given access to resources from the National Fund for Housing of Social Interest. It means that if Cristina and her neighbours get well organized and go through the process, they might get the chance to have legal electricity, water, bathroom, kitchen, garbage collection and sewage.

Some of Cristina's neighbours went to the new housing estates and came back after some months, because there are no income opportunities, transport is too expensive and basic social services are scarce. Cristina's partner left her with their two 7 and 2-years old children Igor and Tawany, and she manages to survive selling beer and other refreshments on the beach.