A Conversation on Transit and Suburbanism

I recently sat down with a former university tutor who has spent the last several years of his life acting as a champion for public transit. A civil engineer by training, he has devoted his recent academic years to the study of transportation planning and promoting more sustainable forms of transit across North America.

During our casual get-together, the broad region noted above was reduced to a far simpler conversation on Waterloo, Ontario; the small, sprawling Canadian city that has become world-famous for its ‘engineer-o-centric’ university and its continuing contribution to the high-tech industry. Research In Motion (RIM), the city’s most cherished mega-corporation, has transformed Waterloo from a small, historic farming village into a global center of telecommunications R&D with the innovative Blackberry. The University of Waterloo, one of two universities in the city, has proudly produced the university-dropout, founder, and developer of RIM and its technologies, and receives notable donations from this former student for various projects. 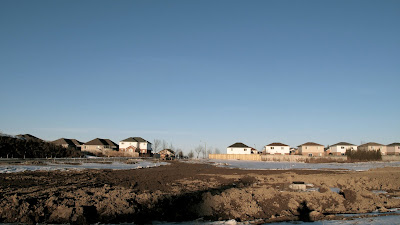 It goes without saying that the farming town is history, and the somber sight of suburban sprawl is all too visible.

My tutor and I met at a recently completed development “downtown”; a loft/condo conversion project that emerged out of an historic manufacturing warehouse. This type of urban development has become typical in this part of Canada, and although it detracts greatly from the historical integrity of these traditional buildings, it is often the last chance that these structures have before they are gutted and demolished to make way for larger roads and additional parking. 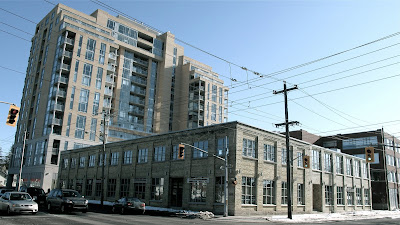 Waterloo is part of a twin-city network, which is made up of Kitchener and Waterloo and often referred to as “K-W”. An arterial spine, King Street, seamlessly connects the two cities and, if it weren’t for a small signpost, you wouldn’t know where one city stopped or where the other started. Waterloo is special for certain reasons and painfully standard for others. A significant portion of “Inner-Waterloo” is made up of students, many of whom vacate the city during the summer months, adversely affecting business for the endless number of pubs, bars, and cafes that line the city’s main street. But this demographic is vibrant, international, intelligent, and generally well behaved. “Outer-Waterloo” is a different sight, where suburban subdivisions claiming to be “middle class” communities showcase their neighborhoods, which are strewn with VWs, Volvos, BMWs, and roads. Lots of them. Though Waterloo-ites are generally proud and committed to their intelligent and worldly community, the same cannot be said for their interests in urban development and sustainability. 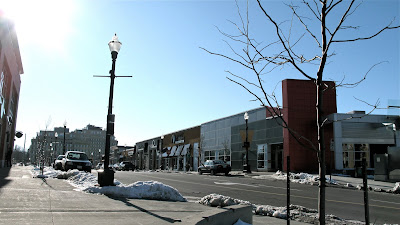 Back at our meeting, we focused our conversation on transit. Things didn’t start well seeing as I had to drive to this new development, which is conveniently located on the city’s main street. To no surprise, free parking was everywhere in sight. From where I was lodging, the closest bus stand was 7 kilometers away, and from there it was a further 2.5 kilometers to the restaurant. I was soon told that the current public transit fleet helplessly struggles to service the small percentage of population that uses it, and interests in expanding services, supported heavily by students and low-income families, are contested angrily by the wealthier, car-owning citizens.

My tutor voiced his frustrations on new plans for a light rail corridor that is to stretch down the length of King Street, the city’s main artery. Although he sees a project of great vision, opportunity, and vast community improvement, he has been greeted with incredible citizen opposition to the proposal. Cars over buses, cars over trams, and cars over social-welfare has been the response. 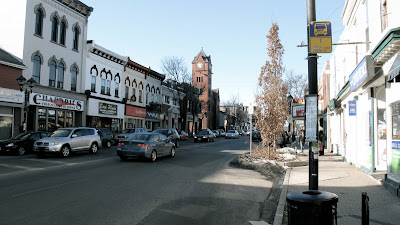 Stepping away from our conversation for a moment, I couldn’t help but feel that he was echoing the cries of many young practitioners and urbanists in North America. Whether it is poor or rich, red or blue, liberal or conservative, it seems that through research, education, and trial and error, the most promising and healthy urban future points towards a decrease in car usage, more compact cities, and an increase in public transit.

Is it a fear of using the service? Is it communist to ride a bus? Perhaps the word “public” is what has put the nail in the coffin for public transit in Waterloo. Perhaps the urbanists should reconfigure the vocabulary of autos to be more accurate of the “public” infrastructure and services involved with driving: “public roads”, “public highways”, “public snow-removal”, “public resurfacing”, and “public driver’s license”. 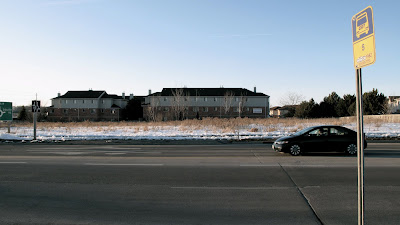 As I drove home from our meeting on an enormous four-lane road with a speed limit of 50km/h (30mph), I puttered past a lone individual standing aimlessly on the side of the road about 3 km’s from the city’s centre. I looked closer and noticed a small sign on the street post that said “bus stop”. I couldn’t help but sigh.