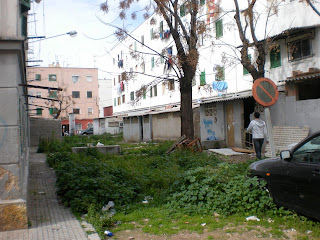 Last week I revisited the area popularly known as Corea, a zone of dilapidated buildings and streets known for its delinquency, drug use and social conflict among diverse ethnic groups that is the focus of an integrated urban rehabilitation project in Camp Redó I wrote about on Polis last December. The several hour visit, part of an assessment by the rehabilitation project’s social workers of rubbish strewn across the neighbourhood towards developing a clean-up campaign, raised a number of reflections and challenging questions for me. Regarding the latter, I hope Polis readers might have some insights, examples or thoughts to share. 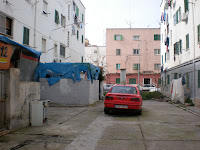 First, I was struck by the spatial adaptation of those living of the ground floor of many buildings, where people have constructed casetas behind their houses into shared common space. Some resemble huts (more or less sturdily built, see left and above photos), while others are well built and attempts are made to integrate them into the larger building structure (see photo at right). 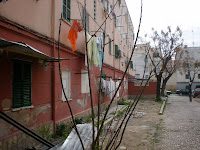 While building such casetas is illegal, no reprisals have been made (to date) although as we walked around several people popped their head out of upper floors and asked if they would be destroyed. For those in these upper flats these structures are unfair, as on one hand they are not able to do the same, and also clearly because the structures and people using them are in essence appropriating public space for private use. This has even been done on a main street, filling in an open space between the section of flats in the building and what used to be an infrastructural part of the same (see image below). 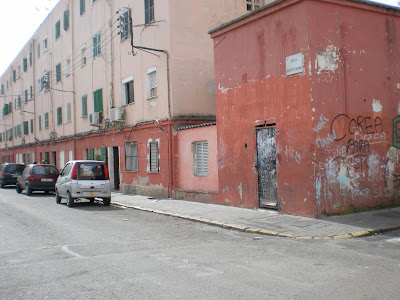 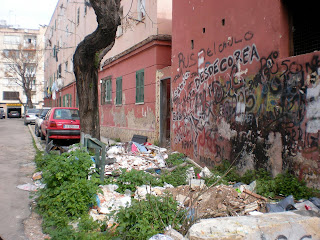 Regarding litter, it is unreal to see the quantity strewn about the area, and more so to all of the sudden stumble upon large concentrations that have accumulated sometimes less than 5 metres away from rubbish bins. For me, this speaks of an absence of ownership over or respect for the large community and surrounding urban space - for example at an intersection turning the edge of a building into an open bonfire space (photo below). It furthermore made me reflect on visits to different slums in Mumbai, where in some people kept shared public space and spaces around their houses almost spotlessly clean, while in others people toss their rubbish everywhere – such as in Corea, where I was told it is not uncommon for people throw their garbage (even bags) out the window. How can such behaviours be changed? How can a respect for community and public space be fostered in a context of diversity and conflict? 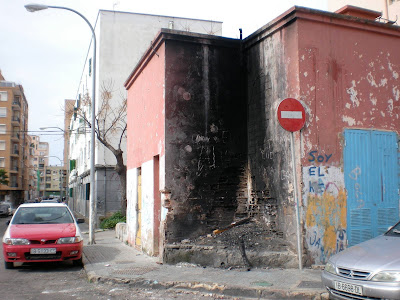 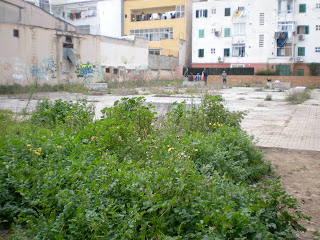 Finally, there is a great deal of ‘dead’ space in the area, and so much potential to turn these into ‘productive’ places – something I always think about when I see empty lots of abandoned spaces in the city. For example this space in the photo below. We noticed someone clearing the weeds etc. at the back of the area, and went to speak with them, to see what was going on. A friendly and interesting conversation ensued with those chatting and enjoying some beer on a sunny afternoon, giving ‘moral’ support to their friend cleaning the area – who it turns out has been paid by neighbours in the building behind to remove the weeds and plants growing there. When asked if they were helping, the response of ‘we don’t work for free, you know’ was given; and while I was thrilled to hear another say ‘hey we could be growing tomatoes or food here’, someone else responded ‘but kids would come and steal it, forget about it’. How does one begin to change such attitudes and perceptions? How is it possible to effectively foster or nourish more positive attitudes to such collective actions? Whatever happens it is certain that the future community and urban fabric of Corea will reflect positive or negative mass behaviour change in the area.