The Cineroleum: An Urban Takeover 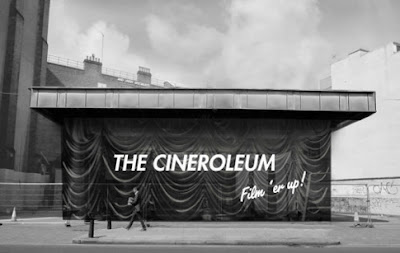 This summer the site of a derelict petrol station in London has been reclaimed and reconsidered in an urban takeover that addresses a site in transition.  This former filling station on Clerkenwell Road fell out of use, and the site it occupied promised to be caught in a blank stasis until economic incentive and planning approval allowed for its redevelopment.  In the meantime, a group of young artists, designers and architects breathed new life into the physical fabric and public meaning of the site by converting it into a cinema, showing films from August 20 - September 12.  An efficient and inventive use of material meant using the existing roof structure as both the shelter and boundary area of the cinema.  The wooden chairs and shutters that provide enclosure were collected and assembled from recovered building materials.

This project demonstrates the benefits of collective action in the small-scale resilience of the urban fabric.  While top-down institutions of planning and economic development will eventually shape the site with a long term vision and more permanent built enclosure, this propositional design not only reclaims this valuable city space for greater public benefit, but it also ignites speculation as to the future of the site.  The wider idea of the functioning space also posits an interesting critique of the status quo.  Offering £5 tickets to carefully selected documentaries, classics and contemporary films in a unique atmosphere highly referential to the culture and history of cinema, why is paying £10-16 for a West End movie theatre a pervasive and dominant experience of moviegoing in London?

Perhaps the Cineroleum also tests the reclamation of the city in a post-petroleum landscape. Extrapolating this concept to all the vacant lots that would be produced by out-of-commission petrol stations provides an enticing palette of possibilities for the urban designer, the artist, and the citizen.  It is empowering to consider hundreds of sites re-entering the realm of the possible, to be shaped by a genuine right to the city - the power not only to access the city and its resources but to change them.

Credits: Image of 'Film 'er up!' from The Cineroleum. Photo of petrol station from Google Maps. All other photos by Andrew Wade.