A Playful Take on Serious Matters: The Center for Urban Pedagogy

Collecting my thoughts after six months as an architectural reporter in New York City, one of my most memorable encounters was undoubtedly with the Center for Urban Pedagogy (CUP). I wrote three articles on this Brooklyn-based organization, two in print and one online. What makes this non-profit so special is the way it combines art, design and visuals toward its well-targeted goal: to demystify the complex mechanisms of the city. With a strong emphasis on public participation, the relatively small core of staff starts several projects by teaming up with another NGO, specializing in a certain issue in the city. Together they track a critical issue that needs further explanation. 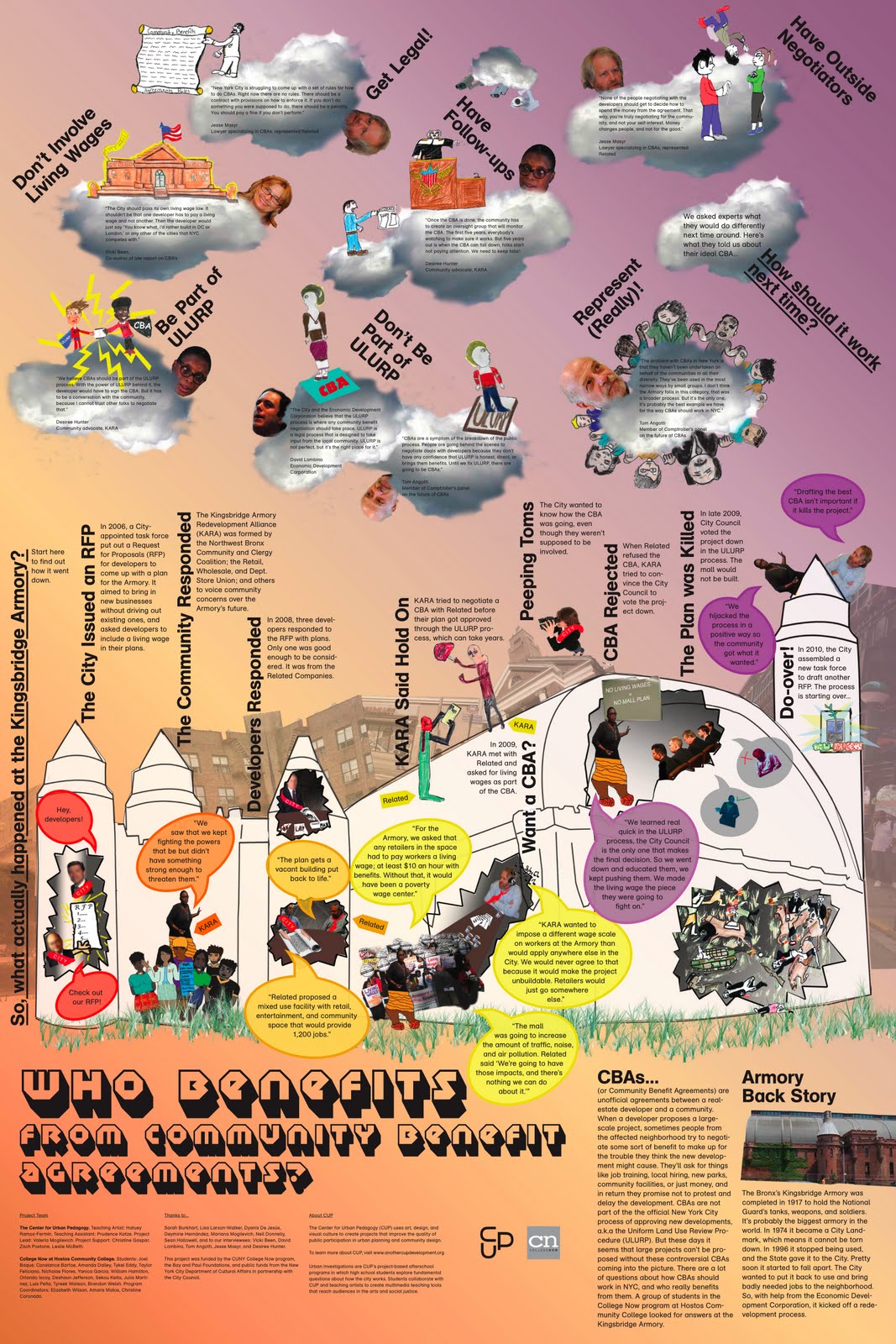 Last summer, 15 Bronx public high-school students came together to break down the Community Benefit Agreements, CBAs, which are unofficial agreements between a real-estate developer and a community. The result: an educational poster.

One outcome of this strategy is the project Making Policy Public, which includes a series of foldout posters that are published four times a year. Created in close collaboration with policy advocates and design professionals, these posters are giving much-needed answers to vulnerable groups in the city. One issue, for example, called “Vendor Power!” explains the rights of New York’s circa 10 000 street vendors. Another recent triple-launch focus on non-citizens, youth, and formerly incarcerated people–outlining the situations they face on the fringes of the criminal justice system with titles such as “I Got Arrested! Now What? and “Immigrants Beware!” 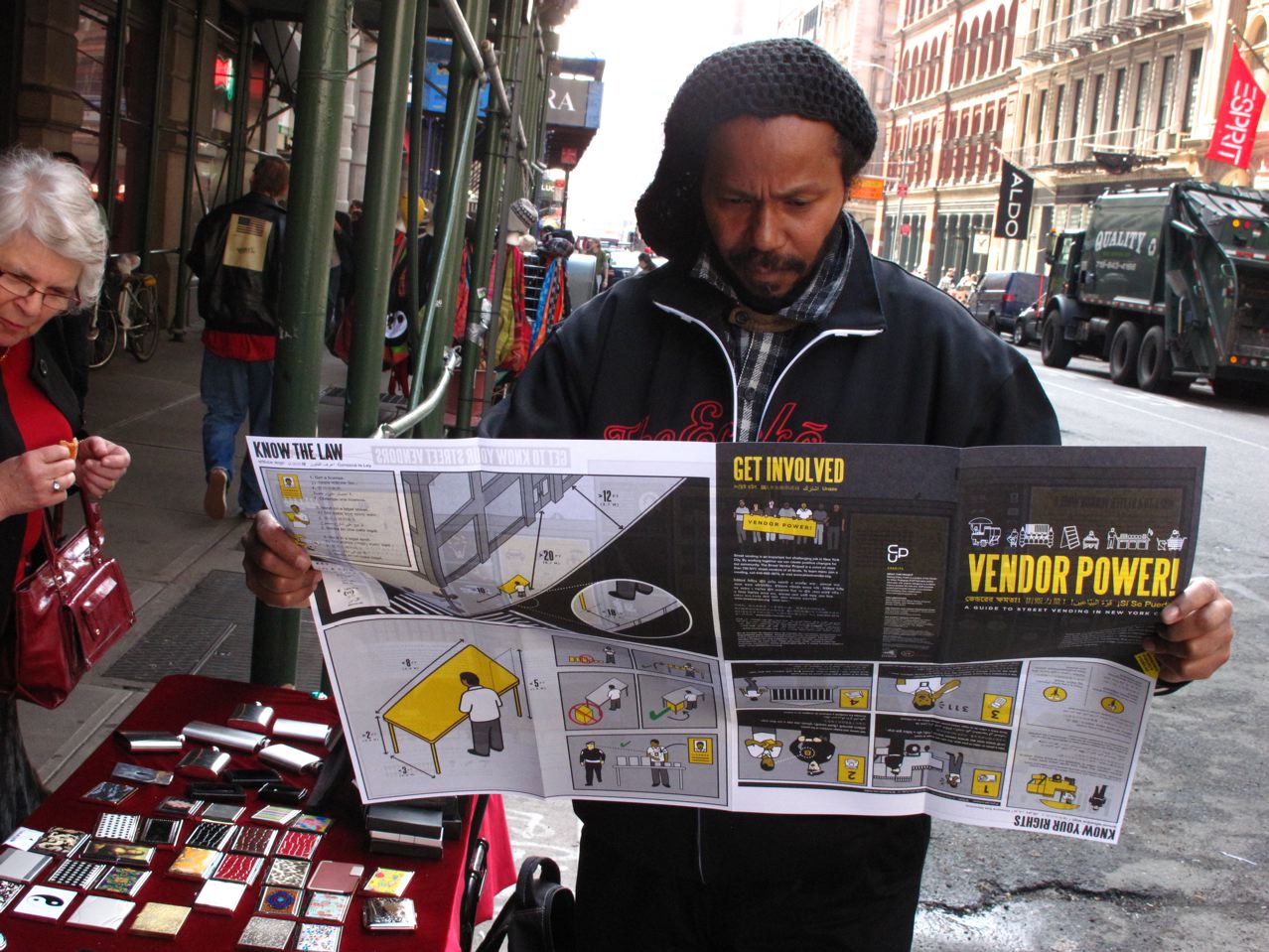 The foldout poster Vendor Power! was designed by Candy Chang and included in the National Design Triennial at the Cooper-Hewitt in New York.

CUP is also engaging the community through workshops and other teaching tools. On a slushy Friday last February, I participated in one such workshop, in connection with the launch of the Affordable Housing Toolkit, part of CUP’s Envisioning Development Toolkit series. In an empty corner store on the Lower East Side, CUP staff member John Mangin explored the mechanisms of the city’s affordable housing policy together with a group of housing advocates, who aimed to use the kit to educate the tenants they already worked with. Opening the red box we found a colorful felt chart, an informational book, and a postcard with the address to an online map. The purpose: to teach participants about income demographics, rent levels and the technical definitions of affordable housing–thereby empowering them to dare to ask the crucial question: “Affordable to whom?” 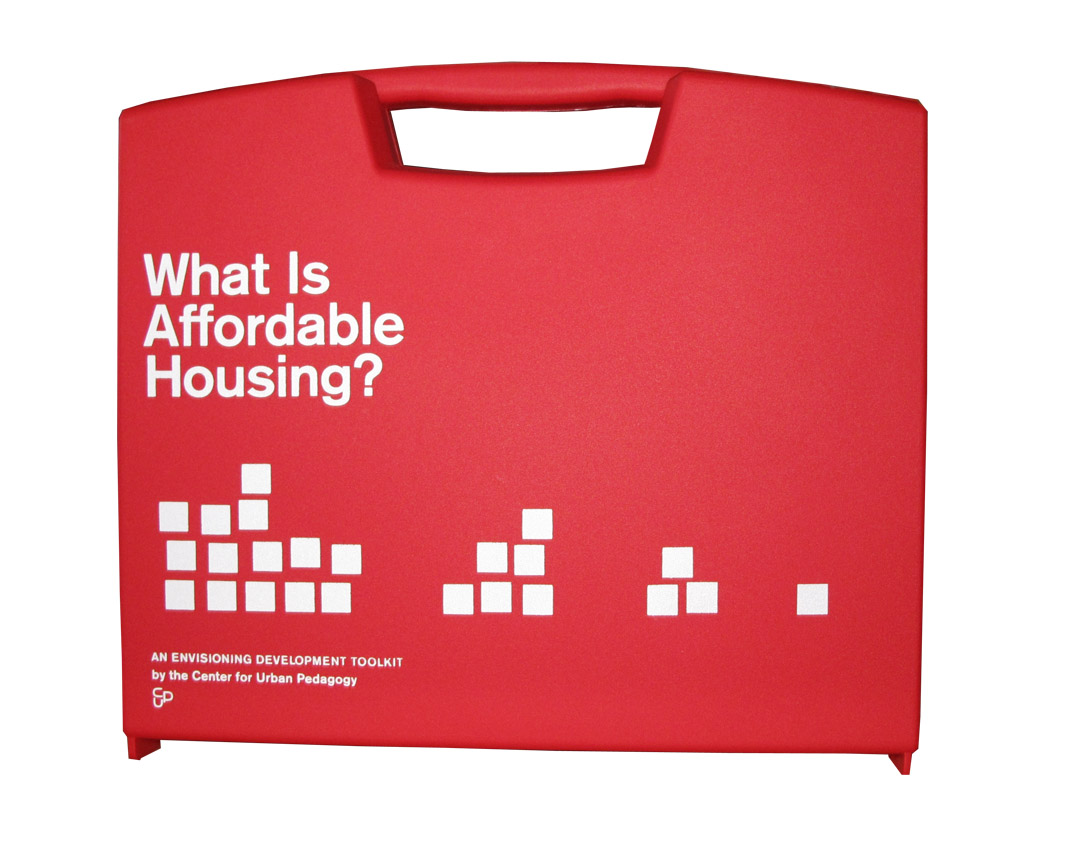 The Affordable Housing Toolkit, from 2010, was designed Glen Cummings of MTWTF.

John Mangin, who has a background in policy and law, said that in the last few years the government has been getting better at recognizing its obligation to educate the public. Nevertheless, many decisions are made without adequate public participation, even if there are channels written in the city and state law for public participation to happen. “Our mission is kind of twofold,” he said. “First, we want to help people understand how things work. But secondly, we would like people to want to participate. And that’s where the designers and artists come in.” 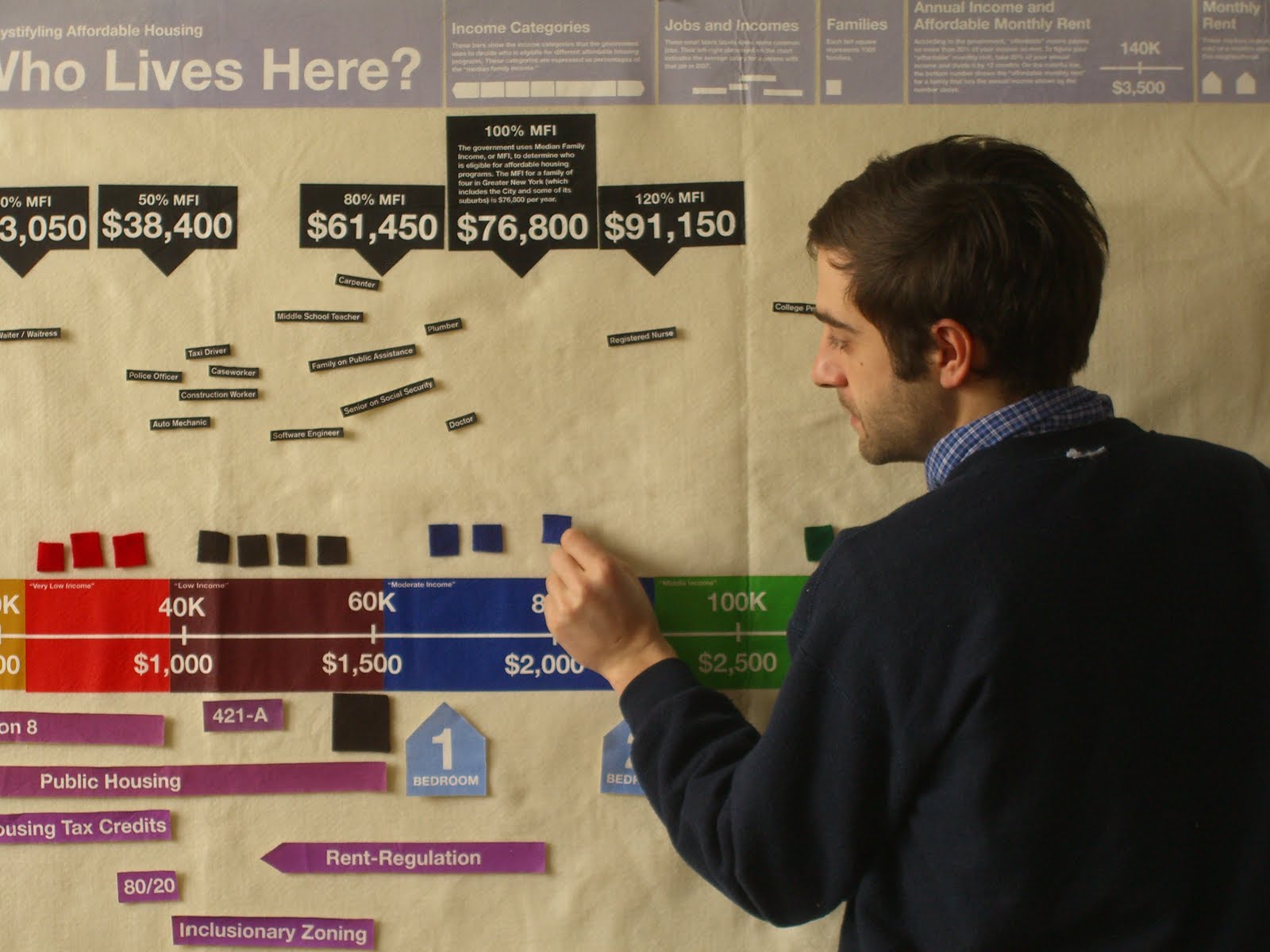 But it is not only graphical experts that make CUP’s urban education so engaging. Another branch is the youth education programs, varying in length with a reach of over 500 students each year. Here, the students themselves create the educational artwork, ranging from videos to comic books, models and exhibitions. In the longer “Urban Investigations” the students make site visits and conduct interviews with the help of a teaching artist. The programs are focused on specific questions: Where does our garbage go? Can illegal basement apartments be legalized? Why are there homeless people when some buildings stand empty? 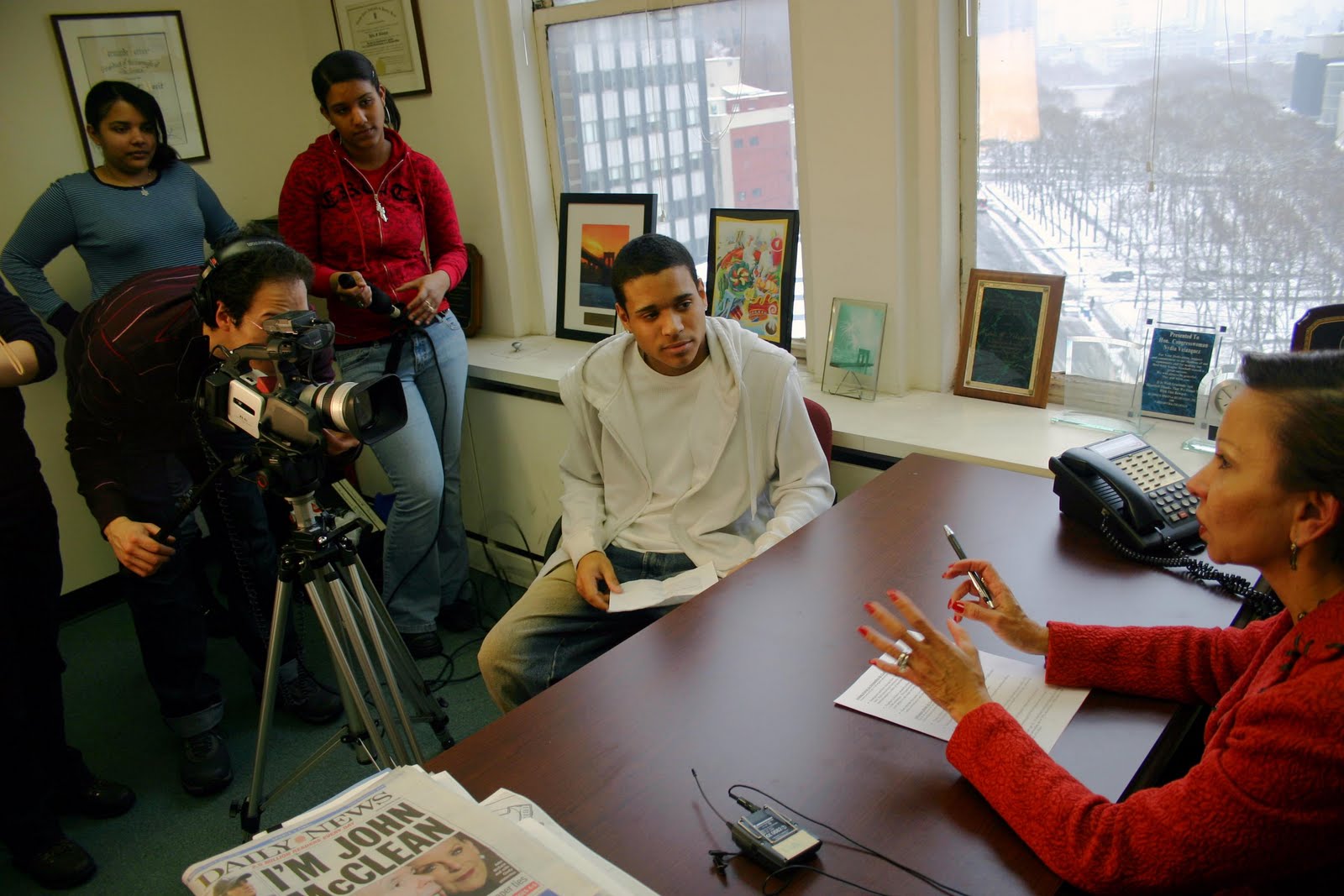 In the spring of 2008, students from New Settlement’s Bronx Helpers interviewed officials and researchers on the food that is sold in the bodegas of Bronx. The project resulted in the film “Bodega Down Bronx.” 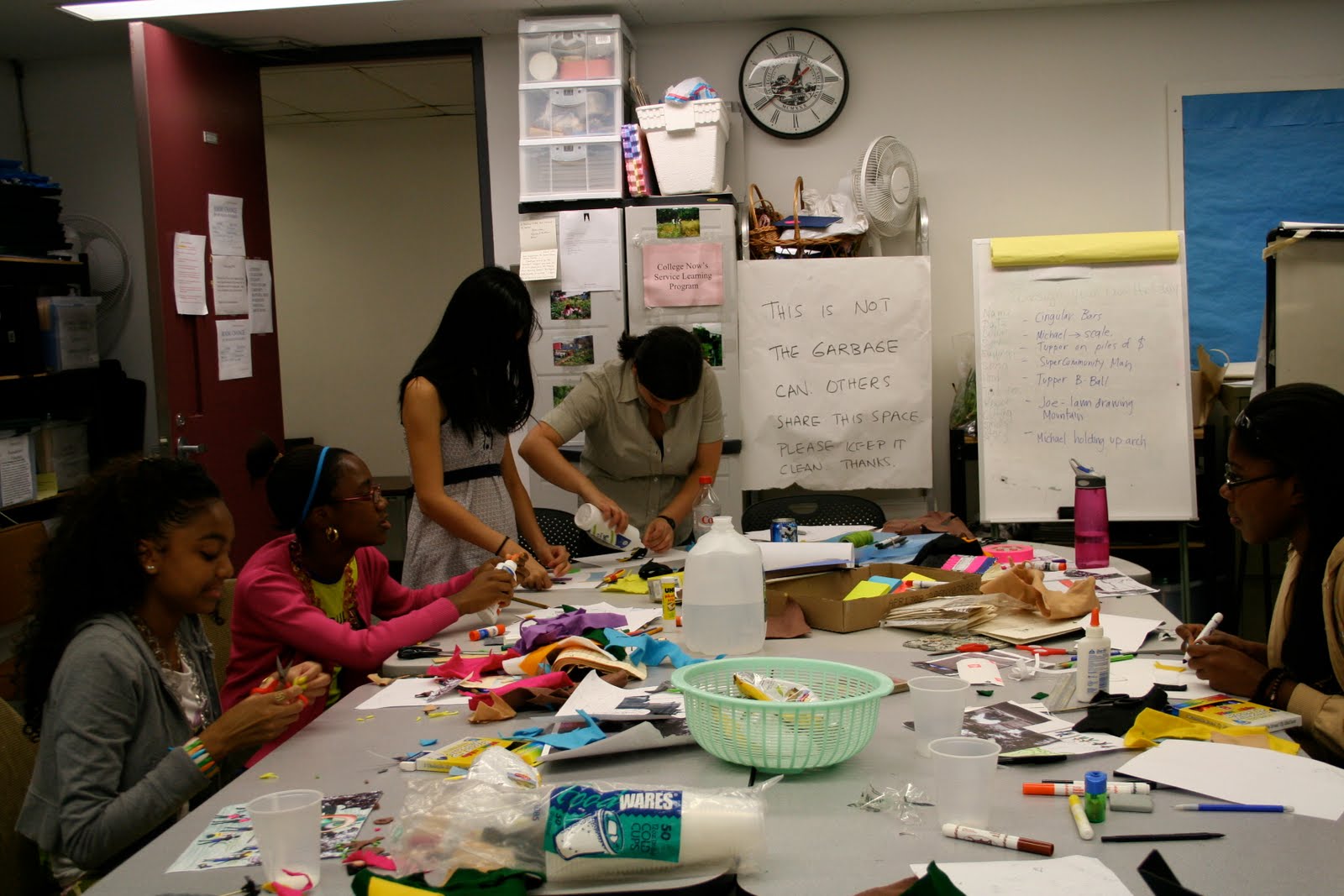 In the project Re-inventing Grand Army Plaza, from 2008, students from College Now investigated what it would take to be allowed to build on the old square in front of Prospect Park, Brooklyn.

Three weeks after the toolkit workshop, I rode my bike to an old cannery in Brooklyn to meet with Christine Gaspar, CUP’s Executive Director. Surrounded by semi-finished sewage models, piles of Lego, golden paint bottles and rulers, she explained why she decided to join CUP in 2009, after providing architectural and planning services to low-income communities recovering from Hurricane Katrina: “The more people that actually understand how the city works, the more people can be represented in shaping it–whether it is through their vote or holding the developers or elected officials accountable for their actions,” she said. CUP’s persistent work–creating playful products on serious matters in collaboration with those that want and need to know–makes an important contribution to the democratization of the city. As Christine Gaspar put it: “We cannot put money in people’s hands–but we can give them power through knowledge.” And while the CUP staff are continuing their work in their little office in the Gowanus plant, hopefully similar strategies will follow in other cities.