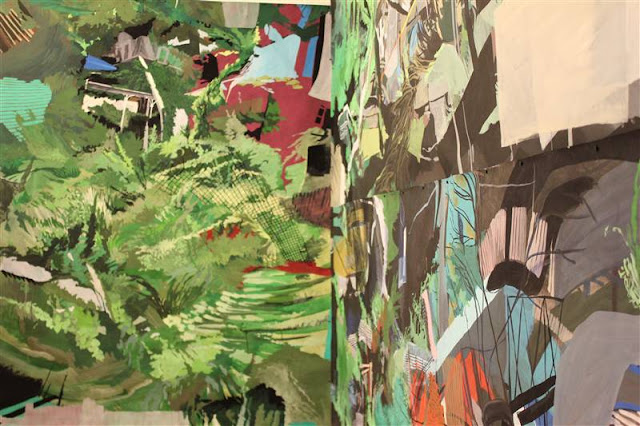 As part of our "featured artists" series, we're gradually building a collection of work that might be interesting to see in cities. In the case of Arden Bendler Browning, I also enjoy seeing cities through her work. She shatters urban settings into hurricane frames, exposing false divisions between humans and nature. As she explains in a few passages from her artist's statement...

"The urban environment is a sea of fluctuating boundaries arguing claim to the demarcation of space as 'wild,' 'inhabited,' 'private,' 'public,' 'forbidden,' and 'open.' I make sprawling wall-sized and room-sized paintings on Tyvek as a direct response to this environment. My imagery is derived from actual and virtual meandering throughout fringe neighborhoods within Philadelphia."

"When I am walking with my young twin daughters, my attention is directed at the minutiae that they find so wondrous (often a bit of trash), while also darting ahead half a block to check on the faster, more energetic child, and periodically looking behind for the more attentive, slower paced child. I have chosen to live in a city precisely because it means that I access (and bypass) a rich variety of neighborhoods and environments each day, via the different levels of attention of my role as driver, passenger in car or on train, or pedestrian. I am acutely aware of the fact that by pursuing one path to get from one point to another, I am traversing a forest with multiple perspectives and paths."

"Cities have attracted me for their density, activity, variety, their layered contradictions…there is never enough to give me a definite understanding of my immediate environment."

I find it interesting that Browning emphasizes cities when describing her work. I love the part about experiencing places in new ways through the wonder and excitement of kids. This reminds me of an unexpected meeting a few days ago with two high-school classmates. I was trying to identify plants in a small courtyard, when two ecstatic kids with big eyes and curly hair came sprinting through the trees. For some reason they looked vaguely familiar. A few seconds later I found my classmates along the path, just within view of their children.

In mentioning Arden Bendler Browning, besides adding a talented artist to the archive, I hope to become similarly aware of my environment, relating with it thoughtfully and playfully.