Notes on Opa-Locka: Fundamentalism in the City 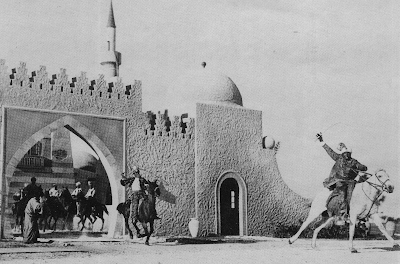 The potential burning of the Koran on the commemoration of the 911 attacks set in motion a controversy of global dimensions that underlined the intersection of spectacle, memory and conflict in urban space. This inflammatory gesture in a day of solemn remembrance represents the staging of fundamentalisms circulating in our own backyards. In this post, I offer a window to place that blurs the political relations that bind symbols, memory and built form in the city.


The city of Opa-Locka is one of 35 municipalities, which together with unincorporated areas make up the fragmented metropolitan region of Dade County. Generally recognized simply as Miami, this region comprises tourist destinations such as Miami Beach and Coral Gables. Opa-Locka, located at the northwest corner of Dade County, was developed during a period in Miami’s urban history when the aesthetic branding of newly planned suburban communities attracted investors, speculators, visitors and new residents to Miami’s burgeoning urban frontier. The city grew westward from Biscayne Bay, through the design and incorporation of new cities. In this way, Miami’s early 20th century urbanism transformed vast swaths of oolithic limestone, swamp and mangrove vegetation into modern theme oriented design utopias.


This storyline defined Miami’s urban development during much of the early 20th century. Yet, what exemplified Opa-Locka, in this urban puzzle of thematic urbanism, was the aesthetic signature it adopted. Miami Beach took on Art Deco, Coral Gables embraced the Mediterranean Revival Style, but Opa-Locka’s urbanism was deeply influenced by Moorish Revival arabesque architecture. The details, forms and motifs, which adorn its main public buildings and many of its residences represent a fantastic collage of Middle Eastern icons. In fact, Opa Locka contains the largest concentration of Moorish style architecture in the western hemisphere. Up to 20 structures –residential, retail and public buildings -are historically designated in the US National Register of Historic Places.

Far from a symbolic gesture driven by politics, religion or ideology, Opa-Locka’s emblematic place-making derived from a shrewd profit-driven scheme. Its vision was the work of Glen Curtiss, a renowned early 20th century aviator/entrepreneur who invented the aileron. Curtiss came to South Florida in 1916 with the intention of opening an aviation school (1). Miami’s geographic location close to the Caribbean and Latin America, offered the perfect base for the creation of an airline industry ready to embark on a hemispheric path. 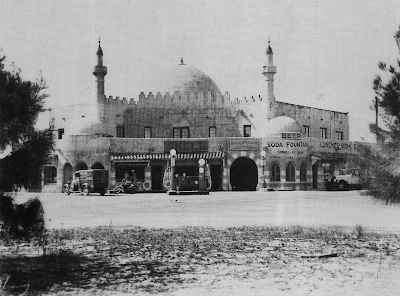 Opa-Locka was Curtiss’ third speculative land development in Northwest Dade. The original name of Opa-Locka was “Opa-tisha-wocka-loca”, a Tequesta word meaning “big island covered with many trees in the swamps”. When Curtiss began to plan the city on 120,000 acres of farmland, he envisioned: “The most perfect city that planning and engineering could achieve and the most beautiful that the art could conceive” (2).

Such sales pitches were common in South Florida during those days of rampant urban growth. To make it happen, Curtis asked his architects and engineers to gather inspiration from the book “One thousand and one Arabian Nights”. In Opa-locka one finds streets named Baghdad Avenue, Ahmad street, Ali Baba Avenue and the main boulevard called Sharazad (shortened from scheherezade). The buildings were simple wood-frame structures covered in the conventional stucco coating typical of South Florida. Nevertheless within these material limitations, minarets were built, Syrian arches were constructed and arabesque parapets were assembled.

In 1926, a hurricane ripped through South Florida ending the development boom and with it Curtiss' enchanting fairytale. After World War Two a military air force base which had supported the city's economy closed. Opa-Locka, never truly recovered. Today it remains one of many low-income communities in Miami bound together by the shared values of history, economic marginalization and hope. In many ways the story of many other urban communities in American cities.


On February 17th 2009, Opa-Locka commemorated the election of the first African American US president by renaming one of its streets Barack Obama Avenue. Close to that street, the doorway to a Veterans of Foreign Wars Post and the lobby of the old train station mimic the entrance to an islamic temple. Some blocks away, an american flag waves next to a fake minaret in the grounds of City Hall. Opa-Locka makes us ponder about the complicated ties that connect place, national belonging and politics unveiling contradictions and paradoxes. Its history of aesthetic appropriations and the reality of its contemporary urban struggles challenge fundamentalism in the city.

(1) and (2) From Wilderness to Metropolis: The History and Architecture of Dade county (1825-1940) Metropolitan Dade County Office of Community and Economic Development Historic Preservation Division.