I spent part of the last two days at CEO's for Cities "Urban Next Summit", an intimate gathering of a hodgepodge of both professional and nonprofessional urbanists from around the United States (and a few token Canadians). Hosted by the San Francisco Planning and Urban Research Association (SPUR), attendees, who had to apply to attend but who paid nothing to do so (save travel expenses), split their time between formal presentations and breakout groups designed to brainstorm ideas centered around CEO's for Cities newest campaign — the US Initiative.

US in this case is a double entendre — referring both to the nation it is intended to rebuild and reimagine (through better urbanism, city building and a rethinking of the American Dream) and to the actors involved — the proverbial us. But one question that was rarely asked, at least not in any serious way, was who is this us? The irony of a group calling itself "CEO's for Cities" launching a "for us, by us" campaign in the name of everyday Americans seemed lost on everyone. If everyone wasn't so earnest and nice, I would have felt as if I was in a live-action parody of a David Harvey book.

Yet the issue here is not simply whether this group - which is more university president and foundation head than corporate titan - should be spearheading a popular campaign to reinvent how we live. Many of the ideas they promote - liveability, connectivity, opportunity through transit, biking, DIY urbanism, pedestrianism, arts, culture, good design - are ones most of us have endorsed in the virtual pages of Polis. Nor is this a canned critique of neoliberalism - public-private partnerships and an active non-state urban activism are as old in America as cities themselves.

But throughout the conference, the word "progressive" was used from time to time, by both SPUR and CEO for Cities, despite few explicit references to social justice, poverty, inequality, despite a rhetoric surrounding talent, creativity, capacity and clustering that owed far more to Richard Florida, Michael Porter and Amartya Sen than to Henri LeFebvre, Peter Marcuse or john powell. Can a campaign and a convening that does not explicitly include either the poor or issues of poverty be called progressive?

Both out of respect to my hosts, who were kind enough to have me and feed me over a course of two days, and in the interest of debate, I hope that this comes across as the question that it is meant to be, even if my biases (both here and in previous posts) are somewhat clear. It is certainly a sore point for SPUR, an organization with a storied yet checkered past, one that includes so many of San Francisco's truly legendary reformers but also a period in which, as the San Francisco Planning and Urban Renewal Association, it provided some of the intellectual weight behind a federal and municipal bulldozer which gauged massive holes in the African American community, wounds which are still felt to this day. But I have many friends, colleagues and co-conspirators who are active parts of SPUR and similar "mainstream" organizations who would argue that their more conciliatory rhetoric is more "progressive" because it can reach across ideological divides and does not fear development, business or capital. 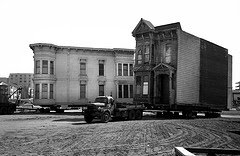 It is an issue which goes beyond urbanism to broader questions of development and democracy, and which is far more important than simply a question of labels or semantics. What exactly does it mean to be progressive in the contemporary urban environment? Do those of us who cling to a critical urbanism that demands overt conversations about injustice and inequality risk losing something if we define out those who do not? Or is the concept of progressiveness at risk if it can be stripped of these once core issues? At the very least, it is an important question, one which unfortunately was left off the table this week in San Francisco.

Credits: US image from CEO's for Cities. Photo of urban renewal from Dave Glass.