This sixth post on the topic Gender and Water in the water and sanitation Program in which I am involved is about the role of Ecuador’s national government technicians in integrating a gender approach in national programs, policies and laws. Through the Program, Ecuador’s National Water Secretariat (SENAGUA) will be supporting local women leaders in influencing the management of watersheds. The Program is also inviting these women, as strategic allies, to watch the compliance of water-related rights in their localities. 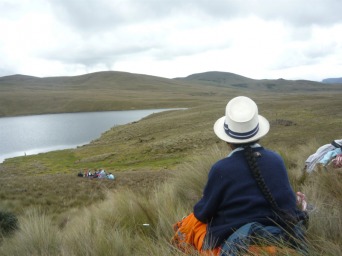 The Ministry of Urban Development and Housing (MIDUVI) will be creating precedents of community-run water utilities (JAAPs) that are exemplarily managed by empowered women. We also intend to strengthen women organizations with the aim of making social control of JAAPs and municipal utilities more effective. The Ministry of Public Health (MSP) will empower local women organizations and leaders so that most initiatives and measures of water quality control come from women.

In most countries there are laws, national policies, local ordinances and plans aimed at reducing gender inequalities. However, very few allocate the necessary resources, either human and/or financial, that are needed to bring about significant changes in the relations between men and women, from the household to the community and the economic and political life. The Program is itself an example of this limitation. The experience described in this series is an initiative of the regional office of UN-HABITAT and is funded mainly with resources not foreseen in the Program’s budget, despite that the Program has a strategy, specific indicators and some small direct actions supporting local women organizations.

I do not expect national institutions to create a specific budget and professional team for mainstreaming gender in their plans and policies. However, this experience is setting a small precedent and it will open the eyes of some influencing professionals, hoping that in the future they will support mainstreaming gender initiatives in other national programs, policies and laws, with sufficient resources and specialized teams.

An extended version of this post will be published on CoLab Radio.

Credits: Image of an indigenous woman watching a protected area in Ecuador’s “paramos,” the most important source of fresh water in the country, from luchaporelagua.com.