Lifeline for Caracas: An Interview with Urban-Think Tank 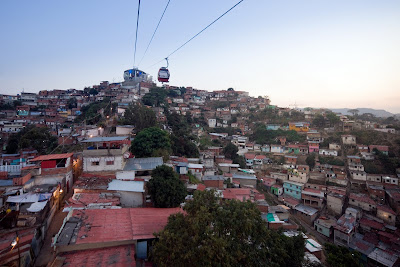 In Caracas, Venzuela, the skyline has changed. Today, not only white clouds hang over the steep hills but also tiny red cable cars, rapidly sliding through the air. In this capital of five million, about 60 percent of the caraqueños and caraqueñas live in informal areas. Due to their unrecognized status, these settlements have never before been formally linked with public transit or other civic services. But with the new funicular transit system, the barrio of San Agustín, with its 40,000 inhabitants, has been connected with the central city below.

Behind this high-flying project is Urban-Think Tank (U-TT), a design practice with offices in Caracas, São Paulo, New York, and Zürich, dedicated to high-level research and design in places of conflict where architecture needs more attention. The co-directors Alfredo Brillembourg and Hubert Klumpner are teaching at Columbia University, where they founded the Sustainable Living Urban Model Laboratory (S.L.U.M. Lab). Since July 2010, they hold the chair for Architecture and Urban Design at the Swiss Institute of Technology, ETH in Zürich. 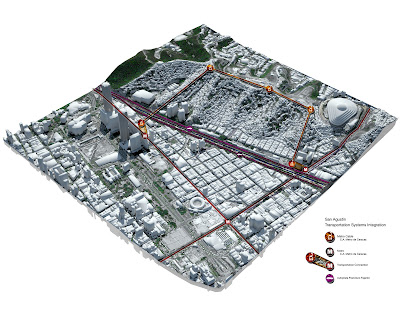 The two architect-activists proposed the cable car system in 2003, a time when the official planning strategy in Caracas sought to gradually link the barrios to the rest of the city by creating new surface streets. But in the analysis of Brillembourg and Klumpner, a demolition of 30 percent of San Agustín’s dwellings for road construction could never be a part of a sane solution.

As president Hugo Chávez embraced their cable car concept, an Austrian gondola engineer could begin implementing the system in 2006, and in January 2010 regular service started. So far five stations have been built, making it possible for the dwellers of San Agustín to easily make their way to schools and work places. A longstanding social divide might finally be bridged.

Polis reached Alfredo Brillembourg and Hubert Klumpner for an e-interview on a Swedish prize, the Metro Cable system and the lessons to be learned in a new urban world.

In late August, you were awarded the 2010 Ralph Erskine Award from the Swedish Association of Architects for your many socially and ecologically concerned design innovations. Which is your personal relation to the Swedish-British practitioner Ralph Erskine and his architecture?

The concerns of the Urban Think Tank have always been close to the ideas of Ralph Erskine and Team 10, thus we have embraced the complexity of the “informal city”. In the opinion of Erskine, the functional city let slip through its mesh too much of what constitutes life. His thinking revealed that as modernist he was committed to dealing with reality “as it is” which, as he understood at the time, meant dealing with the particularities of a time and place, the problems of “the great number” in postwar society, and the complexity of “daily life.”

Our approach to the Global South resumes the battle where Team 10 left off acknowledging and introducing the need for greater complexity in the planning agenda of the modern city. Urban Think Tank is actually wrestling with the rethinking of the architect as interpreter and facilitator of the needs and desires of a particular community to its fullest extent. While our values are identical to those proposed by Erskine, we are taking on what Team 10 left out: more politics, more economic reality, and more complexity.

Your Metro Cable system is one of eleven projects included in MoMa’s exhibition Small Scale, Big Change: New Architectures of Social Engagement, on view in New York from October 3 through January 3, 2011. With the funicular installed, which has been the most important improvement in the lives of the inhabitants of Caracas?

With our U-TT toolbox of projects, we propose a working method for a new supportive architecture that empowers people at the margins of the global south's emerging cities and promotes sustainable development in slum areas. This toolbox is an integration of replicable projects like the Vertical Gyms in Caracas and the Metro Cable urban transport system that have decreased substantially the crime rates on the implemented area while facilitating social integration and physical connections. The simple fact that people can now see everything from the air has made a big difference. Urban safety comes not from police but from the eyes of the community. This was something Jane Jacobs used to say about community building.

The residents of San Agustín were involved in the planning of this new transport system. How did you carry out this participatory process? Which obstacles did you meet?

When we started our work in South America there where few people to tell us what to do. The biggest challenge was convincing politicians and Metro engineers to think creatively. We wanted to move faster and this was not possible. But we understood from our slowly growing experience of the slums, that access was the biggest issue. No one believed a cable car was useful as a transport system. At U-TT we believed that architects must believe in what they do. We call this a "realizable utopian" thinking commitment. To be active advocates and agents of change, especially for the urban poor in our fast growing crowded urban centers. And so we did what seemed to be necessary, which was to get involved and go every day into the slums to document the live and the environment that exist there and to record both the problems and the potentials and possibilities that exist there. What we have found there was a city of urban pioneers.

In your opinion, which are the mechanisms within informal neighborhoods that architects need to consider the most?

The first step in exploring and deploying that potential is to ask a great many questions, in person on the ground. The informal city does not yield information or knowledge through traditional methods; satellite images are too broad and surveys cannot be conducted with any fidelity because slums are in a process of continuous transformation. So we make proposals and knock on doors. Moreover, first-hand experience and exploration is the best way to give the next generation of architects a genuine understanding of the 21st-century city. We take our students into a territory that they would otherwise never consider entering, and work with them to creatively solve problems with the residents.

Informal settlements are not only important to us because of their problems resulting from population density and unprecedented scale but also, because we have found there people with a strong desire for collaboration and open minds for unorthodox solutions. We also think that the creativity and productivity is a driving factor for a whole other spectrum of change. The slums of South America can and will be examples of change not only for their own good but as examples reinventing how a city at the beginning of the 21st century can work for the greater part of the urban population, because of their model character in producing social density at the core of our challenge for architecture in the global south that can no longer be ignored.

Future generations will judge U-TT's success by the applicability of the solutions and their capacity to improve living conditions for everyone, everywhere. The challenge is waiting for us in the slum areas in the large megacities of the southern hemisphere; it is waiting for us not only in Caracas, but also in São Paulo, Mexico City, Jakarta, Mumbai, Lagos, and Johannesburg. In our view, if we are not thinking about the future in and with the countries of the south, then we are simply not thinking about the future at all. We believe that cities in the so-called developing world present today the greatest opportunities for change through design. Financial investment alone cannot eliminate problems. Design can often make the largest impact, but most significantly, our initiatives want to change the consciousness of people.