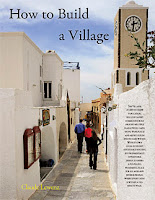 Claude Lewenz has dedicated much of his life to developing the concept of VillageTowns, an alternative approach to urban sprawl departing from questions such as why and how we do and should build communities. The suburban and vehicle-dependent growth model that emerged in the US after World War II has run rampant and obviously resulted in dozens of societal and ecological ills all over the world, for which alternatives like ecovillages and co-housing (among many others) have been proposed as solutions. With some similarities to new urbanism, Lewenz has created his VillageTown approach with instead a more mainstream appeal, yet still having many of the needed actions towards facilitating more sustainable living.

Inspired by Aristotle’s concepts of a good life, Lewenz bases his VillageTown model on principles of conviviality and citizenship plus artistic, intellectual and spiritual growth. These ideals, as well as enabling people to provide for economic, social cultural well-being while protecting and preserving environment, are reflected in the proposed urban design: human scale dimensions, no cars allowed within enabling smaller, pedestrian streets (i.e. below), plazas as public spaces to encourage interaction, and many others. From various studies Lewenz found that the optimal population for a village providing face-to-face contact and mutual aid is 500 people, while that of a town is 10.000, a size that adds economic, social and cultural enrichment. The VillageTown is thus created in this conglomeration of 20 villages into a town foreseen to cover 500 acres, 125 of which are urban, 325 greenbelt and 50 industrial, freight depot and motorpool (cars cannot enter the VillageTown), with a community-organised governance system. 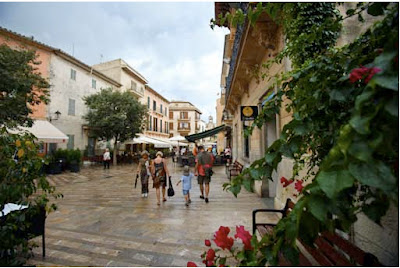 While this approach is interesting as a replacement for building new suburbs, industrial estates and so forth, one of my big concerns is how we use the already existing built environment, that is how we can reclaim, reinvent and reuse the large amounts of built areas that exist at present. In this light, it appears that the VillageTown approach has been developed through a narrow lens with little reflection on how it connects into bigger social change movements, such as Transition Towns and Degrowth, that seek a broader societal transformation reflected at multiple levels (social, environmental, physical etc.), changes we desperately need considering the challenges we face with climate change, ever-growing social inequities and many others.

The VillageTown model works clearly within the existing capitalist framework – reflected in Lewenz’s stated goal of turning real estate development upside down (or right-side up) – with a proposed house in one of these new areas costing $250,000. This price tag makes me wonder how diverse such areas would end up being, perhaps instead creating neo-ghettos of privileged people able to ‘buy in’ to such a development. It is easy to think romantically about the concepts of community and citizenship, and unfortunately most of what I have heard or read about VillageTowns falls into this trap.

The projects currently underway in the US, Australia and New Zealand are still at the early stages; experience will tell how the VillageTown concept functions in practice.