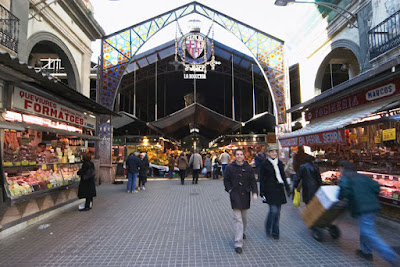 Markets and open commercial areas usually are the most lively spaces in cities. Personally, in my home city or when traveling, I enjoy going to food markets to buy fresh food, articrafts and eat. I also enjoy going shopping to commercial streets and squares, where I feel I'm merging in the city and its society. I enjoy talking to the sellers and people around, hear varied music, listen to different languages, feel different smells, taste popular and unknown foods and sit on a terrace and watch people walk by.

In the second half of the past century a new way of organizing commercial space arouse all over the world that challenged traditional markets and commercial open areas. The modality, commonly known as shopping centers or malls, is about concentrating shops and supermarkets within blind gigantic buildings, isolated from the outer world and often surrounded by parking lots. From my understanding, this type of organization of commercial space responds mainly to the following factors: urban sprawl and sectorization caused by the overwhelming power of the car industry, domination of commerce by few large companies, and no support given by city authorities to open commercial areas and traditional markets.

This trend has happened in almost every corner in the world, and can be understood as a spatial reproduction of social classes. Indeed, commercial spaces in cities are often divided between those for people with a car and those for people without a car. In Asia, Europe, Africa and Americas I have heard people who have a car say that they don't like to go to traditional markets and commercial streets because they don't like the people there (they usually say they feel unsafe). I've had the chance to experience this urban situation in Beijing, Hanoi, Bangkok, Mumbai, Accra, Sao Paulo and Quito.

In the past two decades there have been efforts to counterbalance this situation with investments (public and private) in traditional markets and commercial streets, with the aim of rehabilitating degraded neighborhoods, stimulating the local economy or as part of real estate investments. Some notable examples are Barcelona (Spain), Cuenca (Ecuador), and Retrofitting Suburbia Project in the US.