Just over a year ago, in mid-September 2009, the first new ‘rural city’ known as Nuevo Juan de Grijalva was inaugurated by President Calderón and other high level officials in Chiapas, Mexico, amidst great fanfare. The 410 families that moved into Nuevo Juan de Grijalva came from eleven surrounding localities characterised by their isolation, difficult access and proneness to flooding – where one such event largely destroyed one of the villages from which residents were relocated. This first rural city’s inauguration heralded the official start of a larger federal and state project known as ‘Sustainable Rural Cities’, whose premise is to centralise what are now extremely dispersed and impoverished local communities towards meeting the objectives of the UN Millennium Development Goals (MDGs). Indeed, according to the UN, Nuevo Juan de Grijalva is the first and only sustainable rural city that meets the objectives of the MDGs. 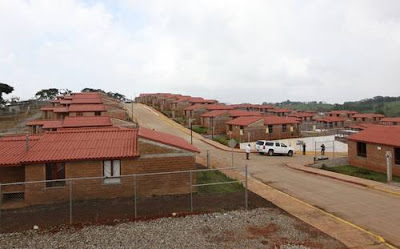 While such flattering discourses filling the mainstream Mexican press to the brim over the past year (i.e. this is a typical example) on how this project combats poverty and brings sustainable development clearly sound great, the reality on the ground is – unsurprisingly – something completely different. As pictured above, the ‘rural city’ is artificial, faceless and monotonous, with row upon row of 60 square metre houses each sitting on 300 square metres of land. The employment promised to residents has not manifested to the scale where people can actually support their families, and the small lots behind houses are insufficient to grow food, meaning that purchasing this basic commodity is now a new cost for families. Many people are thus forced to travel by bus daily to their land (sometimes up to 5 hours away), a journey creating yet another burden on their meager incomes, to continue their agricultural work. Although through such centralised living arrangements people can more easily access health care, telecommunication and energy services, residents interviewed recently by CIEPAC (see below) in Juan del Grijalva note that the clinic is in very high demand and very little medication is available, and that electricity bills are extremely expensive, to the point where many small shop owners are becoming severely indebted. It appears that most families are staying for the moment because their children have access to education. 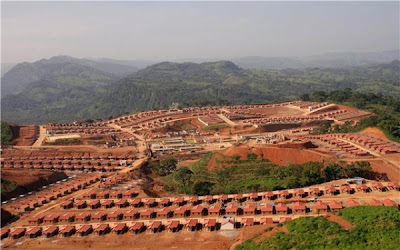 In the meantime, Mexican President Calderón has plans to create at least 25 other ‘sustainable’ rural cities. Time will tell what further critiques and issues will arise from those clearly unsustainable existing sites (from social, ecological and economic perspectives, for now including Nuevo Juan de Grijalva and Santiago el Pinar) and those to come in the future.