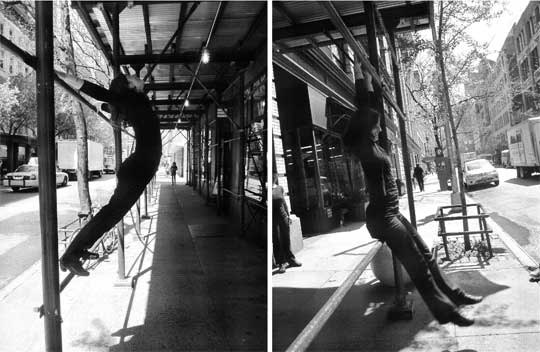 Can urban intervention create opportunities for fitness in public spaces? Can well-placed "extensions" to existing urban structures, such as scaffolding or bike racks, turn a city into a free gym? Par Corps Lab — led by curator Shonquis Moreno, Robyne Kassen and Sarah Gluck (Urban Movement), and Tucker Viemeister (Rockwell Lab) — investigates these possibilities through a series of physical experiments in the city of New York. Observations of passersby, as well as the skill sets of team members (Gluck is also a yoga instructor), led to the concept of cities as exercise machines. As a preliminary research phase, the documented experiments are presented as a film installation designed by Pure+Applied, which will open this evening at the Center for Architecture's Helfand Gallery.

Par Corps Lab is one of ten teams participating in ExpoTENtial, an ongoing platform for collaboration and festival based in New York City. The festival opened earlier this month with Hug a Worm Lab and Urban Alchemy Lab, each addressing different sustainability-related challenges via interdisciplinary approaches to design practice. The results aim to foster conversation and engagement among urban communities around ideas for a slower, smarter, livelier, and healthier experience in cities. 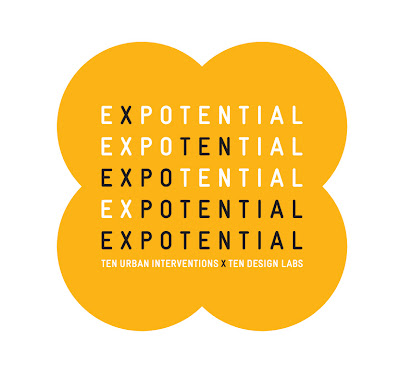 Program director and curator Laetitia Wolff (futureflair) is an active mediator and synthesizer of design and cultural practice. In 2005, her project ValueMeal: Design and (over)Eating, following its second showing at the AIA Center for Architecture, triggered a dialogue with the Department of Health and became a direct inspiration for the Fit City Conference. ExpoTENtial is hosting a fundraiser through Kickstarter to help fund the rest of the labs and continue the conversations on those that have already started. The fundraiser will end on May 31st.