Beyond the Landfill: Waste Pickers Around the World

by Julia Waterhous and Dylan Crary

Before leaving the United States, we never thought much about waste. Yes, trash collection is an essential service for the public health and livability of every city in the world. And yes, recycling is becoming increasingly important as ever-growing landfills and constant resource extraction challenge the resilience of our environment. So we recycled and composted, but saw waste as mainly an environmental issue. 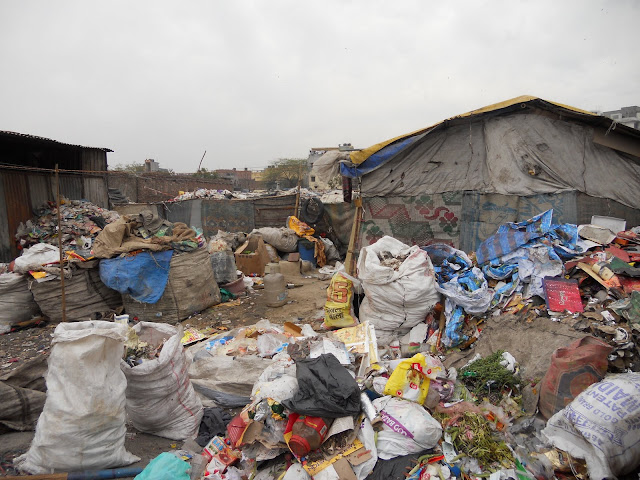 When we went abroad, we realized that waste was not only a public service but also a source of livelihood in many cities. Beyond the landfill are people for whom waste management and recycling are the means for day-to-day survival.

In Delhi, writer, environmentalist, and activist Ravi Agarwal explained that waste pickers, beyond earning their own small income, added value to the incomes of waste producers and significantly reduce city expenditure. They offered cheap (often free) and thorough collection, meticulously sorting recyclables that support the materials market and greatly reducing waste that ends up in overfilled landfills.

Despite this, the Municipal Corporation of Delhi, the municipal body responsible for the majority of its public services, views waste pickers as a nuisance. Many are undocumented migrants, and their work is considered illegal because landfills are owned by the municipality. The recyclers are under constant surveillance by both patrolling and plain-clothes police officers who threaten them from organizing into a network to fight for their rights, even sometimes burning down their homes. They live in makeshift houses made out of salvaged materials, with little access to clean water and electricity, and are subject to constant raids and clearances. They have no vote, and no voice.

Along with the other participants in our study abroad program, we piled onto a bus that took us to the outskirts of the city, a literal wasteland. On a plot of land strewn with blankets, tin, wood, food scraps, and mountains of plastic bags, we met the waste pickers. 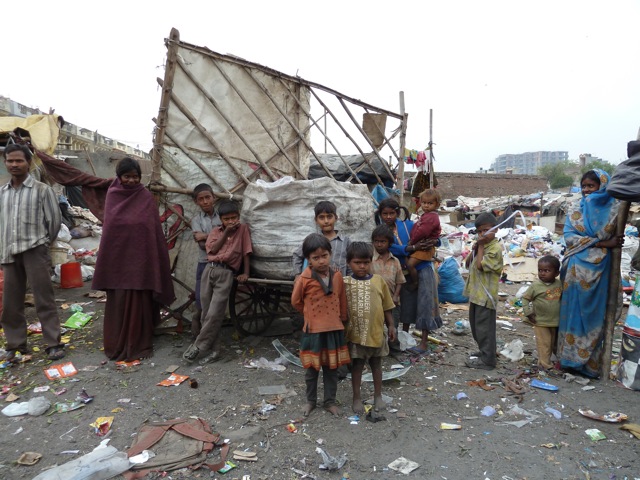 To make a living, these children pull recyclables from landfills in Delhi. Their bodies are often crushed by landslides of falling debris.

A group of young men lined up to watch us as we stepped off the bus, their faces expressionless. They led us down a narrow trail that zig-zagged past crushed takeout boxes with leftover daal and palak paneer spilling out. Silent children perched in a large tree, watching us. We passed a half-circle of old blankets hanging from wooden poles, from which more people emerged, curious and impassive. We made it to the only space free of debris, where a circle of chairs was set up on a large square of linoleum. 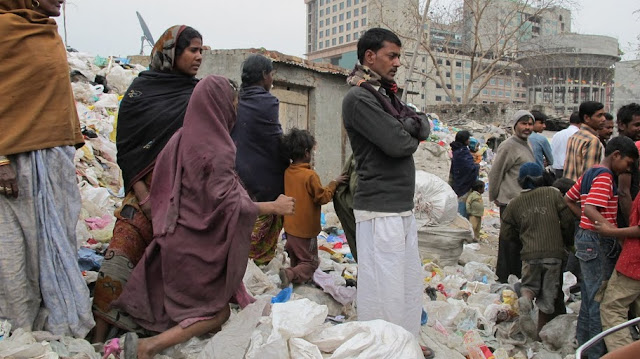 The waste pickers stand knee-deep in plastic bags, one of the items that they cannot salvage for sale because they are not recyclable.

We had hardly been there five minutes when our professor raised her hands to silence our questions. She came slowly around the circle, telling clusters of us in a low voice that we had to leave. There were plain-clothes police officers in the crowd who were watching the waste pickers and listening to the information being shared, and there would certainly be reprisals later.

It was a tense but unfortunately unsurprising situation. The treatment of waste pickers is perpetuated by the widely held perception of them as "lesser" people. We noticed that even those who maintain a positive relationship with the pickers exude such perceptions. Ms. Chaudhary, Vice President of the Defense Colony Welfare Association in Delhi, explained the benefits of the colony’s new compost program, which consists of hiring waste pickers (who are given uniforms and gloves) and teaching them to manage the compost pits — a "green" and noble endeavor. 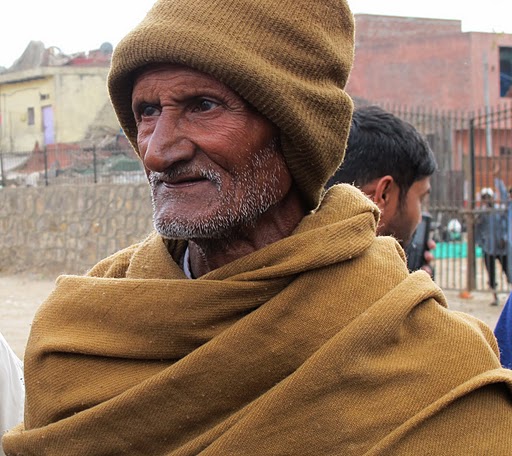 Throwing something away does not mean it disappears. Waste affects people.

Chaudhary explained that before the program, “the rag pickers were mentally and materially impoverished and incapable of healthy life. By teaching them this new skill they have been saved.” She spelled out how having the pickers design the compost area without guidelines (only a few critiques from her) had “taught them how to think for themselves.” She noted that “hopefully they will carry [this ‘new’ concept of thinking for themselves] on to their children.”

This picture is not confined to Delhi. In Dakar and Buenos Aires, we saw that waste pickers are also marginalized, both politically and socially. 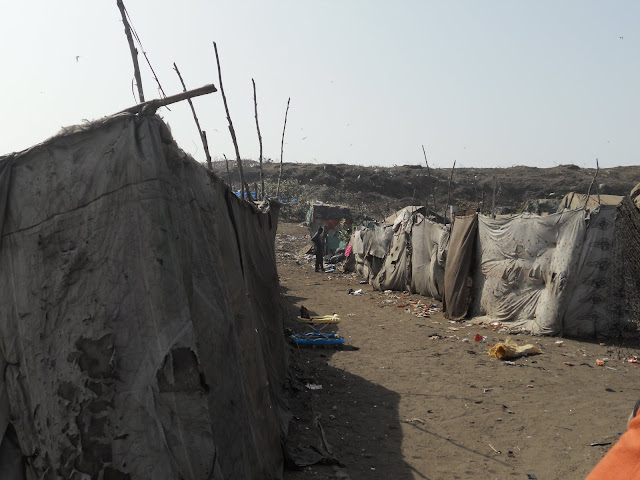 Waste pickers at the landfill in Dakar set up a rest area, including a restaurant. The makeshift tents are a mark of their integration into the formal waste collection system, as opposed to Delhi waste pickers who have to pay off city guards for access to landfills.

In Dakar, the waste pickers' role is more formal. They are recognized in legislation by the city government, and their livelihoods will be protected even as the government plans to move the landfill to a new location and revise the waste management system.

Yet, when we visited waste pickers at the Dakar landfill, we saw people using their bare hands to dig through piles of refuse covered with the white powder of hazardous chemicals. Thick black smoke from spontaneous methane fires cloaked them, causing us to choke and cough, but they kept working through these "normal" conditions. 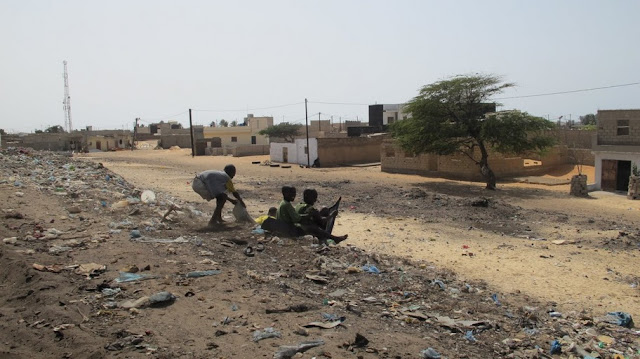 Children at the Dakar landfill slide down a pile of waste using aluminum siding as a makeshift sled.

In Buenos Aires, following Argentina’s devastating economic crash at the turn of the millennium, thousands of desperate and unemployed porteños took to collecting and selling recyclables. The cartoneros (a somewhat pejorative term used for pickers) became a common sight in neighborhoods across the City of Buenos Aires, typically taking trains or buses in from outer districts in the early morning or late at night to collect whatever materials they could.

They were first persecuted by a society that considered them as dirty, dangerous, drug peddlers, and so forth. When Julia asked her host mom what she thought of the cartoneros around the city, she responded frankly: “I don’t like seeing them on the streets. Most of them have a vendetta against society, and I’m afraid they’ll hurt my daughter.”

An important moment came when the city passed the Zero Waste law, which set benchmarks towards eliminating all unnecessary intake in the city’s landfills that were (and continue to be) rapidly reaching capacity. The city realized that recycling by the pickers was crucial to reducing landfill intake and decided to legitimize the profession of the "recuperadores urbanos" by contracting picker cooperatives to cover parts of the city. 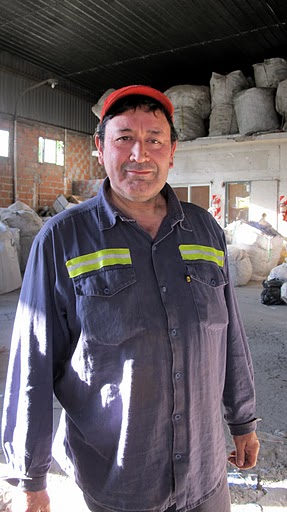 After losing his job during the economic crisis in 2001, Juan’s only hope of livelihood was becoming a recuperador urbano. Now he has a uniform and cart issued by the government to collect recyclables from the street.

The waste pickers are given uniforms, gloves, identification cards, and carts. Despite, this they are largely ignored, scorned, and even feared by the public, which keeps them in a position of vulnerability. The worker cooperatives have started to help with social integration by setting up community centers that double as meeting places for the waste pickers.

The governments in Buenos Aires and Dakar are slowly beginning to recognize the contribution of waste pickers, but more has to be done to further safety and social equity. The government in Delhi has so far ignored the work of the waste pickers, preferring to criminalize them and, as of recently, make room for corporations to enter the door-to-door collection industry, displacing pickers. In a capitalist system where the economic value of people is measured by their wealth, waste pickers simply don’t count.

After leaving the waste pickers in Delhi, many of us were left with pervasive feelings of guilt. How could we have so much when they have so little? Our professor firmly told us that feeling guilty was useless, because it was not about us. Guilt is a selfish feeling, she told us, one that stems from a subconscious idea that you have something more, or are someone better, than someone else.

From this feeling, people often set out with an agenda to “help” others by giving them what they have. This top-down aid is elitist and often unhelpful. Instead of approaching a person or situation with a pre-made solution, we should approach them humbly, seeking to understand and learn from them what they need. Instead of feeling guilty, our professor told us to ask ourselves how we could change how we deal with waste locally. In an interconnected world, local waste management can have far-reaching effects.

Back in the United States, I noticed that Seattle had started re-labeling trash cans as “landfill.” Putting a name on the destination instead of the product makes people reconsider where they put their disposables.

Waste collection is currently one of the most dangerous jobs in the United States. How do we react to people collecting disposables? Becoming more mindful of our waste and those who deal with it is a first step to reducing our global impact — not only on the environment, but on people.