In mid-May, the outrage simmering below the surface of Spain’s economic and political situation came to a boil, as tens of thousands of people marched for "Real Democracy Now" and took over plazas in more than 60 cities across the country. A remarkable degree of organization was evident in these citizen-occupied squares, from small- to mid-sized cities like Palma de Mallorca to Madrid and Barcelona, where operations were effectively choreographed on a much larger scale. 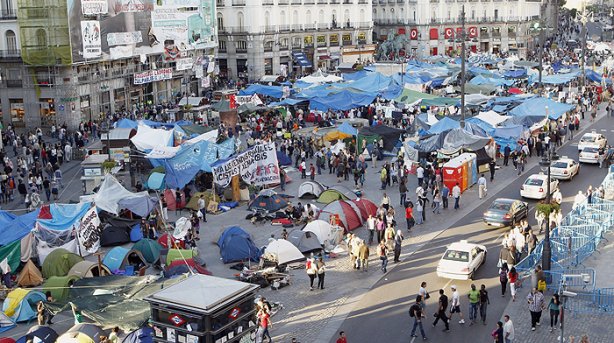 Indignados in Madrid set up a highly organized takeover of Puerta del Sol.

The plaza takeover energy entered a temporary lull after a few weeks, but it snapped back to life when the police attempted a violent eviction of Plaça Cataluyna in Barcelona at the end of May. Scenes of people sitting peacefully, arms in the air, as the police dealt blows with batons right and left re-energized the outrage, and there were solidarity actions across the country to support the Barcelona camp-out and others against evictions.

Police evicting the indignados in Plaça Catalunya in Barcelona.

In late June and early July, popular assemblies in most cities across Spain agreed to disband their central plaza camp-outs and decentralize activities into neighborhoods across the city, focusing on building context-specific, local action plans. This happened more smoothly in some cities than others; in Palma de Mallorca, for example, many people with no place to live stayed camped out in Plaça d’Islandia, resulting in a police eviction and brutal repression during a protest the following day. 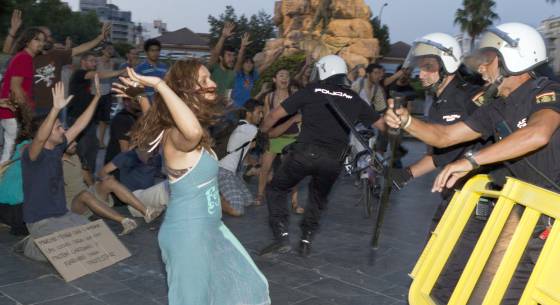 Confrontation with the police during a protest against the plaza eviction in Palma de Mallorca.

As charges were laid against the police in Palma, the next phase of the movement began. Now over half a dozen neighborhood assemblies take place across the city. Designated representatives attend an inter-neighborhood popular assembly once a week to share and coordinate activities. The Acampada Palma (Palma Camp Out) website has information on neighborhood and issue-based meetings — including those focused on the free university, communication, anti-eviction, retirees, education, and indignados, to name a few — with agendas and meeting minutes posted online.

In August, most 15-M Movement participants are taking a break after two months of intense work. Dozens of actions are being planned locally, such as a campaign to re-appropriate Local Agenda 21 processes across Mallorca as channels for citizen participation in governance. President José Luis Zapatero has called for national elections on November 20, and it is certain that things will heat up again in the coming months.

At times it seems that the only actions of the 15-M Movement are protests and endless assemblies that take place in cities across Spain each week. But in the past three months the movement has made some important achievements. For example, evictions have slowed and dozens have stopped, as activists have pressured a few banks to change their policies in favor of those unable to make their mortgage payments. The 15-M’s call for transparency has pushed the current government to complete a Transparency Law (Spain is the biggest country in the EU without one), and there have been a flood of transparency-related initiatives in Parliament and local administrations. Perhaps the most important outcome of the 15-M Movement is that tens of thousands of people have become politicized, as the street has turned into a space of collective learning. 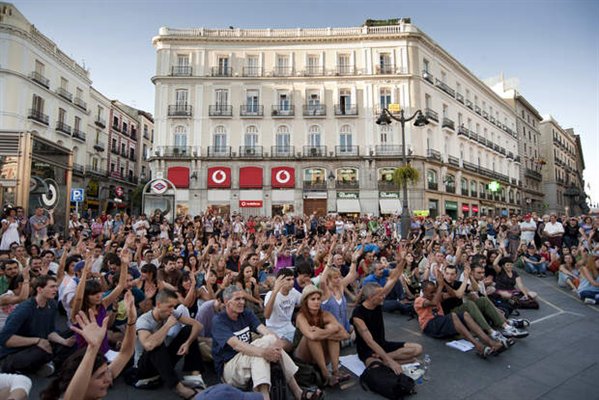 An assembly in Madrid's Puerta del Sol in early August.

The 15-M Movement, despite the many challenges it faces in working through a horizontal decision-making process with no clearly defined leadership, is making remarkable headway in cities across Spain. Perhaps its greatest achievement to date, citing a recent paper by Swyngendouw, is well summarized by the following:

While the long-term impact remains to be seen, within three short months the indignados have certainly questioned and begun to shift the boundaries of what is considered possible within Spain's existing political and economic system.