When Transportation Becomes a Tourist Attraction

When a country spends 10 billion yuan ($1.33 billion) on a new train line, one would expect people to use it. That is not the case with China’s Shanghai Maglev Train, which is still mostly a tourist attraction after being in service for seven years. It is less a transportation system than a way to boost China’s international image. 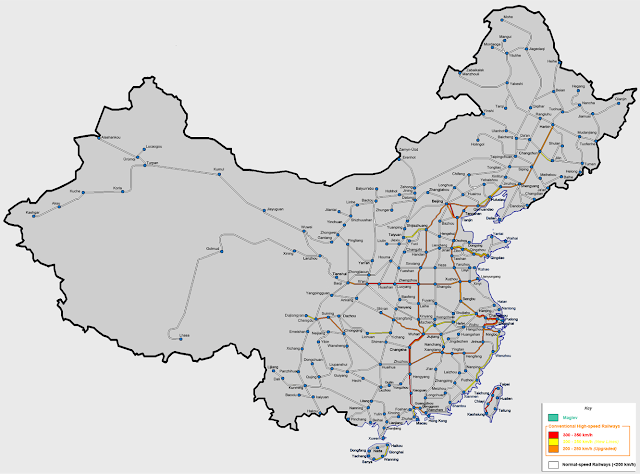 The rail network between China and Taiwan, with high speed rail lines colored according to speed.

Currently, China is home to the longest high-speed rail line network in the world: a staggering 9,676 kilometers of track. To understand why the Maglev train system has become a tourist attraction rather than a useful mode of transportation, a little background on the Chinese train system is required. There are three main types of train in China: the regular train (火車), high-speed rail (高速铁路/高速鐵路) and the Shanghai Maglev Train (上海磁浮示范运营线/上海磁浮示範運營線).

According to my uncle, regular trains are “very cheap,” but they are “slow” and for “poor working people.” The high-speed rail, which goes about 200-350 kph, is the next step up. Most white-collar, working-class people, including him, use this as their main form of transportation, and it is the most popular mode of transport in China. The Maglev train, which operates at a top speed of 431 kph, is the fastest commercial train in the world but is also the least popular among regular commuters in China.

The first reason for its lack of use is coverage. Take for instance the Beijing-Shanghai High-Speed Railway, which has 24 stations on its line and covers 1,318 kilometers between Beijing and Shanghai. Most importantly, it connects two major economic zones in China: The Bohai Economic Rim (环渤海经济圈) and the Yangtze River Delta (长江三角洲). Compare that to the Maglev train system, which has only two stations on its line and covers only 30.5 kilometers between Longyang Road (龙阳路) and Pudong International Airport (浦东国际机场) in Pudong, Shanghai. Worse yet, the terminus at Longyang Road is 20 minutes by subway from the city center. One could compare it to taking a bus and being forced off two stops too early.

The second factor is cost. While the first two, slower systems cost around 0.42-0.5 yuan per kilometer for the cheapest ticket, the Maglev will cost travelers 1.64 yuan per kilometer. If you want to go into the city, you have to switch to other train systems. For people that work five or six days a week, it makes very little sense to take the Maglev.

Most people in China rode the Maglev once when it opened for the hype but never again, even when flying into Pudong International Airport. It more time- and cost-effective to take a taxi into the city center than paying for both a Maglev and high-speed train ticket.

The Maglev is not economically viable, even with the 2010 World Expo in Shanghai, which brought an incredible number of tourists into China. Even Chinese travel websites point out its inherent flaws. In my opinion, the Maglev was never slated to be an economically viable or efficient mode of transportation but was rather created to boost China’s image to tourists. A quick Google search on the Maglev train produces articles about its speed and promotes it as a must-see attraction for people visiting China. It is an effective symbol of China’s newfound economic power, because no train of its caliber can be found anywhere else in the world. Perhaps China is truly trying to implement a faster railway system, but at this point, it is nothing more than a tourist attraction and a symbol of China's growing wealth.

Yolanta Siu is a Polis intern.

Credits: Diagram of rail network between China and Taiwan and Shanghai Maglev Route from Wikipedia.