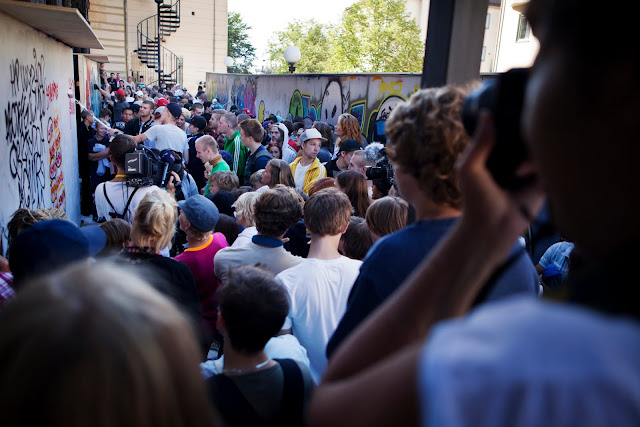 Last weekend Art of the Streets, an international street art convention, took place in Stockholm. The convention, organized by touring national theatre company Riksteatern, was given the green light to advertise on more than 300 of Stockholm's so-called cultural billboards. The posters were designed by some of Sweden's foremost graffiti artists, but after they were printed in mid-July, officials at the Traffic Office suddenly announced that they would not put up the ads.

The incident triggered a debate that has been going on in the Swedish capital during the last month. Stockholm is the last capital in Europe to maintain a zero tolerance policy against graffiti and vandalism according to Riksteatern. The graffiti policy, which dates from 2007, states that Stockholm will not support activities or events that don't clearly renounce tagging, illegal graffiti, or similar acts of vandalism.

It includes provisions that the city should not participate in activities or events that may arouse interest in graffiti and illegal graffiti. This means, among other things, that the walls of legal graffiti paintings found in many other cities are not allowed. The policy also prohibits all municipal branches from having graffiti designs in exhibitions, on-demand art, or include the aesthetics of graffiti in their operations in any other way. 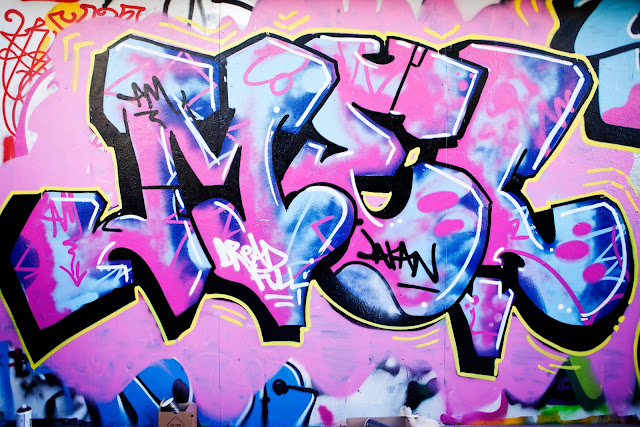 This is the second consecutive year that Art of the Streets was held in Stockholm. Swedish and international graffiti artists held workshops, discussed graffiti culture, and just like last year, Riksteatern had an open wall for those who wanted to paint – which already made city officials upset in 2010.

"It's really hard to say exactly, but our perception of the the public transport system SL, the police and the city's direction is that the damage increased sharply as a direct result of their arrangement," said Claes Thunberg, the manager of the anti-graffiti department at the City of Stockholm Traffic Office, recently told the daily newspaper Dagens Nyheter.

Finland's newly appointed culture minister Paavo Arhinmäki was one of those who participated in a debate on the Stockholm graffiti policy at the street art convention. He brought experiences from Helsinki, a city that had zero tolerance for all forms of street art for 10 years before politicians decided to scrap the policy in 2008.

"There will always be illegal graffiti, and I do not mean that we should accept it, but we need to think about which way is best to go. For my part, I'll rather give young people better opportunities to use their creativity in a positive way than to have zero tolerance for everything," he recently told Dagens Nyheter. 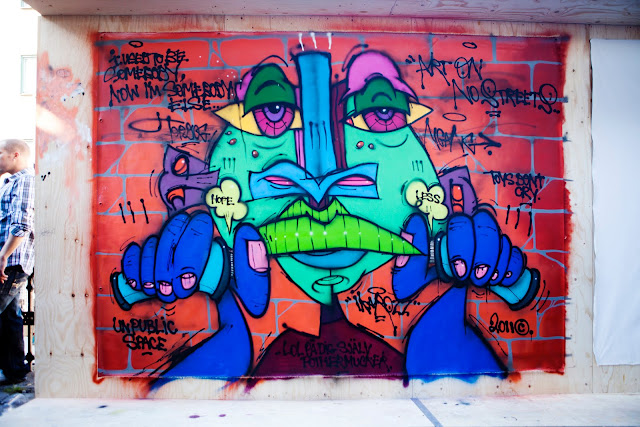 Riksteatern is one of the largest social movements in the performing arts in Sweden. Its mission includes being a pioneer in developing new forms of participation, which is why it has welcomed graffiti culture and made the issue of their right to exist in society to one of its priorities.

Although the advertising signs were banned – or perhaps because they were – Art of the Streets received a lot of attention and doubled its audience. This year, 5,900 people visited the convention, compared to 3,000 last year. In the coming two months, Art of the Streets will be on tour in Sweden. But the future of the graffiti policy remains in question.

Today, the weekly local newspaper Södermalmsnytt reported that the Stockholm police arrested "16 doodlers red handed" last weekend, all of whom had been visiting Art of the Streets. They were followed from the festival by security guards or police officers before being arrested.

Given the 5,900 visitors, 16 arrests may not seem like many. But the tone of the local conservative political spokesman interviewed in the newspaper reveals that graffiti art will be treated as vandalism as long as his party is in charge.