Several weeks ago, The New York Times reported on a recent surge in graffiti and debate over whether it "contributes to urban blight and economic decay." An official quoted in the article attributed the increase to youth boredom during summer vacation. Anti-graffiti campaigns like Graffiti Hurts treat street art as a form of juvenile delinquency. However, many graffiti artists are well into their thirties, with full-time jobs. The article also raised the question of whether the rise in graffiti stems from “increased alienation” in poor urban areas. Yet artists across the United States are being arrested outside their local neighborhoods. 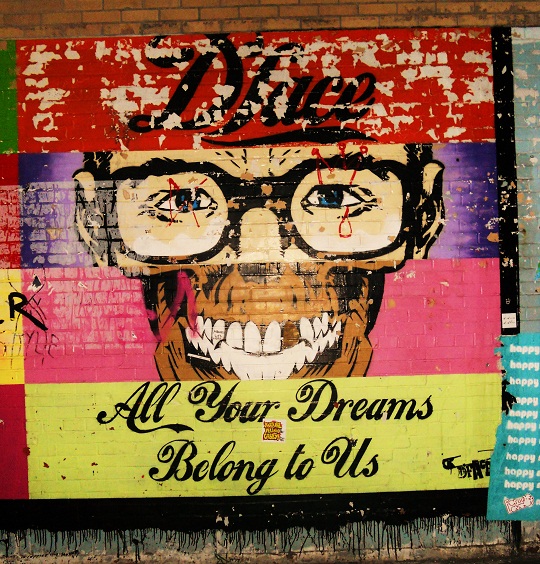 "All Your Dreams Belong to Us" by D’face, near the High Line, N.Y.

The proliferation of graffiti across landscapes — from downtowns to suburbs, from east to west, from one country to another — is due in part to an increase in mobility, thanks to the forces of technology and globalization. It is increasingly hard to pinpoint the original location of artists.

Websites like Bomit and The Wooster Collective make works accessible anywhere in the world. Bomit is a blog aimed at circulating the visual wealth of stickers by mass producing submissions from the sticker community. (Many artists use wheat paste print-outs, postal stickers, and generic “Hello My Name is” stickers as cheap alternatives to expensive spray cans.) The stickers are then distributed for display in public places across the globe. The Wooster Collective, which helped develop Bomit, started off showcasing street art in the Soho neighborhood of New York City before going international. 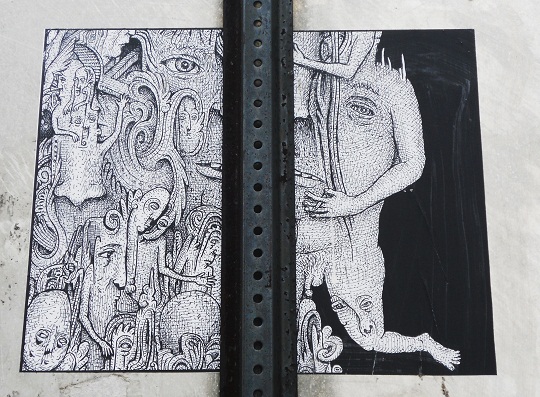 Although some artists work for simple visual pleasure, others use street art as a way to raise awareness about the human condition across neighborhood boundaries.

Bortusk Leer, a London street artist whose alias is an anagram of his real name. His style has been labeled outsider art or naïve art, and he found inspiration while serving as an art assistant in a special education classroom: “I just loved the way they worked. The freedom. I like that instant, child-like way of making things. I try to paint like a five-year-old. I think that’s the best way to describe it.” Bortusk pastes up newspaper articles and decorates them with child-like paintings of colorful monsters that look slightly demented. They appear along streets and bridges as invitations to smile. 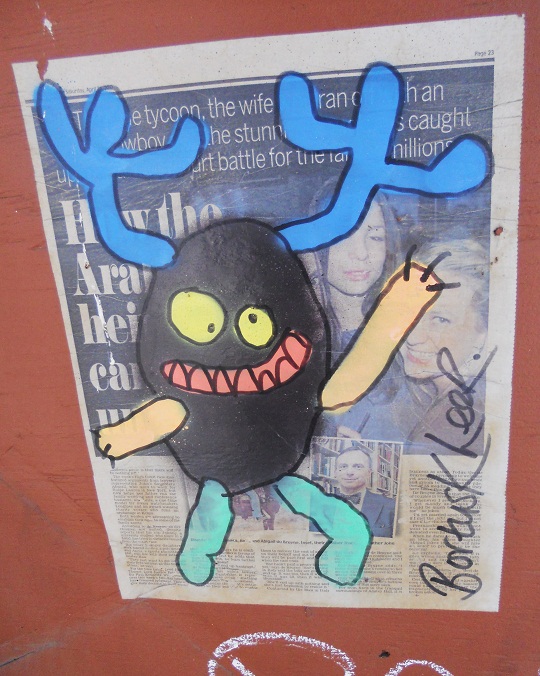 Stikman uses stickers, metal, plastic, and vinyl records in the shape of his moniker — a stickman. These can be found at various intersections in Washington, D.C., New York, and California. Stikman places his work along the ground in places with constant flows of pedestrians. In an article in The Washington Post, Stikman explains that his goal is “simply to cause those gazing down to pause and wonder.” 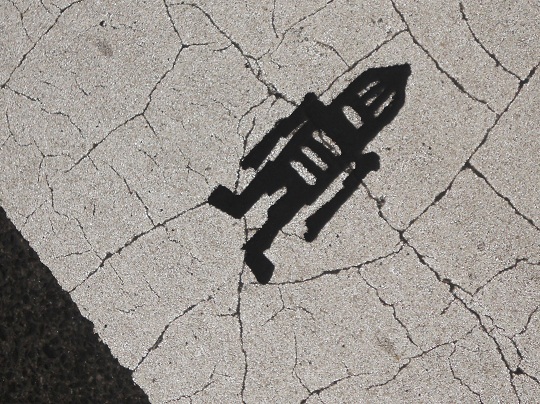 Stikman on a crosswalk, Washington, D.C. 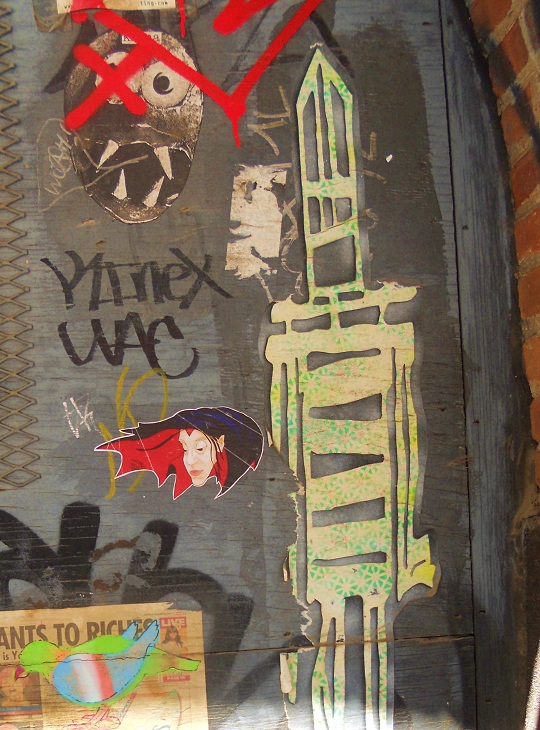 Stikman under a bridge, Brooklyn, N.Y.

Dimitri Drjuchin, better known as Dima, focuses on the human mind and its capacity to filter information into a perceived reality, which he then produces on canvases in galleries around the world. Dima was born in Moscow and raised in New York City. The shapes and colors in his pieces are very simple, but the message delivered is layered and hard to grasp in the first few glances. According to Dima, the inspiration for his work is a mixture of his Russian background, comic books, fine art, spirituality, and supernatural hidden forces. 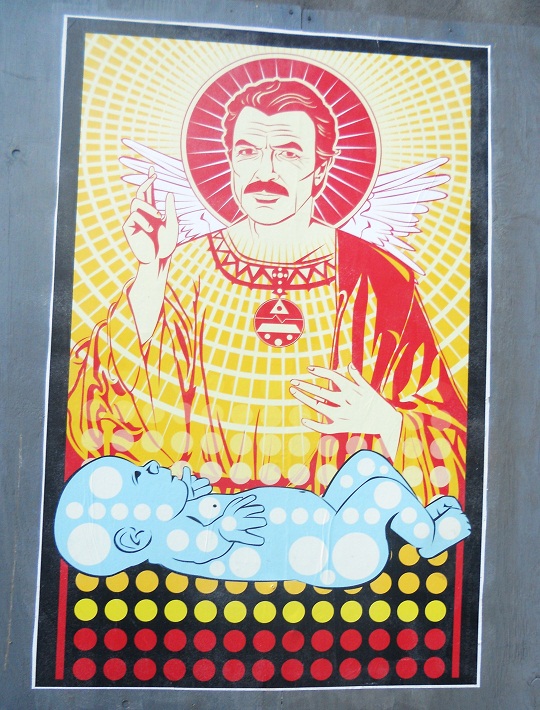 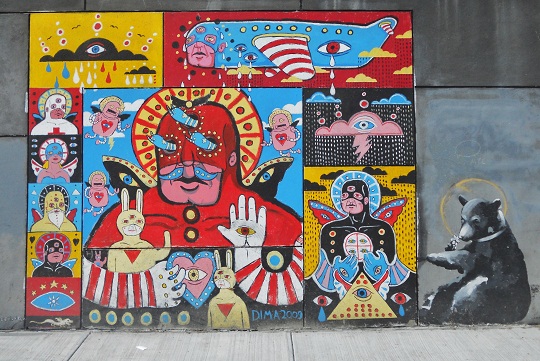 The creator of The Dude Company (i.e., The Dude) is from Lille, France, and finds inspiration for his stencils in hip-hop artists and urban scenes. His work has appeared in streets around the world, and recently as part of "The Great Outdoors" exhibit and the "Street Crush" street art show in New York City. The Dude works a full-time job and stencils on the side as a passion. 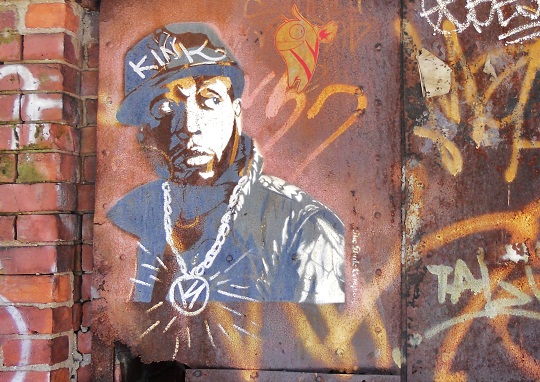 Portrait of Talib Kweli by The Dude Company, Brooklyn, N.Y. 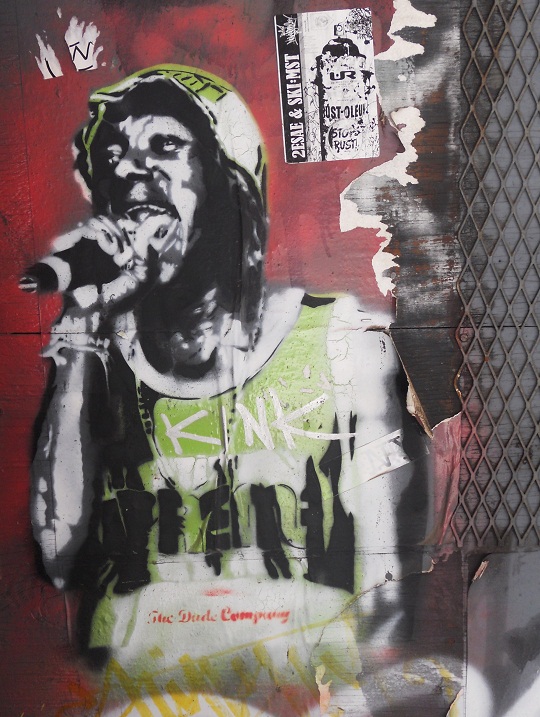 Portrait of Mos Def by The Dude Company, Brooklyn, N.Y. 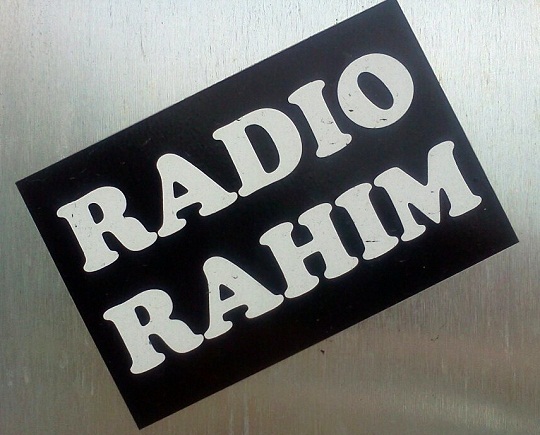 The National Capital Immigration Coalition also uses street art to create awareness and fight oppression. They put up wheat pastes of a tree in the shape of the United States, with roots in the shape of the seven continents. It has been spotted in Washington, D.C. and Georgia. The pastes were made into picket signs for the 2009 May Day Rally. 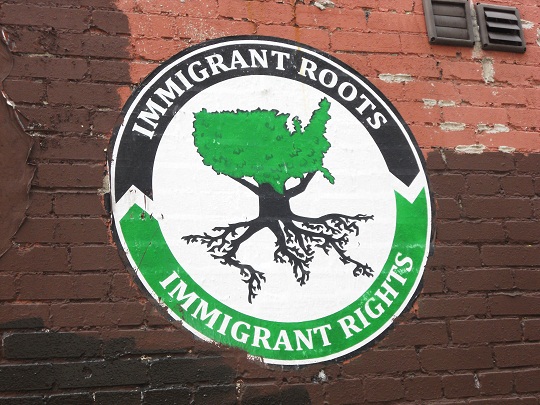 The proliferation of street art in the urban landscape is often met with hostility, disgust, and destruction. Urban treasures like the works above help break down misperceptions that it is the "other," from a faraway place and with violent tendencies, who resorts to street art. In fact, it is not the differences between us that are creating a surge in graffiti, but rather unifying images that spread like wildfire via network technologies. They are opening new channels for communication and empowerment around the world.