Walking to London from Heathrow Airport

Whenever we fly into a new city, we usually follow a similar pattern of discovery: take some kind of transit into the center of town, find our home base — a hotel, a friend’s house — and start to explore the city from there. Well-known tourist destinations and neighborhoods familiar from movies and guidebooks are first. As we feel more comfortable in our surroundings, we look farther outside the popular and accessible areas for new experiences. We learn a city, essentially, from the inside out.

A recent trip had me in London for four days, and I thought, what if I reversed that paradigm? What if I started from the outside and worked my way in? Since Heathrow is right at the edge of Greater London, it made perfect sense just to land, clear customs, and start walking.


You can also view London Walk on Google Maps.

I also thought, what if I did the reverse: took a city I knew extremely well, New York, and went from the inside out? I resolved to do a warm-up walk from Times Square to the airport, where I would catch my flight to London. It started out well. I took a picture with the Naked Cowboy and made my way up to Columbus Circle, the “Mile Zero” of New York, from which distances to the city are measured. From there, I headed across the 59th Street Bridge into Queens. 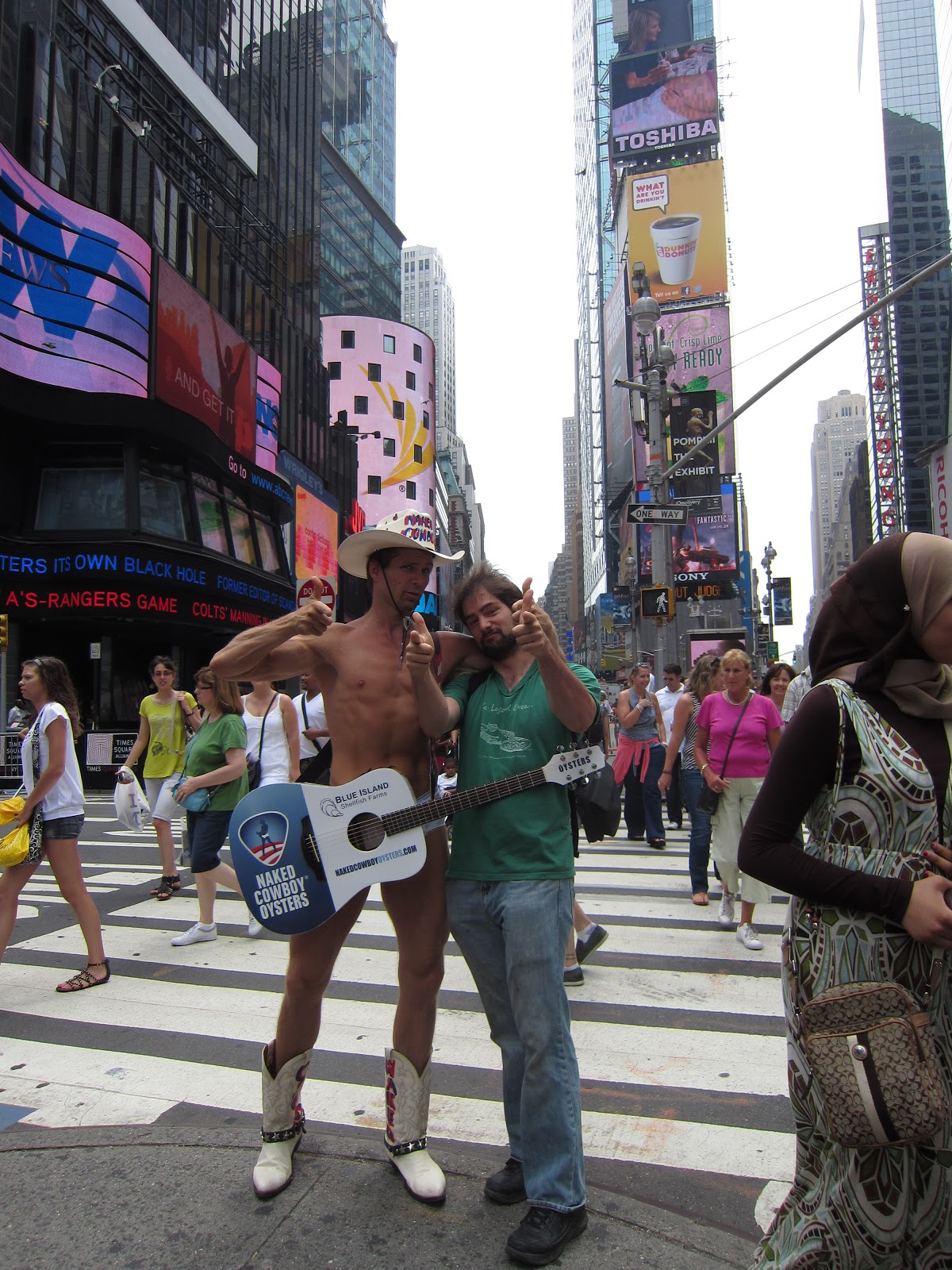 Unfortunately, my flight ended up being cancelled three hours before its scheduled departure, and my new flight was out of John F. Kennedy Airport. Since there was no way I could get there in time on foot, I hopped the subway, defeated. 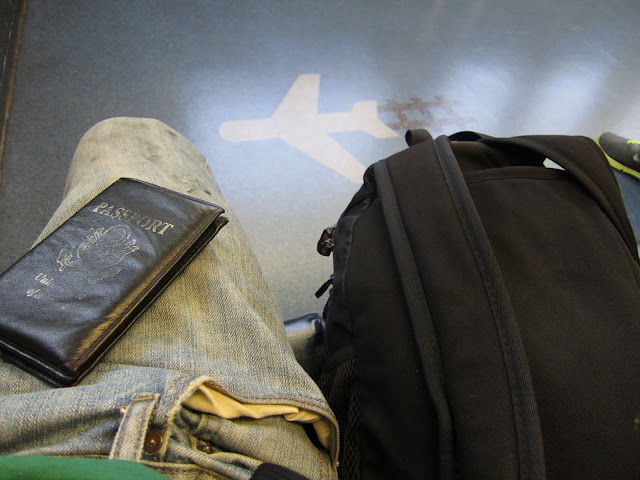 American Airlines owes me $7.25 for the Airtrain.

I landed in Heathrow the next morning. My initial fear that I wouldn’t be able to exit the airport on foot proved unfounded. I walked out the door of Terminal Four at about 9 a.m. and only had to navigate a few hundred feet along the sides of access roads before I found an actual bicycle and pedestrian path leading out of the airport grounds and onto the A30 dual carriageway to London. A biker whizzed by,  using not the bumpy path I was on, but zooming along in the middle of highway traffic.

After exiting, I saw that I was truly at the edge. Despite being within the borders of Greater London, there were actually small working farms — unlike the airports in Queens, New York, where the last working farm is now a museum. 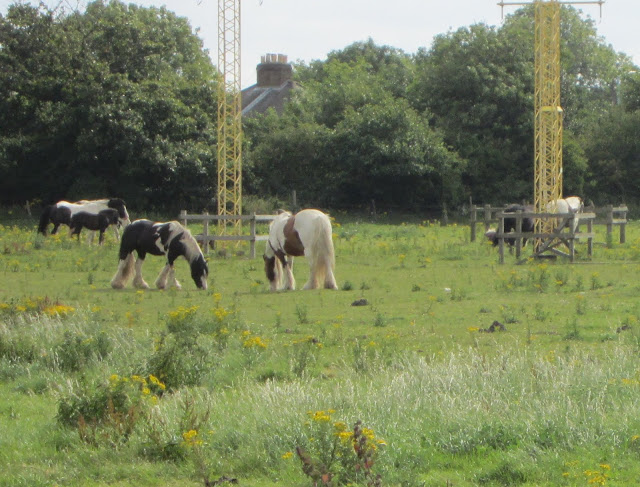 Strolling along the outside of the airport, I was a bit nervous. London is perhaps the most security-obsessed city in the world, with CCTV cameras everywhere. I half expected MI5 to pull up and question me about taking pictures. Then, after about 10 minutes, I came upon the plane spotters. At least half a dozen people with binoculars and telephoto cameras getting right up to the security fence. I mean, look at this. 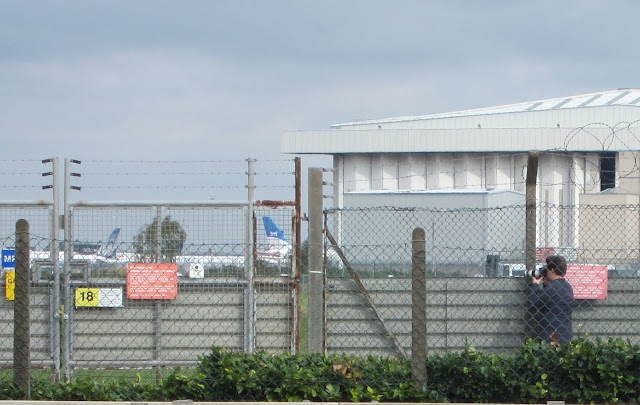 I was no longer nervous about pulling out my camera.

Finally, I made it past Heathrow and into the first real neighborhood — a middle-class, predominantly South Asian area that reminded me of some of the neighborhoods surrounding JFK. I also came across the first of many quintessentially British signs letting me know what all the CCTV cameras might be for. 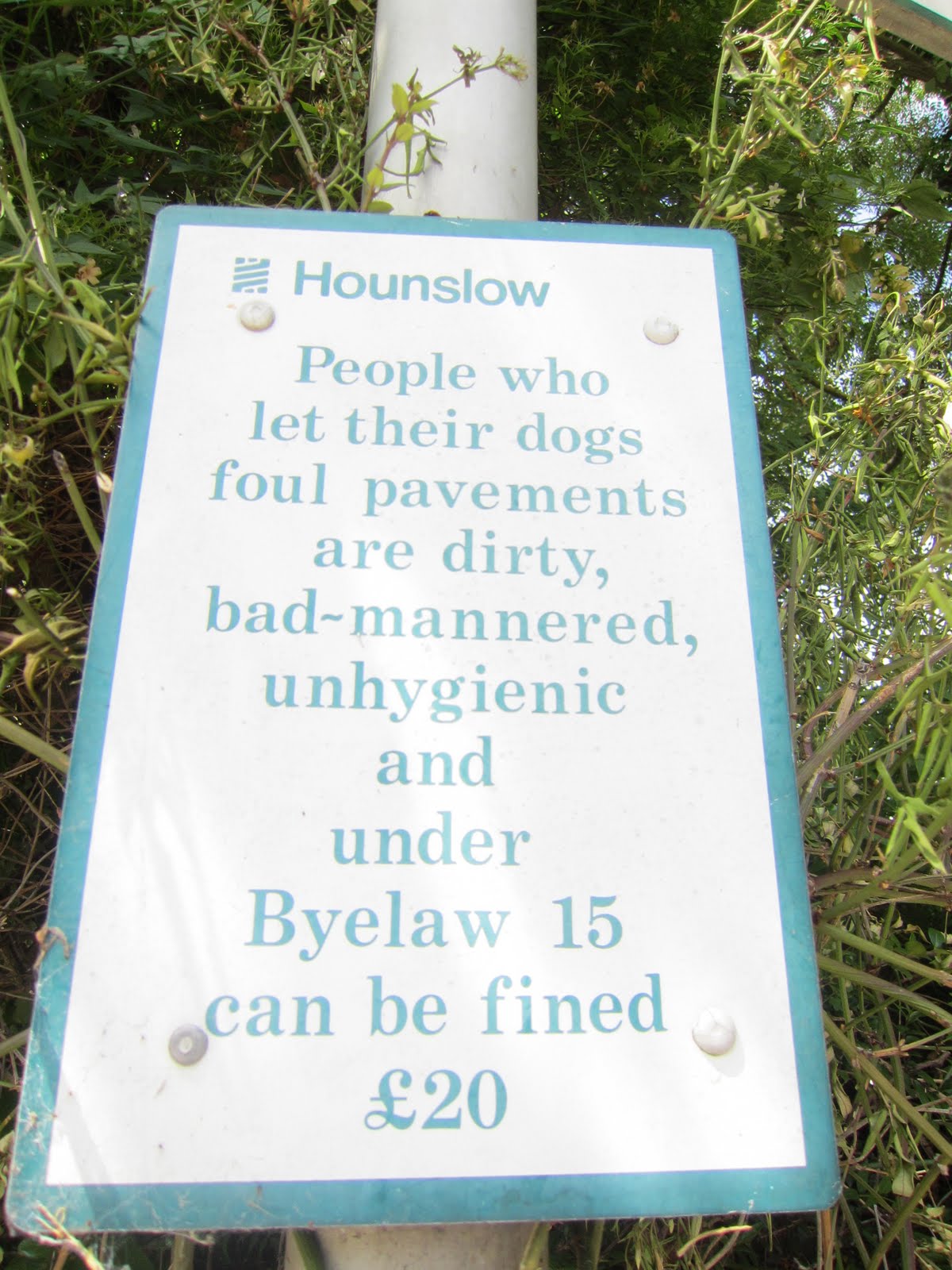 After a few miles of walking along a vibrant commercial strip, which became a pedestrian mall at one point, I came to an establishment flying a rainbow flag — contradicting the popularly held notion that LGBT friendly neighborhoods and establishments are always in central or "yuppie" areas of town. The same is true in New York: Had I made it out to LaGuardia on foot, the last neighborhood I traversed would have been Jackson Heights, home of the annual Queens Pride parade. 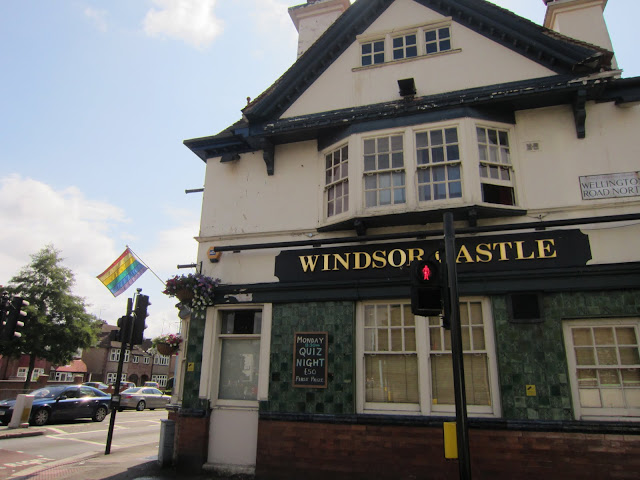 Three hours after I started walking, I found the first place that might reasonably be called a “destination”: a Victorian-era water pumping station that has been turned into the Kew Bridge Steam Museum. I didn’t have time for a full visit, but it’s on my agenda for next time — and something I don’t think I would have found if I hadn’t done this walk. Pay £20 for membership, and they’ll let you up the tower every once in a while. 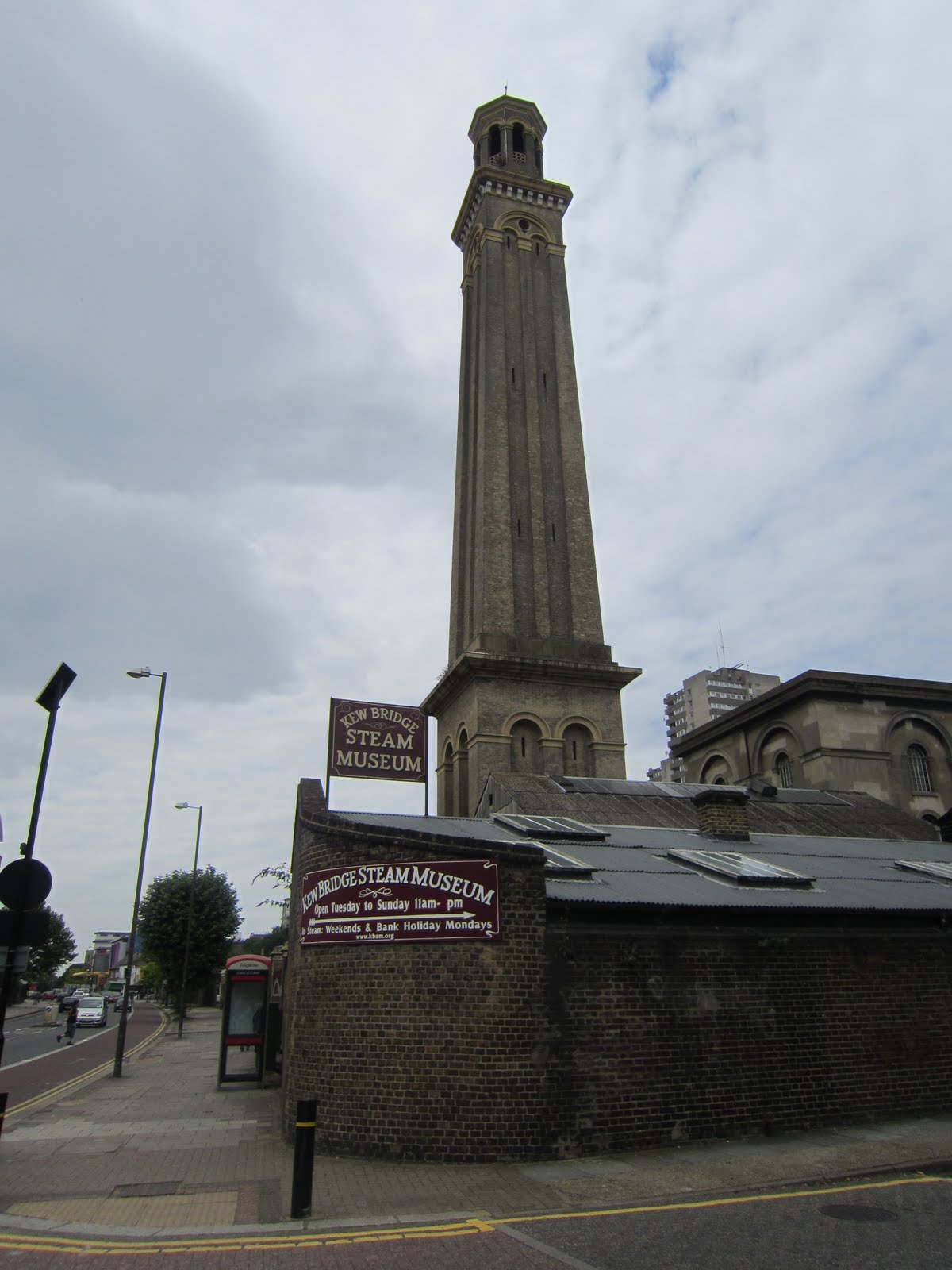 After leaving the museum, a short detour to see the Thames got me a bit lost and necessitated some backtracking, adding about a mile to my planned 18-mile route. I was not happy. By this time, the walk had become a slog. The commercial strips began to blend together, although I did notice the city gradually getting more crowded and posh as I got closer to the center. It wasn't too long before things lost their individuality and just became “London-ish.” Pubs that were quaint at the beginning of the walk started to seem generic. Scenes like this McDonald's, which had made me laugh out loud at the beginning of the trip, I barely noticed anymore. 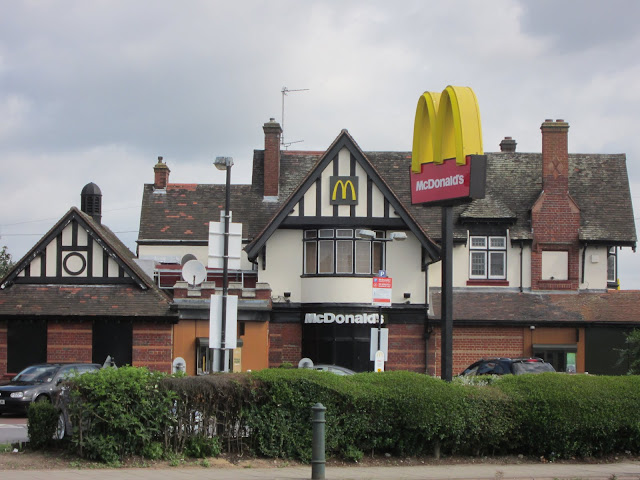 After just a few hours of walking, I was already officially jaded. I don’t blame the city though — so many of these journeys depend on our own state of mind. One hour of sleep on an airplane and a dodgy £4 English breakfast do not make for a pleasant stroll. I probably should have read the food hygiene rating for Pop Inn Café on Bath Road beforehand.

After about 14 miles, I was happily diverted from the commercial streetscape route I had been following when I reached Hyde Park. Soon after, I entered the congestion-pricing zone, the first official indication that I was now in the central part of the city. I started to see the London I recognized from postcards and previous visits – Buckingham Palace, Big Ben and Westminster off in the distance. The presence of double-decker tour buses and souvenir stands indicated I was now in the area where new arrivals generally start to explore a city. Soon afterward, I came to Charing Cross, generally considered London’s “Mile 0.” It had been less than 24 hours since I’d stood at New York’s “Mile 0” in Columbus Circle.

But Charing Cross was not my final destination — I still had about half an hour to go. After a walk up the Strand I came into the mile-square City of London, the oldest part of the metropolis and now the financial district. Upon rounding a corner, I spotted Tower 42 and the Swiss Re building (colloquially known as the Gherkin) standing above the skyline. 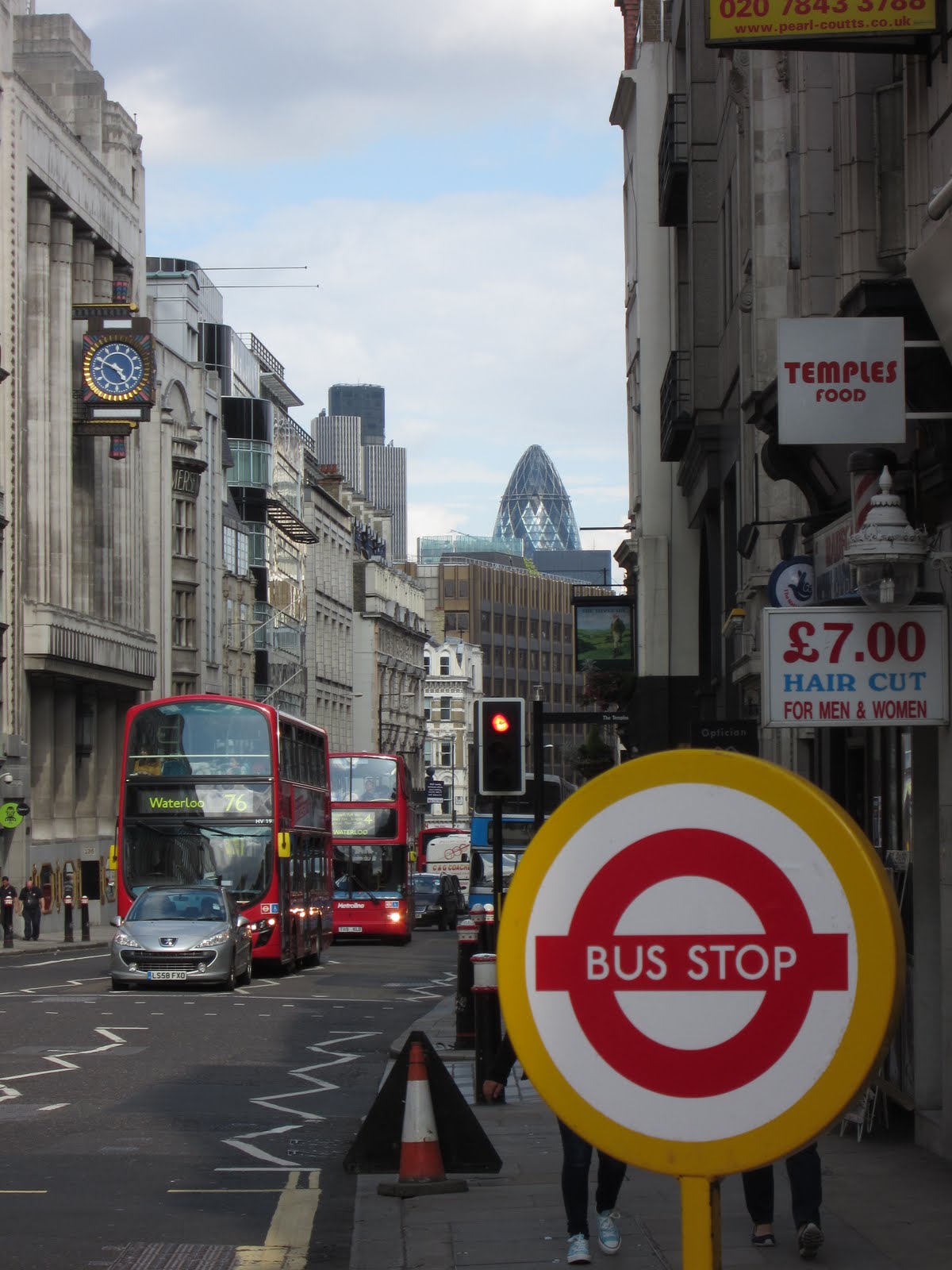 I had walked for almost 18 miles through London before spotting the first modern skyscrapers. London isn’t New York, Hong Kong, or Sao Paulo, with miles of high-rise buildings, but it still has its fair share. This was when it truly dawned on me how vast, residential, and predominantly low-rise the city really is. Staggering down Cannon Street just after 5 p.m., I found two friends waiting for me at my final destination, the London Stone — from which the ancient Romans were said to have measured all distances in Britannia. 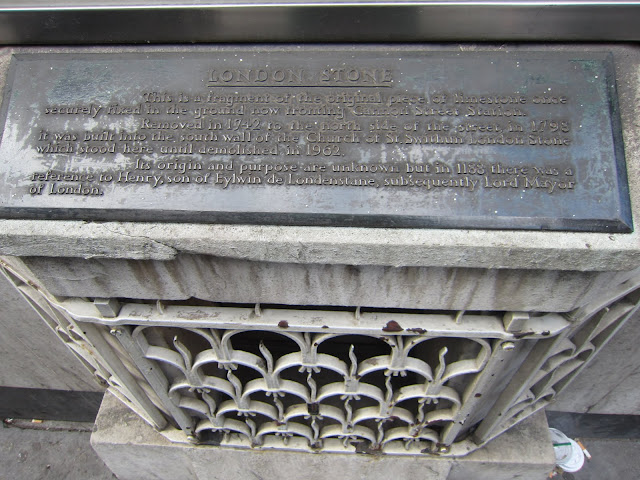 The London Stone turned out to be not only a landmark, but also the name of a nearby pub. After 19 miles and 8 hours of walking, a well-earned pint was certainly in order.

Moses Gates is a writer and urban planner living in New York. His first book, a memoir of urban exploration around the world, will be published by Penguin in the fall of 2012. His website is allcitynewyork.com.