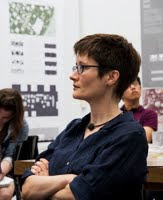 "Wake up. Architects, students and theorists ought to sit up for a moment and take a look around. Thanks to decades of intellectual effort — the acumen of certain architects, theorists, curators, schools, and publications such as Oppositions and Assemblage — we are surrounded by a remarkably fertile field of stuff. Our disciplinary ambitions — formal, technological, material, and intellectual — are poised to flourish. We would do well to shed at least a good part of our Obedience Complex. Lesson learned (really); let’s move on.

"We know now that the public realm is a heterogeneous field; let’s exploit the possibilities of our own architectural expertise. Rather than lose ourselves among its heterogeneity, we should aspire to change this field’s topography. In order to do so, architects must engage, lead, catalyze — act, rather than only react. Our expertise lies in defining forms, spaces, and materialities; we should not be afraid of the results and subjectivities (read: biases) that such definition implies.

"Unlike other disciplines in the liberal arts, architecture’s relationship to critical theory is not entirely concentric. Rather than bemoan this fact or conclude that theory has no bearing on architecture — two options that guarantee architecture’s intellectual suicide — architects interested in the progressive project have no choice but to take advantage of our ability to slip in and out of critical theory’s rule.

"After all, hasn’t critical theory itself defined the rule-zone as, at best, a fuzzy entity? New spatial orders for the public realm thrive in the oxygen of expectant uncertainty. Architecture’s ability to skip across, float on top of, or choose to obey critical theory’s frameworks gives us an exhilarating vantage point. Damn the torpedoes. Full steam ahead."

Sarah Whiting, from "Going Public," in The Architecture Reader: Essential Writings From Vitruvius to the Present, 2007