Echoes of the Washington Consensus in Delhi and Dakar 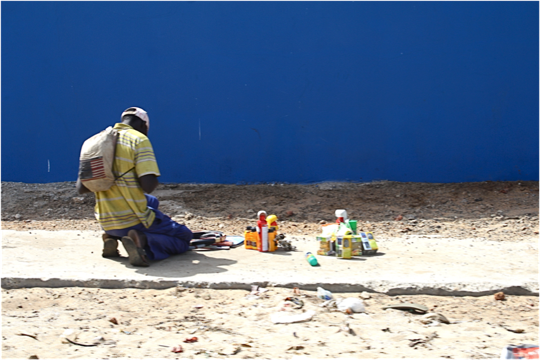 Street peddler along the planned route of the Diamniadio Toll Road in Dakar, Senegal.

In 1989, economist John Williamson published an article titled "What Washington Means by Policy Reform." In it, he listed ten basic policy tenets that he thought roughly outlined the reigning economic ideology of the day. In a nutshell, they were:

1. Fiscal deficits: Don’t do it.
2. Public expenditure reform: Services over subsidies.
3. Taxes: Let’s not get too progressive, now.
4. Interest Rates: Market-determined but always positive.
5. Exchange Rate: Competitive.
6. Trade Liberalization: Do it.
7. Foreign Direct Investment: Do it.
8. Privatization: Do it.
9. Deregulation: Do it.
10. Property Rights: Defend them.

He called it “The Washington Consensus.” In the 1990s, many countries adjusted their policies to reflect the ten rules, partially because of direct or indirect pressure from the United States, United Kingdom, and international economic organizations, but also in hopes that economic science had finally found an answer to recession, stagnation, and depression.

Since its early days, the Washington Consensus has been heavily criticized in academic circles, and some blame it for a series of financial crises and depressions in the developing world in the 1990s and 2000s.  The real danger of the Washington Consensus was never in the tenets themselves, but in their application. These were probably good options at a certain time, in a certain place. They only turned disastrous when policymakers in "developing" countries and advisers from "developed" countries pushed for their implementation in the wrong situations.

Unfortunately, Williamson’s original points still influence the policies of many nations based on the power of their ideological appeal. Two of the most popular tenets today are privatization and foreign direct investment, and they are the forces behind two new toll road projects on the outskirts of Delhi, India and Dakar, Senegal. 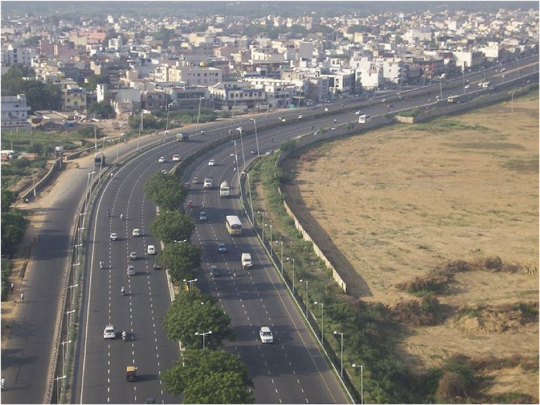 In 2008, a public-private partnership (PPP) between the National Highways Authority of India and a joint venture of two prominent Indian engineering firms began to renovate the section of National Highway 8 connecting Delhi proper with Gurgaon, a satellite city that hosts the highest concentration of multinational corporations in India. The PPP was primarily meant to “capitalize on private sector efficiency” and ease congestion created by commuters headed towards Gurgaon’s office parks.

In some ways, the partnership succeeded. According to several Gurgaon residents, congestion eased considerably after the expressway was completed. The “fasters” at the Gurgaon toll plaza can clear cars more quickly than any other collectors I have ever seen. High traffic flows have also turned a profit for the private partner, Gurgaon Super Connectivity Ltd., although so far only two years of the PPP’s 20-year contract have elapsed. 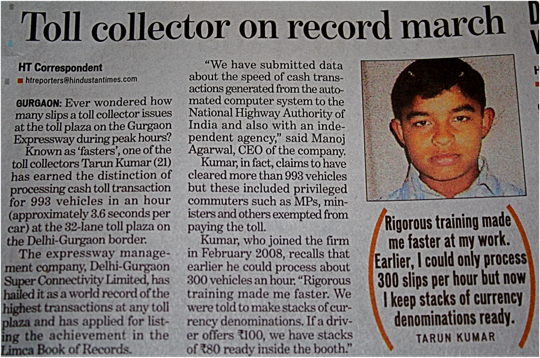 Tarun Kumar puts a car through the Delhi-Gurgaon toll plaza every 3.6 seconds. 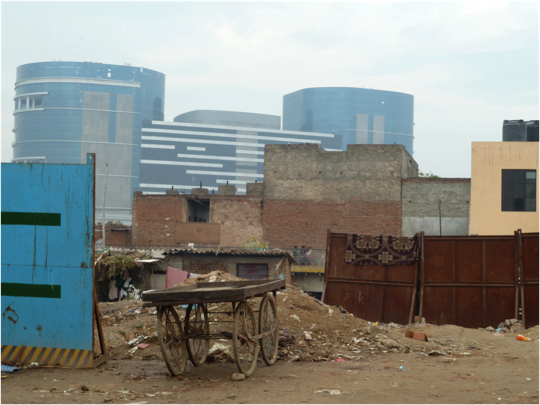 Urban village in Gurgaon, with multinational office buildings in the distance.

However, congestion returned as more commuters chose to take private cars instead of the private buses chartered by IT companies to ferry employees to work. More troubling is the fact that the Delhi-Gurgaon Expressway did nearly nothing to address the serious transportation problems faced by Delhi’s poor — it serves private cars and chartered buses, but not bicycles, auto-rickshaws or public buses. Without access to affordable transportation, many of the poor in Delhi choose to live in illegal settlements near commercial centers or next to construction sites. Half-built on public dollars, the expressway fails as public transportation. 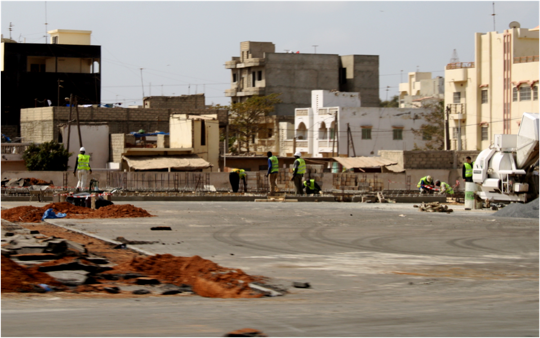 Construction workers along the planned route of the Diamniadio toll road. Dakar's characteristic half-built houses stand in the background.

If Senegalese president Abdoulaye Wade cared as much about reliable electricity as he does about new road infrastructure, he might have been able to slip in the election reform proposal that threatened to turn his presidency into a dynasty. Protesters burned his capital for being literally left in the dark, but his proposal for a new, multi-billion dollar toll road may end up causing just as much harm.

When he came to power in 2001, Wade created the Agencie de Promotion de Investissment and Grands Travaux (APIX) to promote foreign direct investment, Washington Consensus Tenet #7. He began a series of large projects to upgrade road infrastructure, making Dakar more navigable and appealing to foreign firms. His most ambitious project yet, the Dakar-Diamniadio Toll Highway, aims to ease congestion on the only major road leading out of Dakar and simultaneously connect a new, larger international airport with a planned “international business center” on the site of the existing airport.

The Diamniadio Toll Road will attract foreign direct investment only at the expense of increased foreign debt. Unlike the Gurgaon project, which was funded by India’s broad tax base and growing reserves of private capital, more than 60 percent of the toll road will be funded through loans from international banks, and the private partner fronting the remaining 40 percent is the French multinational Effiage, which will — if the PPP is successful — repatriate more proceeds from the toll than it invested in the infrastructure. Wade has proposed similar strategies to repair highways throughout Senegal.

The planned route of the Diamniadio Toll Road traverses two of the most densely populated and impoverished districts in the city, Pikine and Guediawaye, and provisions for relocation of residents have increased the cost of the project from 20 billion CFA ($40 million) to 200 billion ($400 million) today. Even so, a placation payment and a plot of land on the mainland will not likely satisfy the evicted dwellers of Pikine, who choose to live in poorly serviced and sometimes sinking suburbs because they need access to economic opportunities in the city.

Further, the high toll is likely to exclude the car-rapides and the Ndiaye Ndiayes, informal “transports communs” that carry at least 60 percent of all city travelers. Wade’s transportation policy has generally ignored these illegal and unregistered vehicles that have become a cherished symbol of the city. 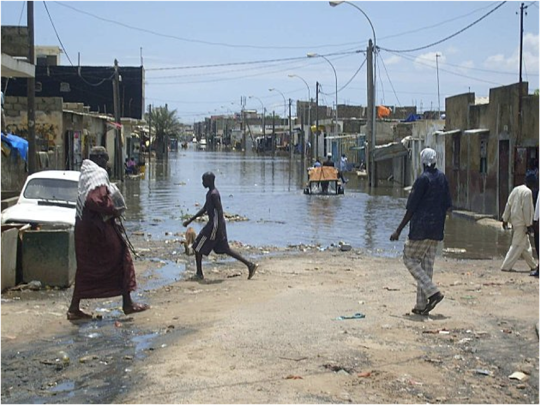 Permanent flooding in Media Gounass in Guediawaye, Dakar. Many residents have chosen to stay despite sinking homes and risk of malaria and cholera.

Neither toll road project is entirely misguided. Both address major problems of congestion in their respective cities, and both have convinced multinationals to move in. However, neither project comprehensively addresses city needs, as good public transportation policy should. The National Highways Authority of India and APIX frame their projects in language uncannily similar to the language that John Williamson used over 20 years ago to explain the need for privatization and foreign direct investment, suggesting that the impetus for each project was driven as much by a desire to chase an ideological ideal as it was to build a better city.