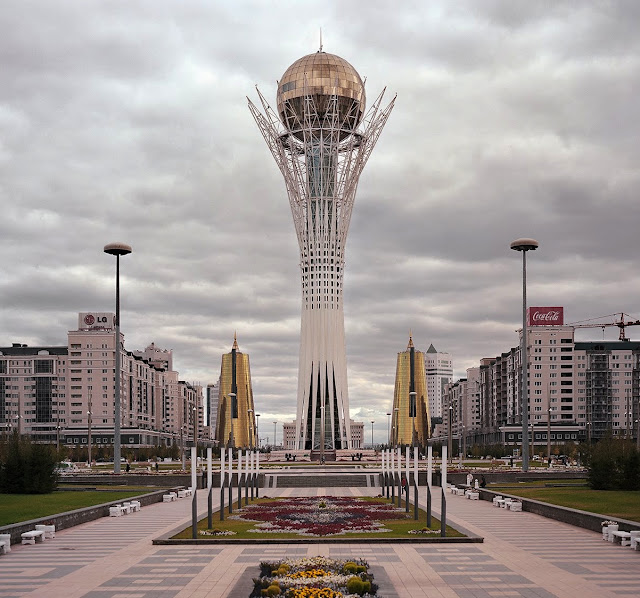 John Lancaster is a veteran foreign correspondent and magazine journalist with deep experience in South Asia and the Middle East. In June 2011, he spent a month in Astana, Kazakhstan, with a photographer, Gerd Ludwig, to learn about and report on the city — “this capital in a box that had sort of appeared from nowhere on the steppes,” as he described it.

Astana was designated as the capital of Kazakhstan in 1997, when President Nursultan Nazarbayev relocated the capital from Almaty, 600 kilometers to the south. Over the last 15 years, Nazarbayev and his government have invested huge sums of money, partly funded by oil wealth, to build up a large, flashy city. The population has more than doubled from 300,000 in 1997 to 700,000 today. The city is dominated by buildings “that look like nothing else,” as Lancaster describes them in "Tomorrowland," which appeared in the February issue of the National Geographic magazine.

The rapid development of the capital, with its large buildings and larger budget, has attracted attention around the world. Polis recently had the opportunity to speak with John Lancaster about the development of the city, its striking architecture and reporting for "Tomorrowland":

What do you think President Nazarbayev has tried to accomplish with Astana over the past 15 years?

I think he had a couple of purposes. There were some physical limitations to Almaty: It is hemmed in by mountains, so there wasn’t much room to expand. Then there was a geopolitical reason – Kazakhstan was a former Soviet republic, and after the breakup of the Soviet Union, there was a lot of concern that Russia had territorial designs for the northern part of Kazakhstan.

The third reason was that it was a national branding exercise, which explains some of the architecture and dramatic effect that Nazarbayev was aiming for. Kazakhstan is a country that most people in the West know nothing about, and yet it has all of these energy resources and has aspirations to become a prosperous country. There was a sense that they wanted to show the world that they were this modern, forward-looking country with resources and technical skills. And what better way to do that than to build a city that looks like something out of the Jetsons? They wanted a splashy capital and wanted to make a statement. 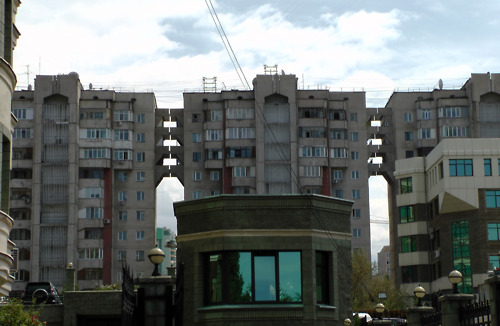 Housing from the Soviet era. Source: Archive of Affinities

The city certainly moves away from Soviet architecture and design. In the rebuilding and planning process, what became of existing Soviet buildings and city plans?

One should be clear that this wasn’t a blank space — there was a Soviet-era city there. The old part of the city is concentrated on the right bank of the river and has a very different feel. It’s not an unpleasant place – even though Soviet architecture has kind of a bad rep. There are trees, parks, the river in the center of the city, and to the extent that there is a street life and café life in Astana, it is most established in the right bank. There is sort of a human scale to this part of the city. Some of those handsome old buildings are being torn down pretty rapidly, and there are a lot of modern, high-rise apartment buildings going up.

One of the most lively places in the city is a Soviet-era amusement park. It’s kind of ironic that they built this huge new capital, and some people still gravitate to the old parts of town. The older part is really still an important part of the urban fabric of the city.

How would you characterize street life in the newly constructed sections of Astana?

It’s built on this grandiose and monumental scale. It’s really a statement, so there are a lot of big, daring buildings and plazas. The thing that saves it from being too totalitarian is that there is a slightly Disneyfied aspect to the place. They want people to have fun, too. For example, in front of the Palace of Peace and Harmony is this fountain that is designed to encourage splashing. A big shopping mall culture has sprung up, and to the extent that there is street life, it mostly takes place inside the malls — there are a lot of restaurants, movie theaters, things like that. It’s a pleasant place to stroll in June, but those big open plazas must be pretty bleak in January. 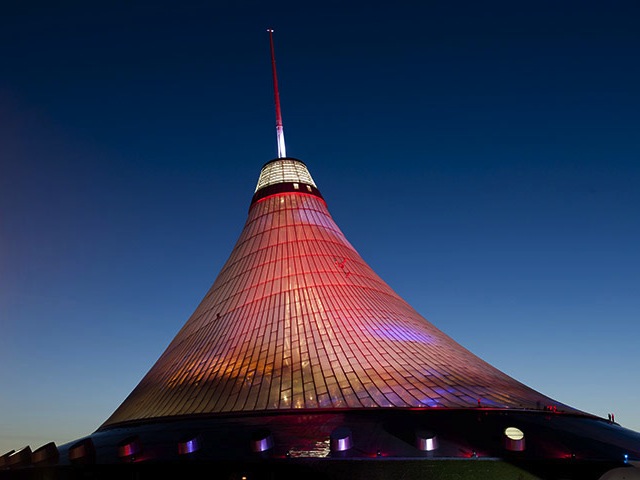 You mention the totalitarian aura of the city, and in your article, you talk about the dominance of Nazarbayev in controlling the design and construction of the city. Can you tell us more about his role in design and planning?

This is his baby, his project. He conceived the city, it was his idea to move the city, and he’s been intimately involved in the planning. Nothing big happens there without his stamp of approval. It even comes down to small details, like what kind of flowers they plant. He consults very closely with his architects, and he’s always throwing ideas out and sending his architects on these frantic scrambles to figure out what he wants. A lot of the major buildings, like the Palace of Peace and Harmony, were his ideas. He said, "We need a pyramid," and so they built a pyramid. The same is true with Baiterek, which in some ways is the most distinctive building. It looks like something out of the Martian Chronicles, and the chief architect says that Nazarbayev drew the design for this on a paper napkin. He is the unchallenged authoritarian leader of Kazakhstan.

It sounds like Nazarbayev is unchallenged in terms of the design of the city. Is there any challenge to his rule in Astana?

There is political opposition, but Nazarbayev is relatively popular. The economy has done well after a terrible period in the 1990s following the collapse of Soviet rule. There is a middle class and a sense of growing opportunity. The discussions are really about what happens after him, given that he’s already in his 70s. There is not an obvious successor in place, and democratic institutions are pretty rudimentary. There is a lot of enthusiasm in Astana, but there is an undercurrent of nervousness about what happens next and about whether this city and pace is sustainable.

Astana's population has more than doubled in the last 10 years. Can you tell us more about the urban planning that went into making the capital what it is today? How are they accommodating such a rapid population increase?

The short answer is: with difficulty. There’s no question that when they shifted the capital there in 1997 – it happened almost overnight – there was a very difficult teething period. They had these big government ministries thrown up in a hurry and not enough places for people to live. So there were a lot of people living in government dormitories and crammed into apartments, while their families still lived in Almaty. Government employees would stay in Astana during the week and go home on Friday night. It was very much a commuter culture for the first decade. That is changing, because residential construction has started to catch up. It’s becoming a healthier environment, and there are more families moving up there. People do talk about the lack of housing, though it seems to be improving. 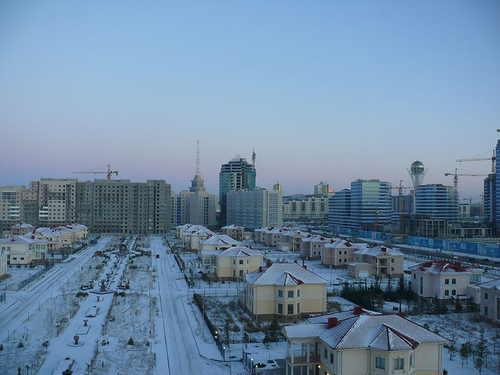 Besides housing, what other challenges does Astana face as a rapidly growing city?

There are environmental challenges, especially water. Astana does have a river that runs through it but there are a lot of demands on it. That will be a constraint to growth. During the Soviet era, Astana and the surrounding area was an agricultural center, so there was a lot of intensive farming that depleted the soil. They are doing a lot to try and hold the soil in place; they have big dust storms at times. I don’t know how successful they’ll be long-term, because the soil is saline, and there is a limited water supply.

They definitely have some growing pains. When you build a city in haste, some of the construction is shoddy. There is a Potemkin quality to some of the buildings. I stayed in an apartment building when I was there, and the elevator was always broken, and the roof leaked every time it rained. But many buildings are not like this. They acknowledge that some of the initial work was shoddy; they’re trying to slow things down and do it right now.

Despite the challenges, Astana has changed drastically in appearance and national importance in the last two decades. What do you think Astana will look like in 20 years?

In some ways it’s possible to extrapolate from what’s there now — the heart of the new city is pretty much completed. All of the main government buildings are in place. Now you see more of an emphasis on residential construction. But I think the feeling that you get in the central part of Astana, with these colorful buildings and dramatic sight lines, is the effect they’re aiming for and will preserve going forward. It’s not a finished city by any means – no city is truly finished – but in terms of establishing the style and signature, I think they’re done with that phase. Now it’s about livability, schools, housing, roads — the less glamorous and equally essential parts of the city. They’ve been quite successful in making a statement. Whether it succeeds as a city over the long term, no one can say yet.