Planning in Kabul: An Interview with Pietro Calogero 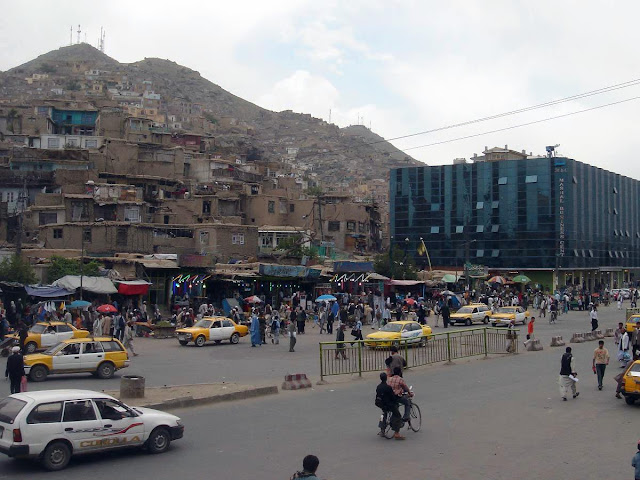 In central Kabul, new businesses stand beside the historic Deh Afghanan ("village of the Afghans") settlement.

For many of us, it is difficult to imagine Afghanistan without thinking of the Taliban, Osama bin Laden, ethnic divisions and political upheaval. The American invasion of Afghanistan has dominated our political imagination since 9/11. Originally considered a necessary incursion to halt al-Qaida, the invasion quickly turned into a project of nation building. More than a decade later, questions remain about the justification and outcome of this intervention.

In 2008, Pietro Calogero arrived in Kabul to do fieldwork for his dissertation in City and Regional Planning at UC Berkeley. He spent the year studying planning, urban informality and the introduction of international development practices as part of the American deployment. He currently teaches urban studies at San Francisco State University. He shared his perspective in an interview with Polis:

How do you do fieldwork in such difficult conditions?

I think that in any fieldwork, trust is a crucial issue, but this is especially important in a place of elevated violence and uncertainty. I had an advantage because I have known members of the Afghan-Californian community since 1987, so already had connections within a society that relies on character, references and reputation (this is the case in Afghanistan just as much as the U.S.).

But I also made a strategic move: I affiliated with the Engineering Faculty at Kabul University, to teach planning at the same time that I would be researching planning. That made it very easy to be completely transparent about my position and my agenda: both at the transnational and very local scale, I was identified as an academic interested in researching how Kabul was being planned. Becoming an instructor at Kabul University had two other unexpected benefits. First of all, I could compel suspicious agencies to meet with me, because I would arrange site-visits for my students. The municipality was very suspicious about Westerners — and for good reason. But they wanted to argue the case for their style of planning to the next generation of Afghans. The second unexpected benefit of teaching at the local university was the tremendous respect that I got from Afghans at all levels, because I was teaching the next generation. 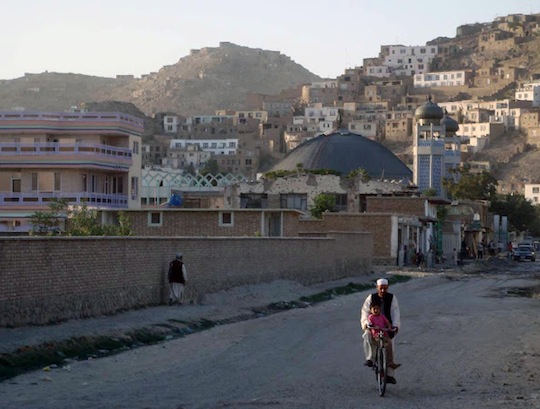 The Jemal Mena district in southwestern Kabul was shelled flat during the civil war (1992-1996) and is being rebuilt, mostly by Shi'ites. The mosque in the center is one of the major Shi'ite mosques in the city.

What did your research teach you about planning in Kabul?

I arrived in Kabul immediately after working for nine years in the San Francisco Bay Area. My immediate impression was that Kabul was being planned. That reaction clashed sharply with the reactions I got from both Afghans and international aid workers. Both groups seemed to hold an idealized view of how planning worked "in the West," whereas I had seen how chaotic, inconsistent and corrupt the planning of San Francisco is.

So the first thing I learned was what Jennifer Robinson has said so eloquently: Kabul in particular, and cities in the Global South generally, are judged by a double standard against Western cities. Is there a problem with corruption in the planning of Kabul? Yes — but that means it is like American cities, not unlike American cities. Second, I did find a lot of political disruption in Kabul. The city has been occupied by foreign superpowers in two separate decades (1980-1989, 2001-2012), which compromises the sovereignty of the national and municipal regimes, both of which are situated in this capital city.

There are profoundly different expectations about the meaning and methods of planning, from Soviet/Robert Moses-style, command-and-control planning to a more neoliberal, profiteering and generally ineffective form of communicative planning. Trying to sort through this complex situation was challenging. Eventually I settled on political rationalities as the lens to use on this situation. But the choice of that lens was driven by what I observed in the field. 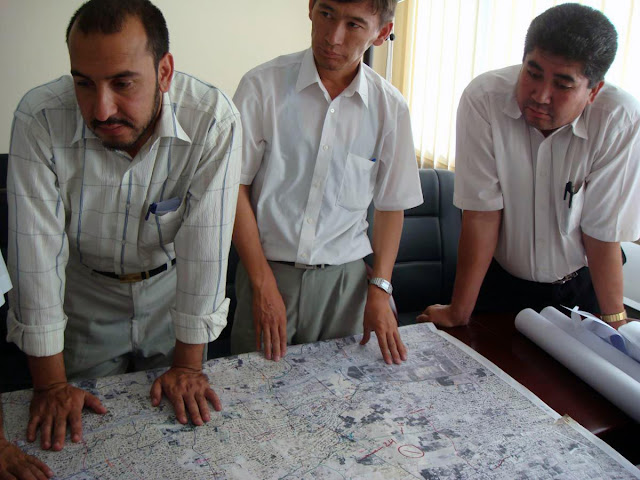 What kind of ethical challenges did you encounter as both a researcher and practitioner working in Kabul?

One of the primary ethical dilemmas was the idea of building my academic career on the backs of extremely poor people. I was pretty blunt about this problem and presented it to Afghans as well as the internationals I worked with. Foreign consultants get paid very well in Kabul — often $250,000 per year — and I find that unconscionable. I tried to get paid as little as I could afford and still be there, on the rationale that I was being paid in career development. As long as we all understood that, I found that interviewees were much more comfortable talking to me.

While teaching at Kabul University, I also had to be very sensitive to the quid pro quo of my role. I had 12 students in the fifth-year architecture class. As an American, I could open doors at the U.N. and other foreign agencies and get my students into a position to request job interviews. I got major, career-starting jobs for four of my 12 students, and we all understood that as fulfillment of one of my core obligations as a foreign instructor. 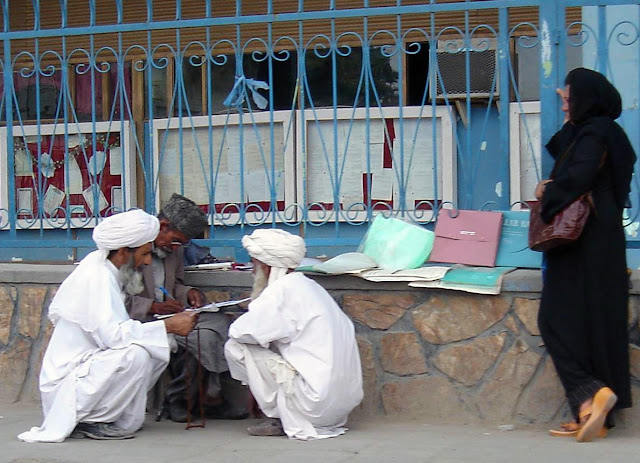 A professional scribe drafts a legal document for two elders, while a female relative looks on. The sidewalk in front of the Ministry of Education was known as a place to hire scribes before it was walled off to prevent terrorist attacks in 2007.

What lessons that you learned in Kabul can you bring to the U.S.? For example in terms of housing, property ownership or planning?

I learned two important lessons. First, democracy is a means, not an end. If there is any sort of general political claim around the world, it is that people desire government accountability at both the national and the local level. As Americans, we tend to collapse democracy and accountability together as the same thing; in practice, the former is only a strong incentive towards the latter, and technical democracy is no guarantee against regime impunity. This is a problem for poor Afghans in relation to an urban elite in Kabul and for all Afghans in relation to the Americans occupying their city. I have become much more committed to the idea that regimes must be held accountable by any sort of effective means, and I have become alarmed about how ostensible democracy can be subverted and perverted away from promoting accountability. One of the greatest expressions of this failure at the urban level is the persistence of urban informality in democratic societies.

The second lesson is the idea of property rights as human rights. In American jurisprudence, property is typically described as a "bundle of rights" whose inter-relationships are under constant negotiation. In Marxist analysis, these are generally grouped into "use rights" and "exchange rights," with the assumption that "use rights" align implicitly with human rights and the overused buzz-phrase "right to the city." I think we need to be more careful about that analysis. Some of the "exchange rights" of property claims are a means to realistic access to livelihoods. Whereas Marxists might be skeptical about the idea of wealth generation, my skepticism is more about confiscatory wealth generation. So I am very concerned about Hernando de Soto's advocacy of extending the "free" de-regulated market to informal housing, but my concern is that urban villagers retain some right to security of tenure, as well as access to income in the city. To make this argument, I think I need to reject the "use right"/"exchange right" dichotomy and evaluate what it means to call property rights a human right.