On View: ‘The Empty Plaza’ 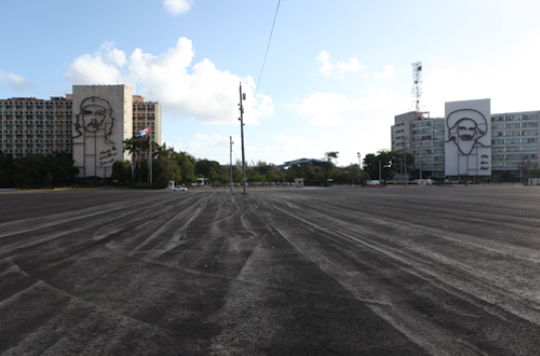 Political events and public protests are often held in large communal spaces such as town squares and plazas. But what do these places hold and represent after the public leaves? In "The Empty Plaza/La Plaza," artist Coco Fusco depicts an empty Plaza de la Revolución in Havana, Cuba, as a meditative space of revolutionary promise and memory. Presented mainly as a documentary of Fusco's passage through the civic space, cinematic scenes of architectural details occasionally intersect with vintage footage of post-revolutionary Cuba. The video is narrated in Spanish, with text by acclaimed Cuban journalist Yoani Sanchez describing what is being shown, and what isn't.

Coco Fusco is an interdisciplinary artist and writer. She has performed, lectured, exhibited and curated internationally since 1988. Her first solo show at Alexander Grey Associates will be on view from Feb. 22 to Mar. 31.