Design to Occupy in Berkeley

What are the design lessons of the Occupy movement? In this interview, Robert Tidmore and Alex Schuknecht, landscape architecture students at UC Berkeley, discuss the protests, police brutality and floating tents at the university in November 2011. They share how the movement's alternative use of space led to a re-evaluation of their roles as students, designers and citizens.

How has the Occupy movement influenced your thinking on the practice of landscape architecture?

Rob: As designers of public spaces, I believe we have a mandate to uphold and defend the loftiest ideals of public space. This includes the ability to assert our first amendment rights by occupying and using public space for protest. The brutal police crackdowns on #OWS protesters over the past several months have made it clear that our rights to public space are far more limited than we previously thought. To me, this raises serious concerns about our society’s control of dissent. If the people do not have the right to protest in public, where will protest occur? Public space must be made available to all publics, and as designers we should use our creativity to ensure that this is the case.

Prior to being involved in #OWS, I thought it was enough to simply create spaces that facilitated large-scale gatherings, promoted community and fostered civic engagement. My recent experiences have proven that this is not sufficient. We must take an active role in our communities and use our diverse skill sets to fight inequality and tackle the complex problems of our day. Landscape architects are trained to build attractive places, but we should do so much more. We are inherently problem solvers and have the ability to envision better worlds. We are uniquely situated in a field that bridges social, cultural and environmental concerns, and we should address these issues through activism in addition to design.

Alex: Many of us came to landscape architecture with the belief that the practice would be a good outlet for our idealism, and I’ve gotten a bit jaded at times learning that the design business is often much more reactive than it is proactive. In a development-based business, where the goal is to make money, your ideals can easily be shoved to the wayside. For me the movement reinforces that, while I believe in many of the merits of professional design practice, it is imperative that we examine why we do what we do, even at the most basic level. I’d argue that, for example, none of the projects you see today do anything to challenge the dominant economic structure — not that they should or even can — but it’s something we need to think about, and Occupy reminds us of that. 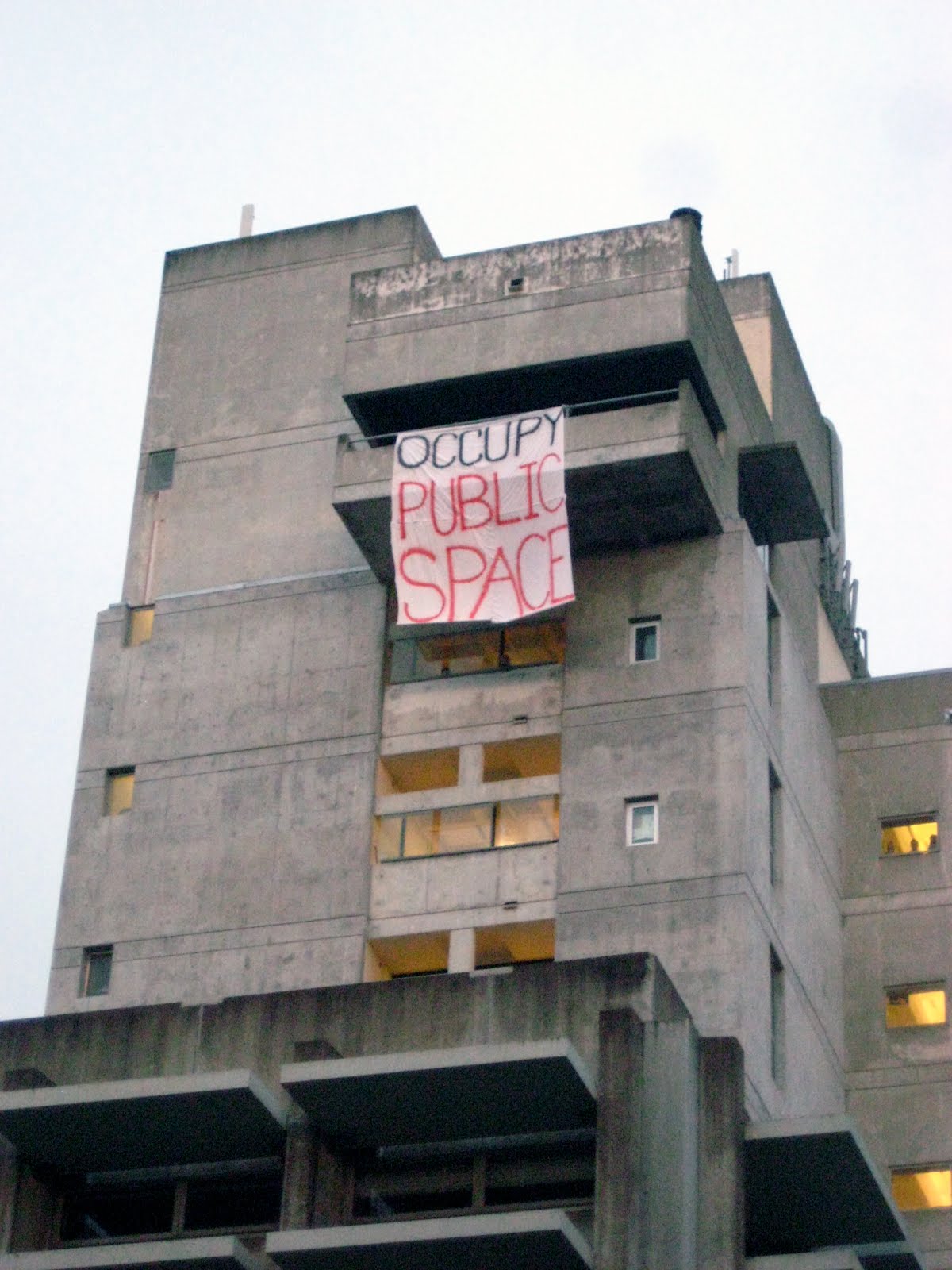 Wurster Hall at UC Berkeley, the home of the College of Environmental Design, occupied.

Has it changed your perspective on design education?

Alex: We have a unique opportunity in our limited time as students to attack design in a completely creative and uninhibited way. The constraints of the market don’t necessarily apply, which means that we can spend our time doing strictly things that we feel good about. But what the Occupy movement and similar projects that I’ve been involved in have reminded me of, is that feeling good about your work is the ideal situation always. Design education is not just about how to design well, it should be about how to achieve your vision that in your way aims to make the world a better place, and all of the pieces that go into that. Good ideas are one thing, but the ability to navigate those ideas through business and politics is vital, because the market would just build the landscape around us entirely on its own terms if we let it. Learning how to design against the tide, and survive doing it, will be a big part of the remainder of my education.

Rob: Being involved in something like #OWS that was deeply meaningful and extremely rewarding. Students should be doing this as part of their education. I would strongly advocate for the inclusion of smaller-scale design projects that have local, real-world impacts. Students could partner with local community groups in a design-build exercise, or whole studios could be arranged around solving a particular design problem for a local nonprofit. Creative activism should be part of the core curriculum at all design schools. 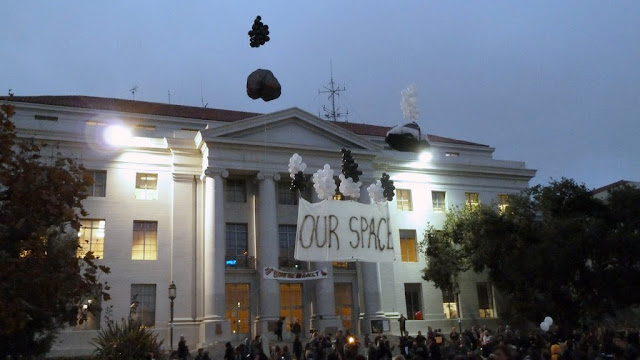 Floating tents in front of Berkeley's Sproul Hall, the day after the Occupy Cal camp was removed.

Can you tell us about your experience working on the floating tents intervention in Sproul Plaza?

Rob: The floating tents project was literally conceived, built and unfolded on Sproul Plaza in less than 24 hours. It was partially a response to the forceful destruction of the Occupy Cal encampment (that I had been sleeping in) at 3 a.m. the previous morning by 120 police officers in riot gear, and continued violence against students. The same plaza that only a day before had been the stage for Robert Reich’s “the days of apathy are over” speech and home to the hopeful celebration of over 7,000 students was cleared by a front-end loader. Watching all of that energy, hope and determination being destroyed in the early morning was heartbreaking. Walking away from the empty plaza that morning, I felt very strongly that we needed to re-occupy the space and rekindle the hope and elation of the Occupy movement.

As the LA 203 studio convened later that day, our professor Judith Stilgenbauer urged us to respond to the recent events on campus, and an hour later the concept of floating tents and a floating banner was born. We sketched out the idea on scraps of paper, then made phone calls to locate the most important component: helium. The next morning we picked up two tanks of helium and spent the rest of the day crafting our piece: filling balloons, attaching guylines to the tents, spray-painting the banners and organizing a march to Sproul. It was designed as a quick intervention to intelligently challenge the administration’s policies, and I don’t think any of us anticipated that it would attract such widespread support.

Alex: There was very minimal research, and we had very few challenges. It was just a matter of doing, and the excitement and will to do it was there. The hope now is to continue to feed off that excitement and not let it wane into the humdrum of professional life. 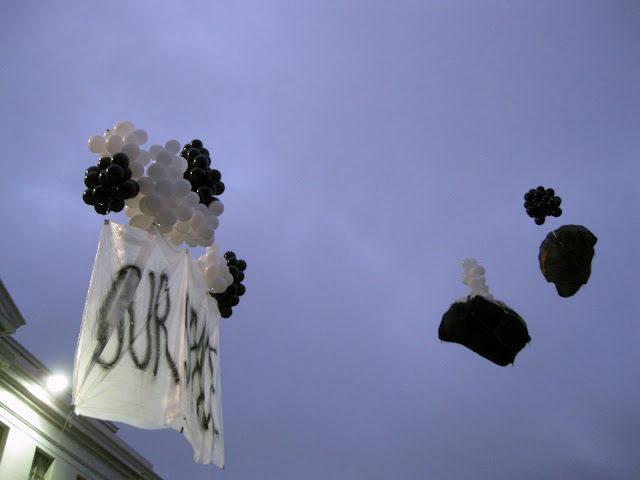 Do you consider your intervention political? Artistic? Architectural?

Alex: All of the above, definitely. The intervention was an artistic response to the politics of space. The larger impetus for this was the burning need for a response to the violence that had been carried out against students and faculty by the administration and police. I watched kids take overhand baton swings to the face so that the police could tear apart three tents that sat in the grass at the side of Sproul Plaza — it was asinine. And a response from our department felt doubly important. As students of landscape architecture, we see ourselves as stewards and advocates of public space, and our role as architects, landscape architects and planners is absolutely political. If we’re not fighting to serve people — which often means challenging the status quo — then who are we serving and why bother?

Rob: I agree. Public space is innately politicized, as we saw in the administration’s reaction to the Occupy movement on campus. To make an impact in the plaza large enough to rekindle the hope and elation of the movement, we needed a statement that was spatial. And to fly in the face of the administration’s ban on tents, calling attention to the absurdity of the situation, called for an artistic reinterpretation.

Would you do this again? Why or why not?

Alex: This was a spontaneous intervention, so repeating it wouldn’t make much sense. But I would absolutely engage in any project that I felt added to the dialogue about public open space, justice and economics, food politics. In a very broad sense, I hope to do this again and again and again until I can look back and say I’ve made a career out of doing only things that I feel contribute to the common good. Maybe I’m naïve, but seeing my tent floating 50 feet in the air on the evening news gave me a week-long high, and reflecting on the experience has never made me question it. Absolutely something along these lines will happen again — the ideas are already rolling.

Rob: Without question. The absurdity of the events that unfolded on campus that week demanded an intervention. I certainly will continue pursuing projects that question the status quo, promote community activism and invite critical analysis of injustice and inequality. Activism and engagement have been key components of my experiences prior to coming to Berkeley, and a design education gives me the ability to pursue these values in even more interesting ways. I’m very excited about the possibilities that this opens up. There are already other projects in the works.