The Price of Public Green Space 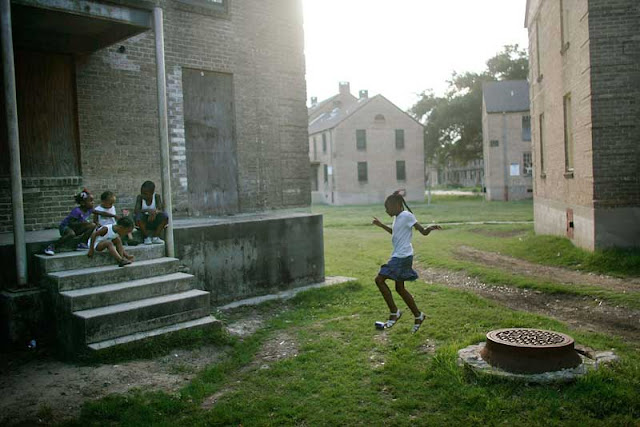 A New Orleans public housing development on the verge of demolition. Source: The Bag

Is it possible to assign a monetary value to public green space in cities? Alex Lo recently published an assessment of methods based on choice modeling and cost-benefit analysis. He focuses on the contingent value method (CVM), in which stakeholders are given a questionnaire survey and asked to state the most they are willing to pay (WTP) or willing to accept (WTA) in return for a change in urban green space. Lo identifies a conflict in this approach between "pragmatism and pluralism," explaining that the reduction of value to choices based on self interest (intended to facilitate objective policy decisions) ignores many of the diverse factors that constitute our relationship with public green space, and which have been more effectively analyzed through


multiple knowledge frameworks, creating a pluralistic research tradition ... including natural science, urban planning, economics, cultural studies, psychology, geography, architecture and sociology. Despite variations in research assumptions and contexts, distinctive conceptions of values are recognized and accommodated. The research atmosphere is sufficiently open to accommodate the use of different methodologies, including monetary valuation techniques.

Lo presents an alternative known as deliberative monetary valuation (DMV). He describes it as "a discourse-based valuation approach for eliciting multiple values in group settings," explaining that


DMV is drawn from the theory of deliberative democracy. Environmental valuation takes place in deliberative institutions, such as citizens' juries and deliberative polls. By merging economic and political processes, these institutions create a social learning experience and a social space from which values for a particular environmental good are debated and determined. Information sharing and critical reflection are encouraged to allow preference transformation and reconstruction.

Individuals from different walks of life are recruited as deliberators to conduct one or several sessions of small-group discussion on a particular topic. Information is supplied by researchers and deliberators and exchanged with inputs from experts. Peer evaluation takes place following a principled set of rules about norms of communication. Deliberators interact with each other and mutually adjust their positions as they elaborate and defend their values and claims. Either an individual or a social WTP can be determined as an output. DMV is accessible to ethical and collective-social issues and different value categories.

For my current study of courtyards in Moscow, I'm interested in understanding values connected with public residential green space. However, neither the CVM nor DMV seem appropriate. In addition to the problems with the CVM identified by Lo, different people have different constraints and tendencies when it comes to money, which could make the results misleading. For example, one respondent may be deeply in debt, and thus less likely to pay for a public amenity they value, while another person may simply be less cognizant of budgetary limitations, and thus willing to pay for almost any hypothetical proposition. As for DMV, while undoubtedly interesting to pursue, its potential for generating relevant information for this study doesn't justify the amount of time it would take to implement. It also seems that group dynamics could silence some people's voices if the "norms of communication" aren't sufficient, or sufficiently upheld. For both approaches, it isn't clear how to best select participants, which is one of the things I'm most concerned about.

At this point I'm focusing on how residents of urban apartment buildings view the design and management of green space around their homes. I hope to uncover specific benefits and problems according to the frequency with which they appear in interviews and survey responses. Prioritizing them via monetary valuation could be a follow-up step, but I'm not sure this is necessary. If something comes up in a sufficient number and range of responses to an unbiased inquiry, wouldn't this be enough to show its significance without using money as the frame of reference?

Since my objective is to assess the establishment and maintenance of public green space, as opposed to making a case for funding or preserving it, monetary valuation isn't the first priority. However, the study of values and value judgements — known as axiology — is central to this research as well as urban governance and development in practice. It helps with determining what to add, preserve or remove, as well as how to make these changes happen. This is best accomplished through democratic processes, so I think Lo is on the right track.

Lo, A. Y. (2012) The Encroachment of Value Pragmatism on Pluralism: The Practice of the Valuation of Urban Green Space Using Stated-Preference Approaches. International Journal of Urban and Regional Research, 36: 121–135.