Mining the Grid in San Francisco 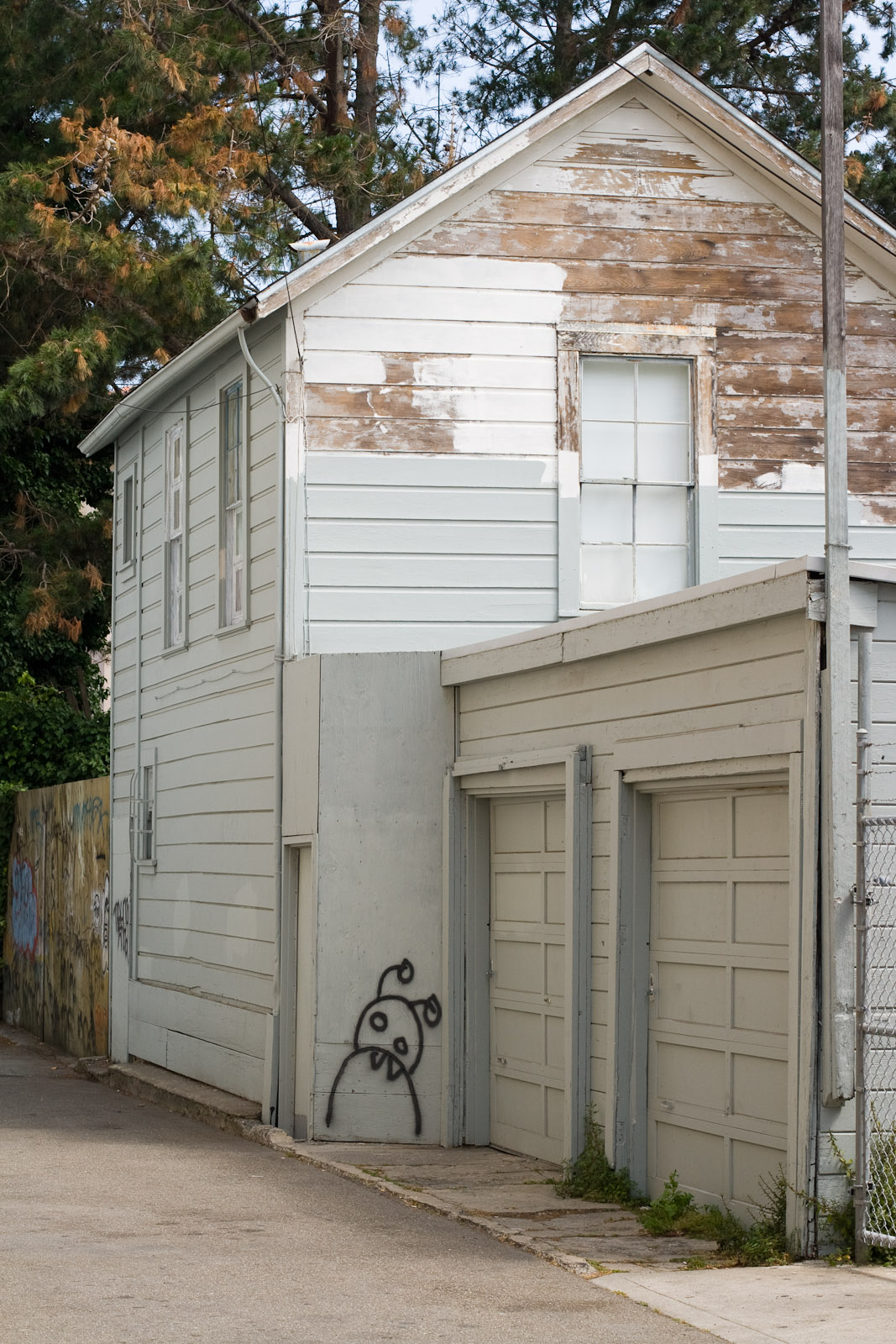 Jason Miller is a young photographer who practices his craft in the San Francisco Bay Area. His photography offers a visual catalogue of discreet places throughout the monumental grids that make up the city. Connecting the individual experience of memory with a desire to understand the unrecognized urban history of new places, Jason’s work challenges us to take a closer look at our cities.

How do you approach taking a photograph?

I approach taking photographs by walking and looking. I might have a destination, I might just head out. I like to start early — light is great in the mornings here. San Francisco has tough light, to be honest. The ocean wind keeps our air remarkably clean, so sunlight, particularly midday sun, is pretty fierce — no diffusion. The fog, of course, makes for beautiful light, but it can be so cold when the blanket rolls in that walking the streets is not the preferred activity.

I try to vary my routes; I try to walk different streets on different days. For a while I had a few maps of San Francisco, and I'd mark off the streets I walked down with the vague goal of walking down every street in the city. I stopped that when faced with the Sunset — there are miles of parallel streets out there. I sometimes make a little game of my route: turning left and right alternately at each intersection to "mine the grid" and see where it takes me. I try not to take that too seriously, because you sometimes find yourself faced with a big old hill that you'd rather skirt than climb. 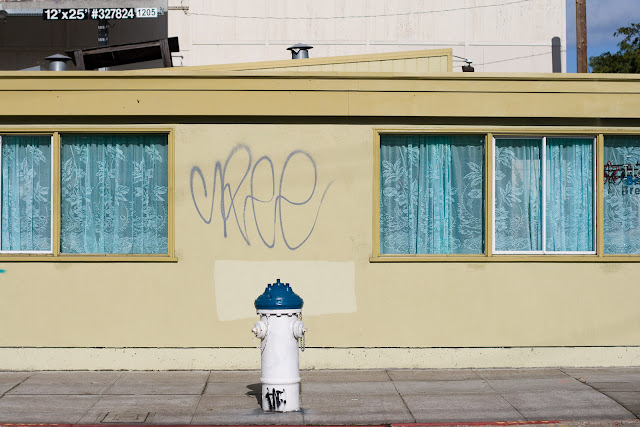 I definitely "find" photographs rather than "create" photographs when I'm shooting on the street. I use a tripod occasionally and will spend some time preparing a shot, but I try not to interfere or stage-manage.  I approach things straightforwardly — no dramatic angles, no tricks. I have long loved Atget and Sander; their work is so straight, yet incredibly beautiful and strong. I love that Atget, now considered a great artist of late 19th and early 20th-century photography, photographed to document for the French state and to sell "types" to artists. The subject matter tells the story, not the photographer. On the other hand, in recent work with still life, I've been spending a lot of time stage-managing the subject matter, but I still shoot them head-on, square; no funny stuff. 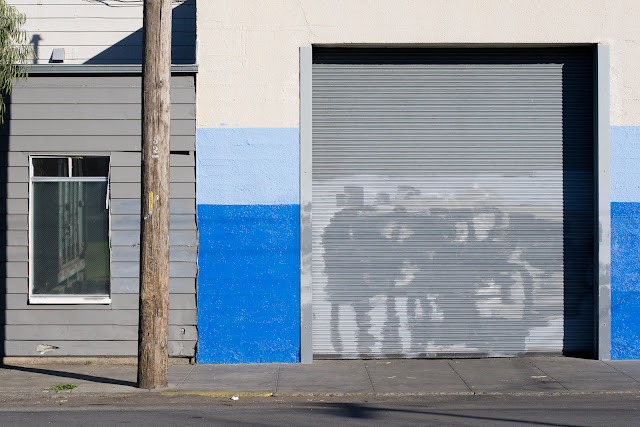 How does your work reflect the urban experience of San Francisco?

It's growth is written on the fabric of the city by way of the street grids. Each leap in growth extended the grids. They aren't perfectly aligned. The obvious change in grids is Market Street — South of Market is newer than North of Market. The area I affectionately call "the crotch" of the city is where the Mission Dolores grid, another older grid, meets the extended South of Market grid. Duboce street rides another fault between the grids: Castro street swings to become Divisadero, Scott, Steiner, Fillmore, and they all dead-end on Duboce Street. This is the southern end of the original downtown grid. The Mission Dolores grid extends over the central hills on 17th Street, but ends at Stanyan. The outer lands' grids, relatively new, shuffle into the downtown grid at Arguello (on both sides of the park — there is a two block stretch of Arguello on the South side of Golden Gate park that splits the two grids). It's an environment structured by real estate speculation and the hills, and the conflict between the two.

The change that brought forth the city is shown in the street layout, but subsequent change, obviously, is in the buildings, parks, streets, and people. The 1906 earthquake and fire chewed up most of the old city, leaving the oldest buildings at the edges. Then we have freeways getting built, industry draining away from the port, urban renewal, the Internet boom of the late 1990s, and so on. You can date most everything in the city — even people, to some extent — by one of these changes.

On a basic level, I photograph change and the evidence of change: Abused buildings, discarded stuff, vandalized trucks, Victorian houses with Art Deco storefronts on the ground floor. In the way that one would portray generalities by focusing on specifics, I portray the experience of these big changes by documenting small ones. Or something like that! I write all this upon reflection - I don't carry this with me as I walk, at least in active consciousness. 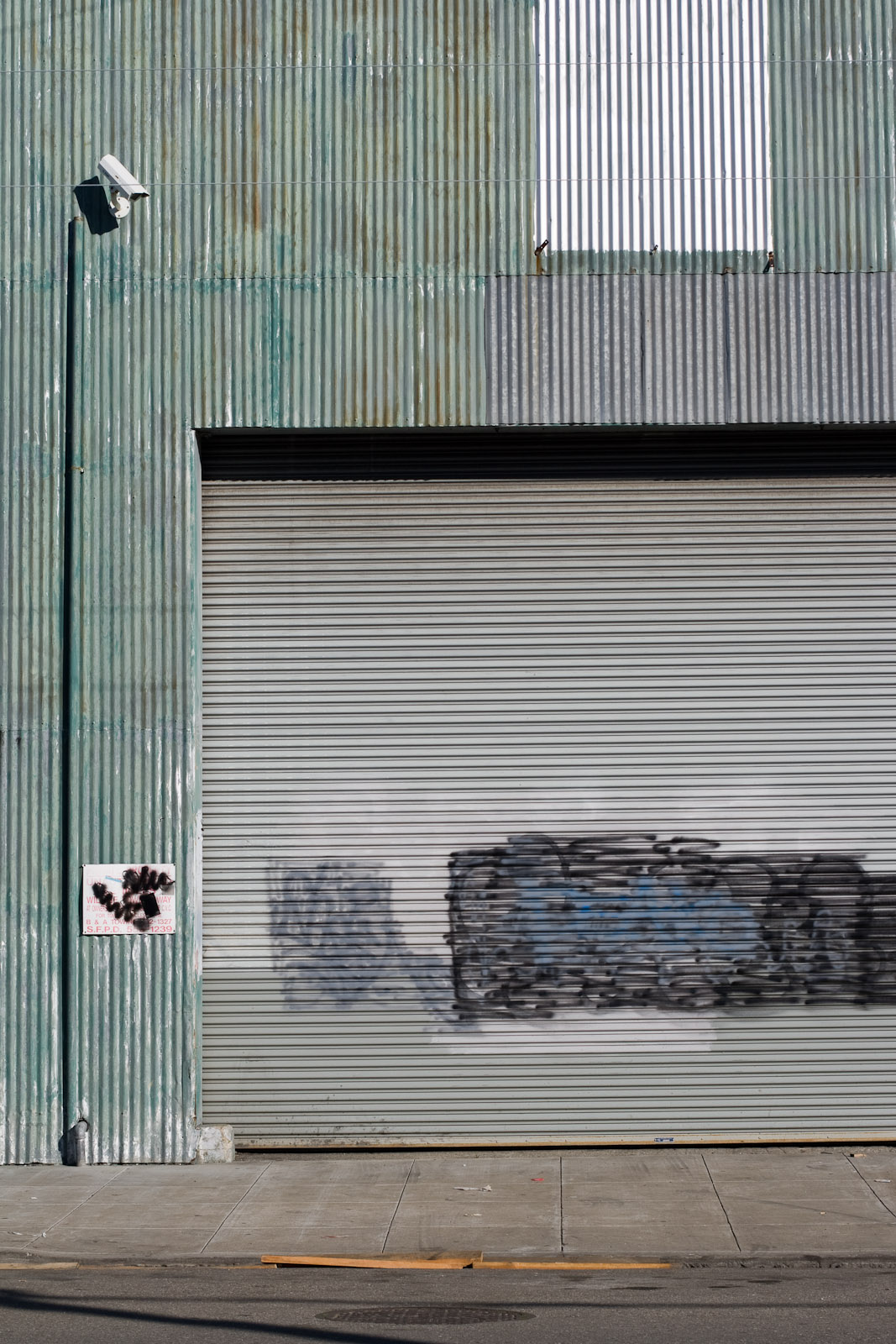 What are the themes you have explored, are exploring and would like to explore in the future?

I think themes emerge from the corpus after the fact. I look at the images that I've come up with and notice that, well, I've been shooting a lot of street corners this year. I tried for a while to be methodical. I wanted to document alleys in San Francisco — I made a list, circled them on my maps, would walk them end to end. Some good stuff came out of it, but not what I thought I'd find. I think I got deep into thinking about the concept of an "alley" and it became a game of working down a checklist, which I didn't like. I did get to see lots of great graffiti, though.

For a long time I've photographed trucks that have been painted. Once you start looking for them, they are everywhere, and you can watch them change over time. There was one truck that started out primer gray, and a few years later was a riot of great pieces that covered all sides. Then a "For Sale" sign appeared, and the truck disappeared. There's one truck that has a piece on it's side that is of a truck with a piece on it's side. It's like meta-graffiti.

I tend to explore neighborhoods. South of Market is particularly fascinating. I walked much of SoMa when I was tracking down alleys, and you could work that district forever. The Outer Sunset is pretty fascinating — it's like another planet. The light is always good in the Sunset because of the fog and haze. It can be so deserted and feel far away from the rest of the city. I was fascinated with street furniture and infrastructure for a while. San Francisco has telephone poles on the sidewalks, which makes for great interplay with life on the street. There is a surprising amount of yellow used on telephone poles, bus stops, bus shelters, curb cuts — I did a series called "utilities" that worked off the yellow in this kind of street clutter. 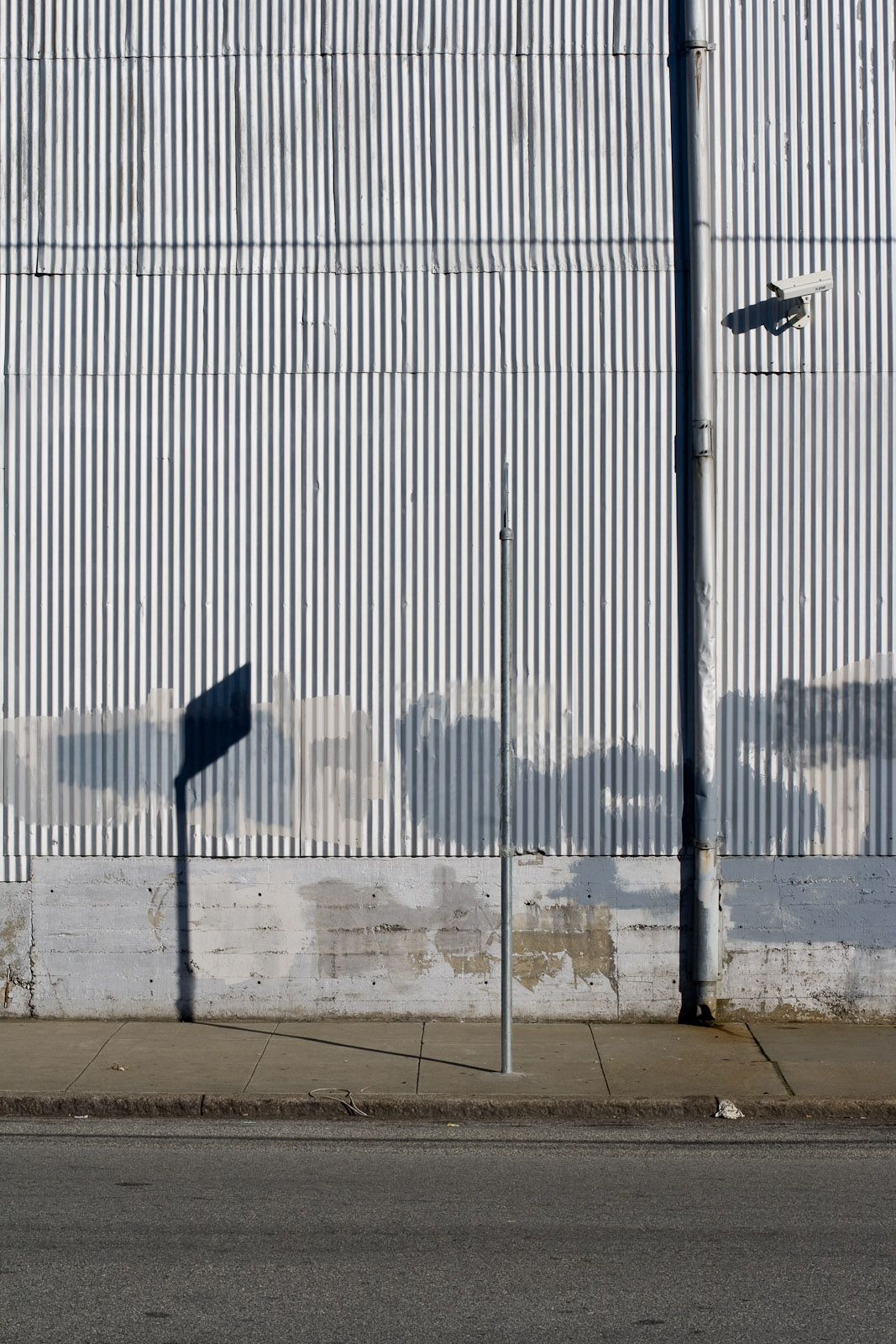 I am currently working on something a little different. I've been photographing still-life collages, using personal archives and ephemera as subject matter. It's not so much about exploring space as exploring time. I love to use old photographs in these collages.

What I'd like to do is really dedicate time to a specific place. Something like Mission Bay, where the land has gone from railroad yards and industrial warehouses to medical offices and condo megastructures in a remarkably short time. There is practically a new city down there. The relatively new T-line Muni streetcar still runs through some oddly built-up deserted streets. I worked as a librarian for Anshen & Allen (architecture firm) when they were starting on the new UCSF hospital at the end of 16th Street, and I realized that the lot they were planning was a place I'd taken many photos in over the years. It's changing fast. I would like to just document the changes — not for nostalgia or out of pity, but just seeing, specifically, what's happening. In this respect I'm influenced by Anthony Hamboussi. He documented Newtown Creek in Queens and produced a beautiful book of images of this literal backwater. He also did a project on the commuter-belt railroad of Paris that is just stunning — I wish I could make work like that. 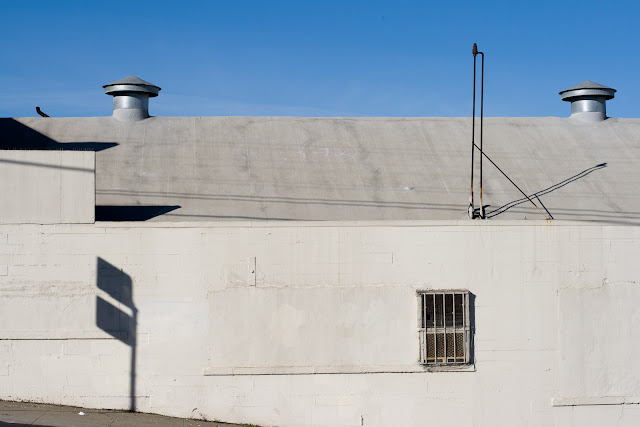 Why and when did you start to take pictures?

My dad was an avid photographer and gave me a little 35mm SLR when I was probably 10. He was a good role model in that he always had the camera out. He was an antiques dealer, and for that work he took a lot of perfunctory photos. He carried a little folding Polaroid SX-70 in his briefcase. I would use that a bit, though the film was expensive. He also collected photographs: daguerreotypes, tintypes, ambrotypes, CDVs, stereoviews. I was interested from an early age in the differences in processes and the history behind different kinds of photos. I was always on the road with him; he traveled all around New York, Pennsylvania and New England. We'd get to some dealer's house or shop, and I'd wander off exploring, always with a camera. I can't think of how many little towns in the rural Northeast I wandered around with a camera before I really knew what I was doing.

I guess I started to photograph to record what was around me: finding myself in a new place and using the camera to poke about. I haven't really ever stopped this process of "getting to know the place." Certainly I've had slower periods, but I've moved around a lot, and every new city is a chance to walk and look and shoot. Shooting while exploring makes you slow down and look at specifics. Most of our vision is pretty generic — I think most of what we actually see is completely low-res peripheral vision. Our brains get a minimum of information from our optic nerves and use our past experiences to fill in the blanks. The camera is a great tool for looking closely, with a bonus take-away that you can look at it again. You can't make the stuff up that you find out there.