Participatory Public Art in a Favela 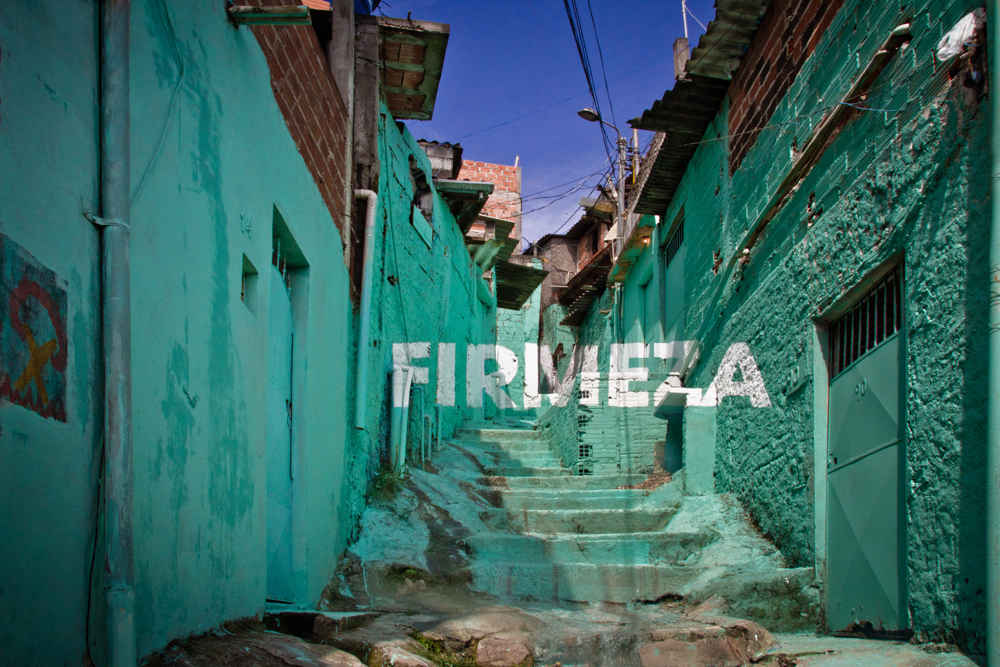 Last January, five Spanish artists spent almost two weeks living with a family in Vila Brasilândia, a favela on the outskirts of São Paulo, Brazil. Known as Boa Mistura, and describing themselves as "graffiti rockers," the group said in a publication that they "wanted settle in the slum, dissect it, smell it, live it and love it." The result was Luz Nas Vielas, a public art project in which artists and residents painted words like "beleza," firmeza" and "amor" on bright backdrops of flat color across the neighborhood's winding streets. The project is part of a series of participatory urban art interventions that Boa Mistura is leading in low-income communities and will be presented at “Virada Sustentável” in São Paulo on June 4-5, 2012. Boa Mistura recently shared their experience with me in a brief interview.

What did you hope to achieve with Luz Nas Vielas? Was the outcome what you expected?

With this kind of participatory urban art project, what we are looking for is to inspire, to use art in public spaces as a tool for change. We try to uplift the environment and make neighbors believe that they can change it for the best — small changes maybe, but this small change can inspire big ones. The outcome of this project has been amazing. Now Vila Brasilândia is appearing in the media worldwide, not for the negative reasons that these kinds of settlements are accustomed to, but for something positive. We hear almost daily from residents in the streets where we intervened thanking us for what we did, and that is the best reward you can have.

Why did you decide on the particular words and concepts that you painted?

Because this is what Vila Brasilândia, its streets, its stories and its residents inspired in us. When you work in the street, you have a responsibility to the environment. You are modifying it in a permanent way. It's not like a canvas, which you can take from place to place and even trade. Urban art is anchored to a particular place, and that's why we think that it should dialogue with that place, be linked to it. We create works expressly for each site.

On our first walks through Brasilândia, we saw that the becos and vielas (the narrow alleys that we painted) were the places where all the life of the favela was articulated. These alleys were a collage of materials and textures. Some of the houses were only bricks, others had a coating of concrete — we decided to flatten all this chaos and democratize this collage, which reflected economic differences, under the same beautiful color. The words were flowing through the mouths of the neighbors. There, they say hello with words like "beleza" or "firmeza," encouraging each other, and that is something that fascinated us. We felt nothing but love during the two weeks in which we were living there. And for us, the five words painted define the spirit and the essence of Brasilândia. 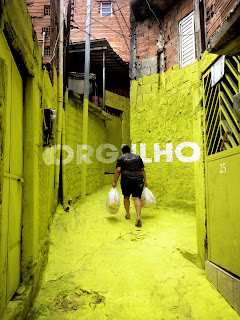 Was this your first project in a favela? What do you think the role of outside artists should be in favelas or other informal settlements?


This is our first intervention in a Brazilian favela, but not the first in this kind of area. In March 2011, we were in Cape Town, painting in the townships and the neighborhood of Woodstock. Part of that work focused on participatory and social projects like in Brasilândia.

As artists that use public space as a place to express, we have a responsibility. We have the capacity to communicate very loudly and in a direct way to the whole world, with no intermediaries. We should use this to keep attention on these areas, but not in a negative way, to try to change the perception people have from the outside — giving positive reasons to talk about them.

But the main reason why it is important to go there is because artists have the capacity to make people believe in change. When we were there, people looked at us like martians, saying "You came from overseas to our neighborhood… just to paint?" This is something that people didn't understand, because they were raised on the "you can't" mentality. Parents don't want to give false expectations to children, but at the same time, they are cutting their wings. If they see that people from other parts of the world decide to save some money to go there, just to paint, because it was their dream, they change their mentality a little. These places have a lot of energy — any small change you make can be the inspiration for big changes.

What is your next project?

We hope to carry on soon to another stage of "Crossroads," the participatory urban art project that started in Cape Town and continued in São Paulo. And many more projects — we don't like to talk about them before they materialize, but we never stay quiet!