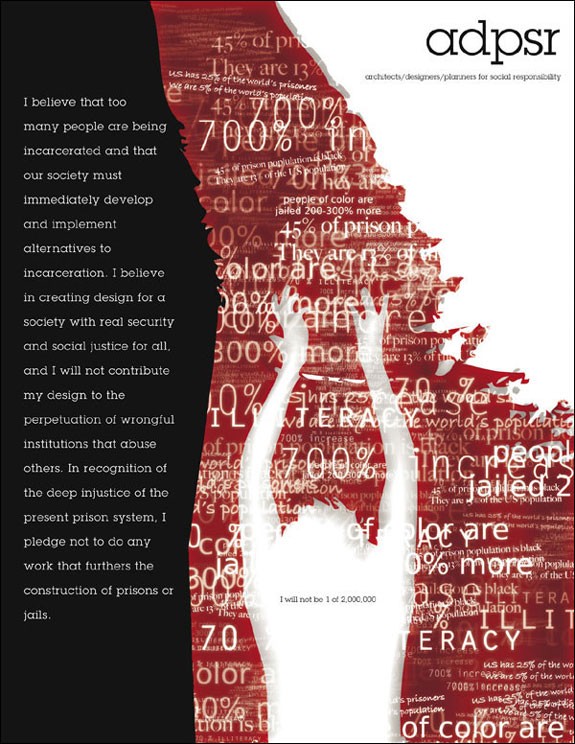 Launched in 2004, the Prison Design Boycott is an initiative led by Architects / Designers / Planners for Social Responsibility (ADPSR) targeting the ethics of architectural practice. The campaign aims to bring awareness and offer alternatives regarding the role of architects in perpetuating the prison-industrial complex in the United States.

Raphael Sperry, former president of ADPSR, founded and directs the Alternatives to Incarceration / Prison Design Boycott Campaign. He is a also a licensed architect practicing green building consulting in San Francisco. In this interview, I ask him about the evolution of the campaign over the past decade and consider the vision of design activism exemplified by his practice.

How and why did you become interested in the problem of prisons and incarceration?

After the rush to war in Iraq in 2003, I realized that our country is deeply ingrained in using violence to solve problems, and I wanted to start a conversation that might get some people to change their minds about how easily we license that violence in our names. As an architect, I realized that prisons are the built incarnation of the state-sponsored use of violence domestically. Prison design and mass incarceration are the connection between the easy use of violence and the daily activities of the architectural profession (albeit not to the individual work of most architects). As I researched the prison system, I began to understand more and more of its gross injustices — not just institutional violence, but also structural racism, the perpetuation of poverty and the degradation of communities. Our country needs more conversations that challenge the promotion of violence as a first recourse against problems and that advance non-violent conflict resolution and healing responses instead.

How has the Prison Design Boycott evolved over the past several years? What have been its lessons, successes and failures?

The campaign has been a big success in terms of raising awareness among professionals about the failure of our criminal justice system and the so-called “tough on crime” philosophy behind it. There is a huge amount of ignorance of how bad the problems with our prison system really are, as the media do a poor job of covering it, and the racial and class divides in our country insulate many professionals from the day-to-day injustices of the system. ADPSR has helped to educate a lot of people about what is going on. We have also gotten a really welcoming response from community organizations who have been working on prison issues for a long time, which shows that it’s possible to bridge those race and class divides and work together. For instance, we did a community charrette with a farmworkers’ organization in Stockton, Calif., to re-envision how a prison in their town might be converted to positive community uses and explore what the design implications might be.

One of the big lessons we learned along the way is that it’s not enough to just say “no” to prisons, but that architects and planners also have a deep desire to say “yes” to something else at the same time. We are optimistic professions. This widespread response, even from ADPSR’s supporters who completely agreed with our critique of the prison system, pushed us to do more research into alternatives to incarceration and their design and planning needs. All around the country there is a great need for more of these facilities — supportive housing, drug treatment, job training, community centers, etc. — and we have to advocate just as much for these facilities as we do against prisons. 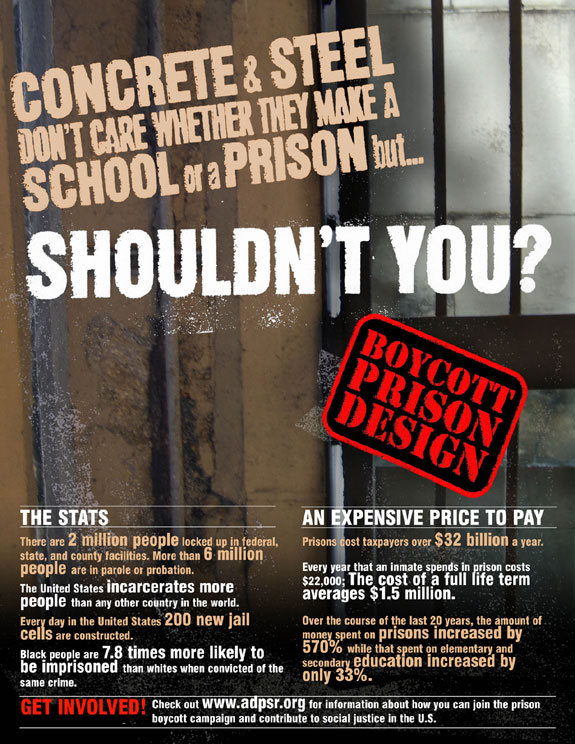 "Shouldn't You Boycott Prison Design" by William Arbizu and Kerstin Vogdes was a runner-up in the poster competition. Source: ADPSR.

How do you attract new supporters for your cause given the difficult job market that architects face in the current economy?

Even in this economy, prison design is a small sector of architectural billings, and it’s not a sector that’s easy to break into. We’ve never found that people are so desperate for prison work that they would compromise their principles for it. It the broader picture, looking at architects as citizens rather than just as client-seekers, communities are better off with fewer prisons and more alternative institutions.

Just as each government dollar spent on the military-industrial complex generates far less economic activity than a dollar spent on civilian infrastructure, the same is true for prisons. Education, job training, and drug treatment, for example, all cost far less to provide in the community than to people in prison. And prison expansion has clearly failed to reduce the incidence of violence in society, whether we’re talking about gang violence on the streets or police and correctional officer violence within the system. So if architects want our professional work to be part of building safer, more sustainable communities in the long run, prisons are a poor place to invest our own working hours. And we have a stake in that as citizens as well as design professionals. 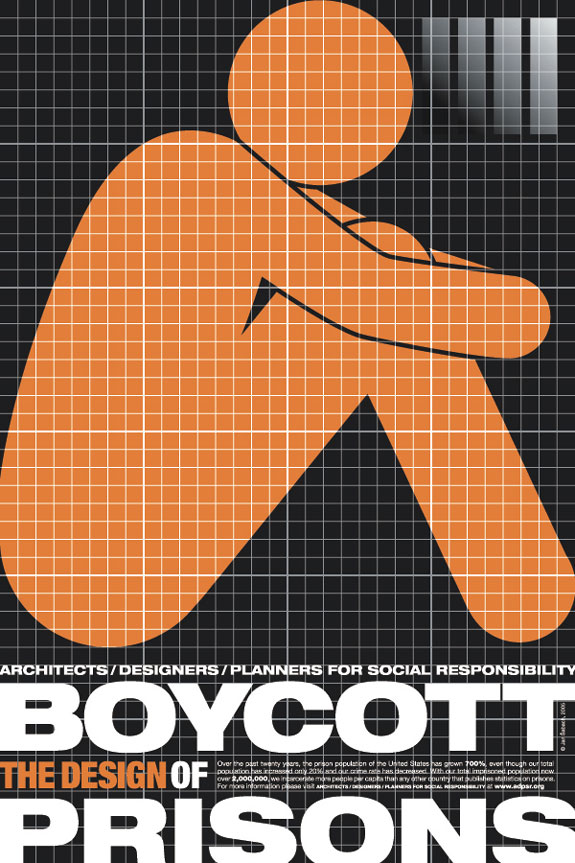 What kind of advice would you give an architect interested in a particular just cause that may challenge the basic assumptions of his or her practice?

After getting interested in architecture as a kid because I liked tall buildings, I grew to see making buildings as a way to make the world a better place, and I think that the large majority of architects also got into the profession in order to improve the world — not primarily for themselves, but for others. We want to make the world more beautiful, make it work better, design spaces that make people happy, or excited, or intrigued.

Certainly, in professional practice, there’s a tendency to lose track of the initial spark that drew us to the profession and fall into a routine of designing similar projects for a familiar client type without thinking too deeply about it. It’s hard to make any money in the profession without a certain amount of repetition and standardization. So when a project comes along that challenges your values (or your “just cause”), that would be a good time to reconnect with the reasons you got into your profession in the first place.

Important moments of reflection can come from this kind of mini-crisis — when a specific project forces you to ask yourself if doing this kind of project is part of why you became an architect in the first place or not. And this mini-crisis is also an opportunity. If you are going to turn away from certain projects that do not fit with your vision of yourself in your practice, how can you take the energy in that decision and steer yourself towards the work you feel drawn to? While I hope this doesn’t sound grandiose, I would urge this architect to stick with her principles — abandoning her integrity will lead to a larger failure down the road. 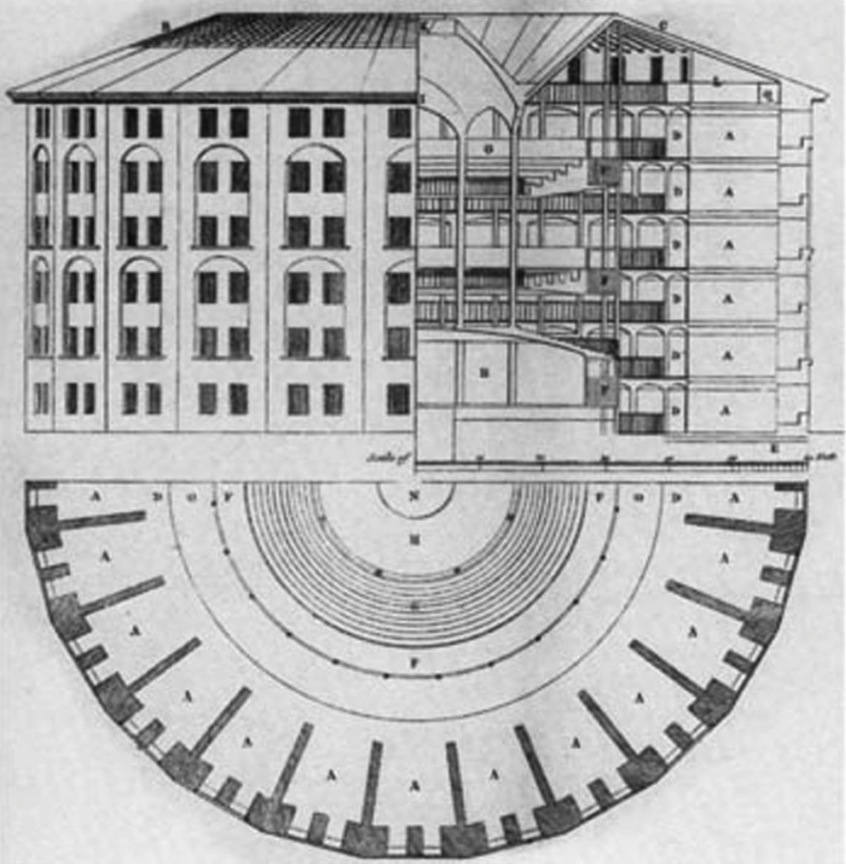 How do you manage your professional life as an architect and as an activist? Do you see them as different or as extensions of each other?

There is a specific way that my professional life and my activism fit together, which is in the re-expansion of the idea of “sustainability” to its original meaning. My professional practice is as a green building consultant, helping other architects and building owners find good environmental strategies for their projects, and especially in implementing the LEED rating system. But “sustainability” as it was originally conceived was composed of three spheres: economy, environment and social equity. The building industry is very familiar with economy, and through efforts like USGBC, Architecture 2030, AIA COTE and others, we have made huge progress in addressing the environment. Social equity lags far behind in how it is addressed by our profession, outside of the affordable housing sector. So in one way I see my activism as one attempt — among a number in my generation I would add — to build the tools we need to address social equity in order to fully reach sustainability. And sustainability, of course, is essential to protecting the future of human life on planet earth.

My activism is deeply tied to my identity as an architect. I engage in activism as part of trying to make the world a better place, which is the same urge that got me interested in designing buildings. I’ve found that the design and analytical skills I learned in architecture school and professional practice have helped me see more clearly into issues of inequality, injustice and how policy decisions lead to certain outcomes. Our society needs to redesign our justice system, not only in terms of its physical facilities but also in its policies and practices, and even perhaps in its basic values. We cannot just leave that up to prosecutors, judges and law enforcement experts — they have gotten us to where we are today.

Architects as activists have a lot to add to public policy discussions — including those on the justice system — and not only because we are well-educated citizens. We are entrusted with designing the public realm and the built environment for the public “health, safety and welfare,” and so we must take stock when key components of the public realm are failing. Obviously, this is a task far beyond the design of buildings, but I’ve found that it’s possible for architects to advocate for systemic change through organizing and speaking out — and on the issue of the prison system and alternatives to it, primarily through ADPSR. I would welcome your readers to participate in our activism.