India and Africa in the Media 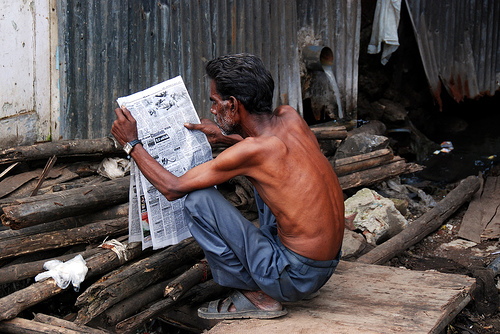 Last month, we invited you to share the "best" and "worst" examples of media coverage of cities in Asia, Africa and Latin America — the so-called "Global South" — via Twitter (#visiblecities).

Here are two articles readers submitted as examples of reporting to aspire to — both on informal settlements in India:

Do you think these articles do a good job of portraying urban poverty in India? Comment and share other articles below or at #visiblecities.

Last month, several reports pointed to the need for improved coverage of Africa in the international media and how social media can change the landscape. Afua Hirsch, the Guardian's west Africa correspondent, lamented the lack of specialist African coverage in mainstream media, noting that "there is a laziness applied to media coverage of Africa that is seldom seen elsewhere." However, social networking is changing the scene. When CNN painted a single grenade attack in Nairobi as a wave of violence, Twitter users in Kenya pointed out the sensationalism at "#SomeoneTellCNN." CNN "was eventually pressured into something closely resembling an apology," according to Hirsch.

In a BBC article last month, Kenyan author and journalist Binyavanga Wainaina argued that if Africa conformed to media stereotypes, it "would be a country. Its largest province would be Somalia."

The way forward? "We can get online now and completely bypass their nonsense."

And a few days ago, on CNN, Christiane Amanpour spotlighted one attempt to fight Hollywood stereotypes of African men.

We'll be discussing these issues and more at a multidisciplinary panel discussion on "Visible Cities: International Media Portrayals of the Cities in the Global South," sponsored by Urban@LSE, on the evening of May 16. I am co-organizing the event with Carrie Baptist, a colleague at the London School of Economics and Political Science. The event will bring together urban geographers, media scholars, and practicing journalists and editors, with diverse geographic perspectives, to critically examine the ways in which cities in developing countries are currently portrayed and consider alternatives. We'll post a video of the event on Polis afterward. In the meantime, you can follow and join the conversation at #visiblecities.