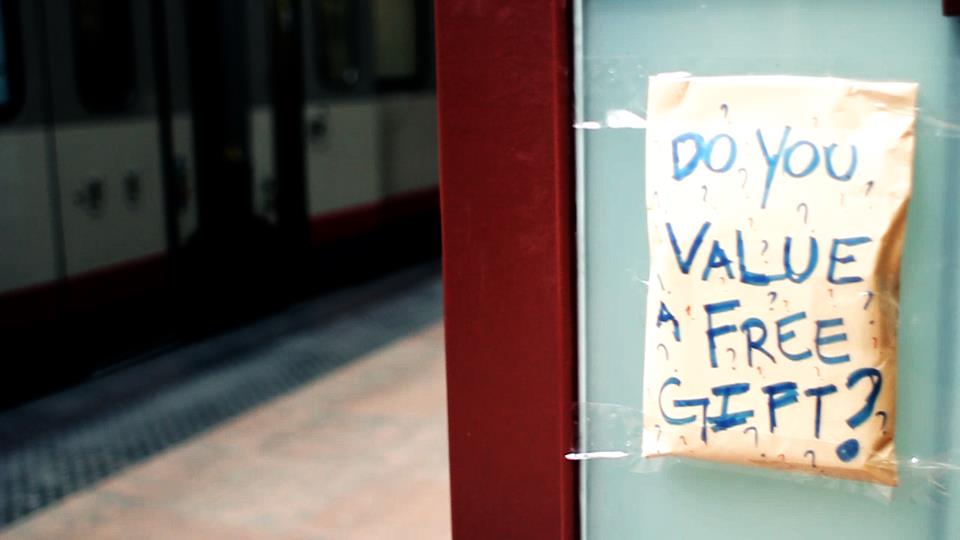 This parcel at Antwerp Central Station is one of many that the band Psy'Aviah has been placing around the city this spring. Source: Psy'Aviah

In recent years, the Internet and social networking sites have brought new meaning to the notion of sharing. Much is given away for free, and we now share everything from information to interesting projects, pictures from vacations, favorite songs and videos. In the city where I live, Antwerp, Belgium, young musicians are bringing this sharing ethos into the physical world, tapping into an age-old desire to give time and energy toward a common good.

Over the past two months, the electro-rock band Psy'Aviah has been spreading parcels around the city, with cryptic messages scrawled on the covers. Inside there is a CD of their music, along with a thank-you note. Some of the parcels are taped to walls, some hang on string. The idea behind the project is simple: Wake people up from their daily routines and thank those who take the risk of looking inside and possibly sampling the music. The band has been documenting their guerrilla project on film.

Yves Schelpe of Psy'Aviah explains the motivation behind the project:


Life is over in no time, and things can quickly turn into a colorless routine. With this project we want to add something unexpected and exciting to people's daily lives. One inspiration is an experiment by the illusionist Derren Brown. He tested whether people who felt happy actually had more fortunate circumstances in their lives. They actually seized more opportunities to be happy, showing more awareness of the potential around them, regardless of circumstances.

Looking more closely at the band itself, it seems that experimentation is in their genes. Active since 2007, Psy'Aviah — Schelpe and vocalist Emélie Nicolaï — describe themselves as an open-minded electronic music band with energy and soul. They have a diverse back catalog, ranging from electro-pop to electronic body music to ambient music. Their videos are self-produced, and they have a growing reputation for unconventional DIY acts.

One could argue that musicians have been giving away samples for years, and that the parcels are nothing more than self-promotion disguised as altruism. Still, Psy'Aviah has put real effort into giving something to the world for free. Of course they hope people will enjoy the music and become fans, but that shouldn't detract from this alternative to the commercialism that dominates urban environments today. Their project represents sharing at its core: giving something valuable to generate shared value.

Jan De Decker is an entrepreneur and new-media specialist based in Antwerp.