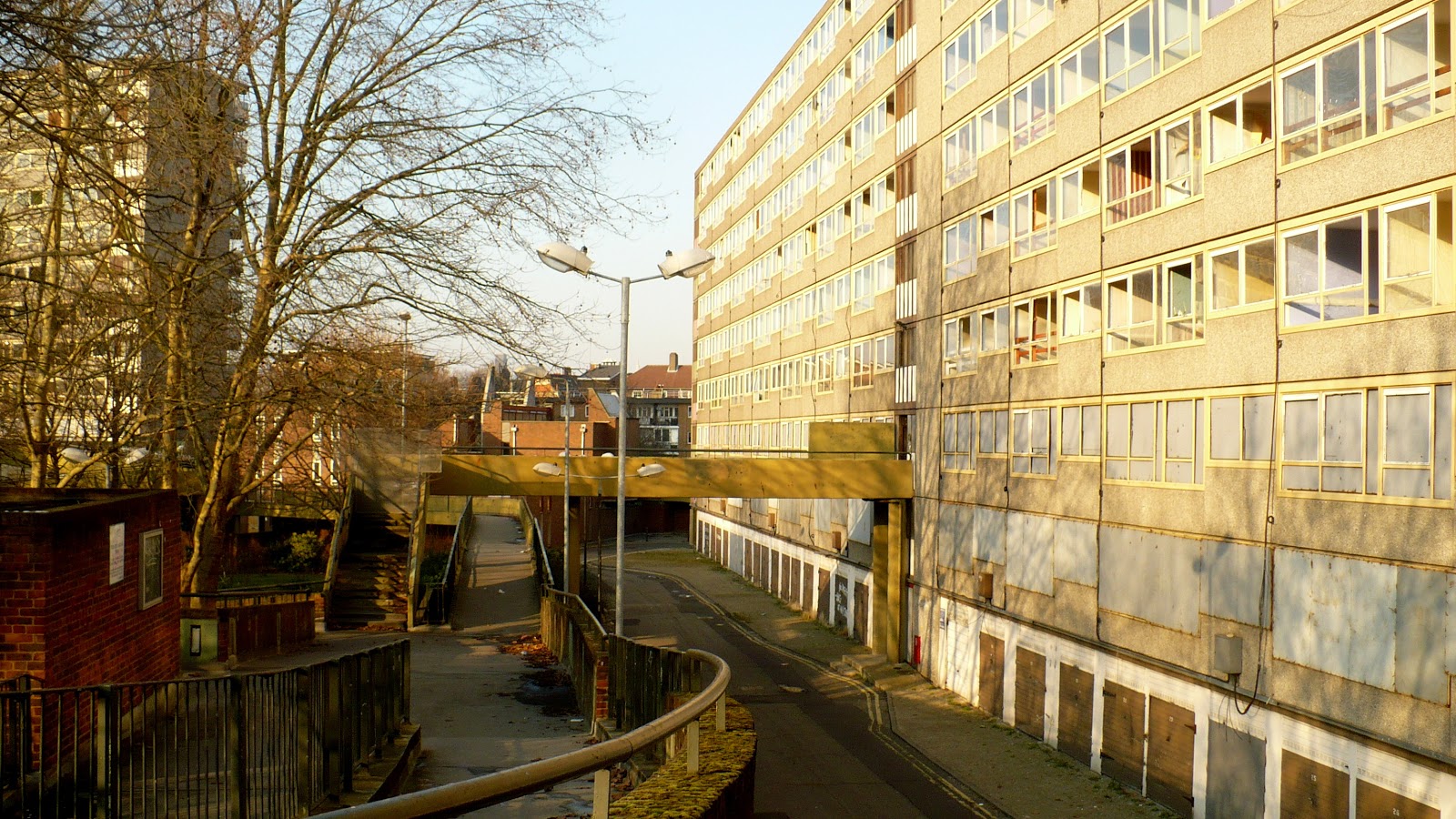 In the words of its most passionate biographer Peter Ackroyd, London is never silent. Even in its hushed hours, the city “teems” with the very present absence of people or business. This teeming silence can be felt and heard most acutely at the condemned Heygate Estate in Southwark.

Designed in 1960 by architect Tim Tinker in the “Brutalist” style and completed by the Southwark council in 1974, the Heygate Estate had been hailed as one of many successful designs in modern public housing architecture. The council’s website describes the estate as the embodiment of a “brave new world dream” of the post-war welfare state. 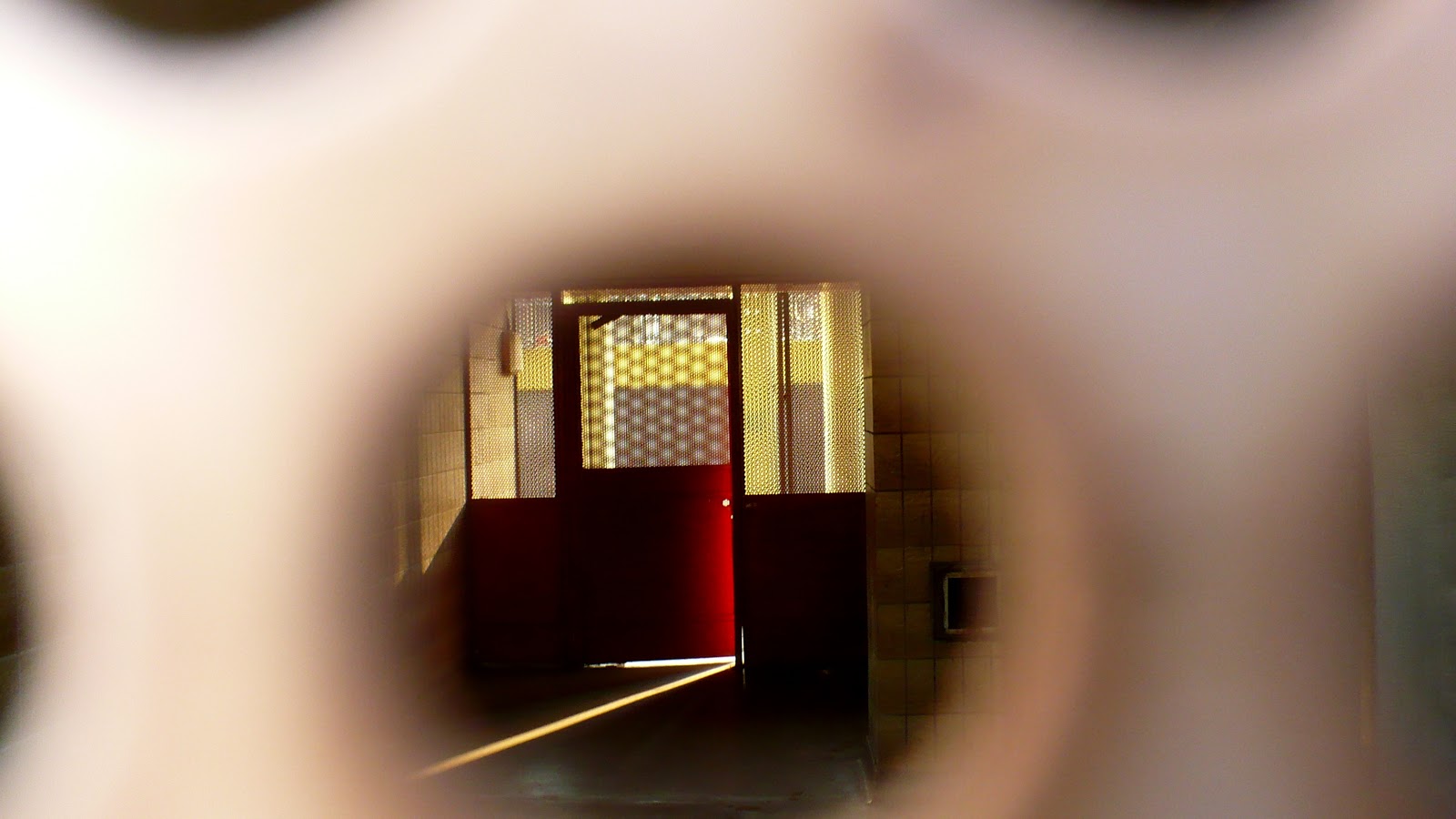 Built to house 1,260 households a mere 40 years ago, the Heygate has been awaiting demolition since 2008, when the council began “decanting” its 3,000 residents as part of a regeneration project in the Elephant and Castle neighborhood. Council authorities claim that the estate had become too expensive to maintain and heat during the winter. No longer “an ideal place for people to live compared with standards that are expected today,” buildings that until recently bustled with activity have been condemned to erasure, to be replaced with much-contested middle-class housing and offices.

The Heygate, together with the Robin Hood Gardens estate in East London, are only the most recent victims of ongoing gentrification in London. By portraying the estate as failed utopia, the Southwark Council can appeal to a common narrative about the death of Modernism, most famously illustrated by the demolition of St. Louis's Pruitt-Igoe housing project in the mid-1970s. What was initially a plan for communal living that provided a social hub for residents meant to eventually move up the social ladder becomes a representation of a gritty, crime-ridden reality of chronic poverty and social disenfranchisement. 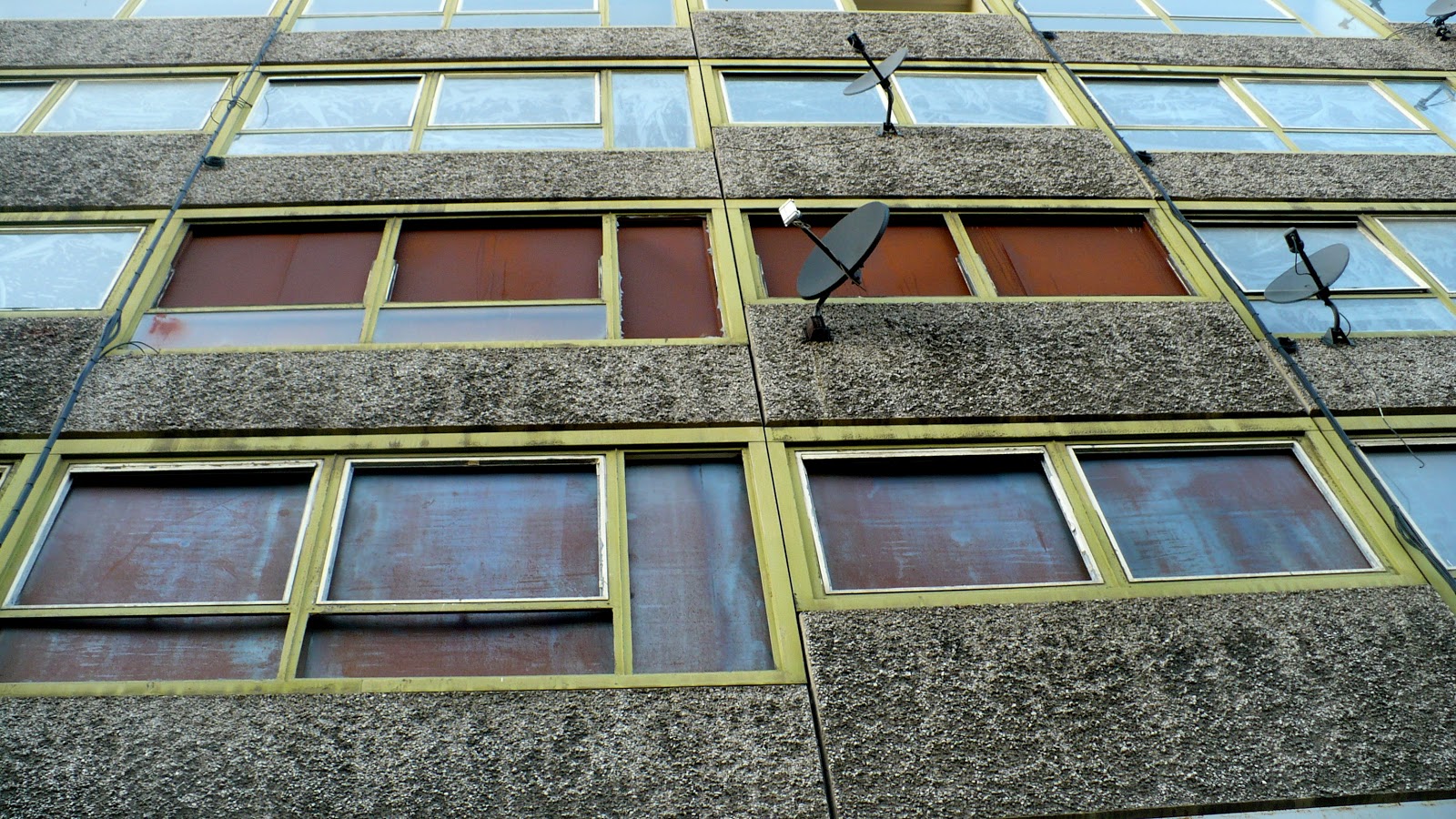 As the Heygate awaits dismantling, measures have been put in place to prevent access to the empty units. For the most part, windows and doors have been boarded up with metal panes that give the estate an eerie, uncanny look of early decrepitude and blindness. Last February, the Southwark Council announced on its website that the walkways — some as high as 20 feet — linking the estate's buildings will be “closed before the end of March to allow the next phase of the estate's demolition process to commence.”

Once again appealing to the trope of failed utopia, the council claims to have learned much since the heady days of the 1960s. Stairwells and alleys “in fact turned to dark spaces which encouraged crime and antisocial behaviour.” As to the “aspirational walkways in the sky” designed to hover above the car traffic, the council concludes that they were simply too awkward to use, as “pedestrians were tempted to avoid them in favour of walking on dangerous verges by the road." On my most recent visit to the site on April 5, there were no signs that the council had taken any steps toward closing the walkways or made efforts towards opening a replacement pathway “on the ground” that will afford potential pedestrians a much safer, “welcoming environment to walk from one location to another.” 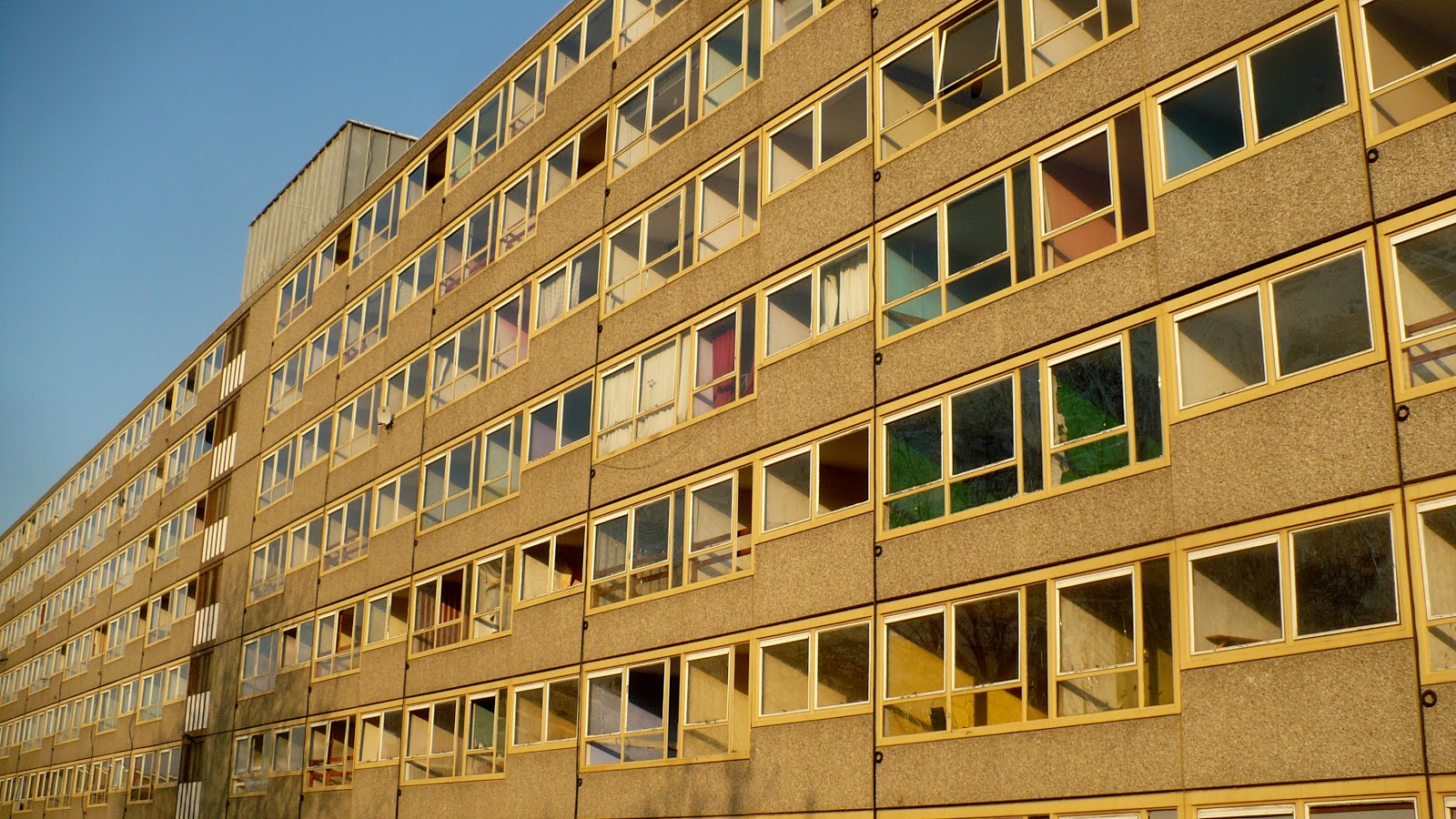 Cities constantly use various mechanisms to regulate movement through space, be it of cars or humans. In his multimedia project that explores industrial ruins in Britain, Tim Edensor points out that cities encourage "perpetual movement," while begging, loitering or other unconventional forms of using urban space tend to be policed.

Thanks to the slow-paced demolition schedule at the Heygate Estate, however, various groups have come to claim different parts of the estate for their own uses and subvert the council’s agenda for now. A guerilla gardening group, perhaps mockingly named the Heygate Regeneration Scheme, is using plots adjacent to low-rises at the center of the estate for growing vegetables in neat rows. The gardeners are also part of a group fighting to protect the Heygate Urban Forest. Young people from the neighborhood creatively use ramps and walkways for parkour or cycling, and during recent sunny days, small groups improvised barbecues on the central lawn as tourists timidly explored the estate, expensive cameras in tow. Every Sunday, Ghanaians pour into the United Reformed Church that holds mass in a small annex at the Northeastern corner of the estate. 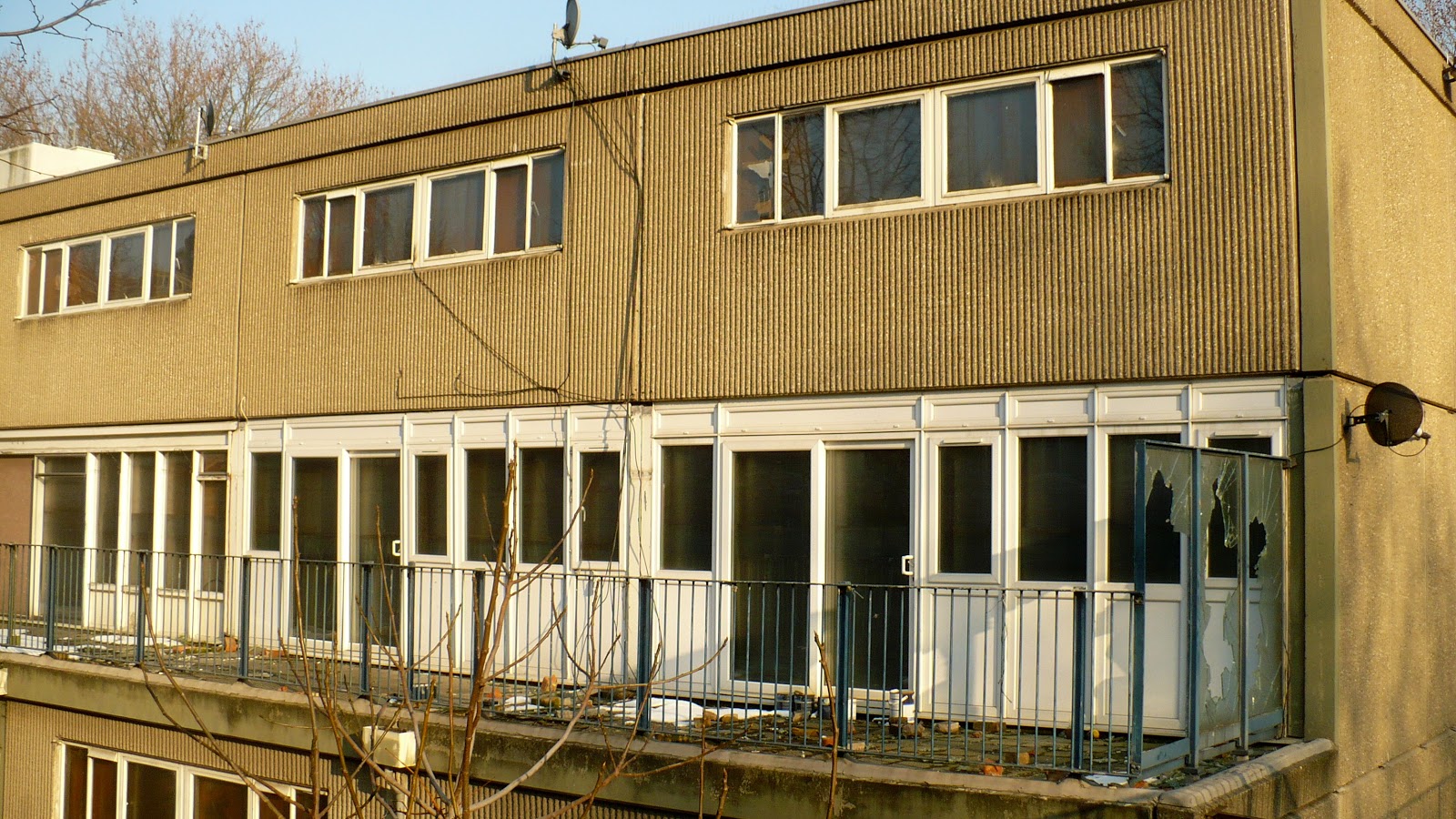 As such, the site could not be more misrepresented in the words of a Guardian journalist who claimed “there are no human sounds or traces of life left at Heygate.” One does not have to listen too hard to hear the teeming silence of 3,000 relocated residents, or the resounding presence of resistance at the Heygate.

I recently compiled a sound recording (embedded below) of my visits and explorations of the Heygate Estate, part of my contribution to an ongoing project to create a vast sound-map of London. I used the vilified walkways, and my route was determined by the “stop-go” character of walking through unregulated, decrepit space. My recording practice was one of playful meandering, gleaning sounds along the route that were inevitably filtered through my subjective inclinations and attentiveness as a listener. The resulting piece is layered in a way meant to reflect the fragmentary experience of walking along obstructed paths, climbing over rubble, or stopping to listen as church sounds blended with bird song. It is an acoustic record of a space that speaks back to official discourses about marginalized, criminalized urban space and seamless, positive regeneration processes.

As London faces increased privatization and commercialization of public spaces, as well as the sale and eviction of social housing, one wonders wether there will be room left for the type of alternative urban practices encountered in the liminal space of the Heygate Estate.

Cristiana Strava is a PhD student in the Anthropology of Architecture at the School of Oriental and African Studies in London. In her previous life, she studied Anthropology and Visual and Environmental Studies at Harvard, but her fascination with the built environment dates back to a Romanian childhood spent in drab communist housing.