Parting Shot: A New Mural in the Old Neighborhood

Last week, after four months living in the Bay Area, I returned to the apartment in Chicago's Pilsen neighborhood that I called home for the past four years. I’d been gone just long enough to lose my everyday familiarity, but not long enough for nostalgia to kick in.

Everything was in place: the still-new paint on the bank parking lot near the back alley, the fifth (or was it sixth?) taco restaurant to open in the storefront across the street during my time there, the stray cat I named "Funf" observing me from a distance as I removed my old couch. But the colors seemed more saturated than before. I noticed several new murals painted while I was away. 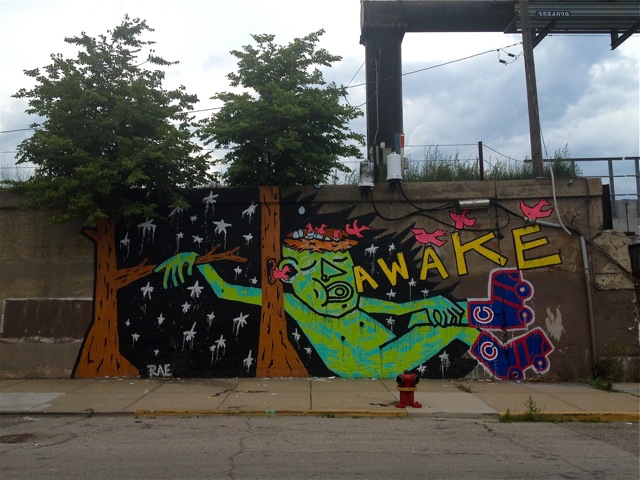 I was drawn to an especially colorful painting along the wall of the Metra tracks on 16th and Ashland. Painted in bold jagged strokes, a reclining green figure reached between two tree trunks that extended toward real trees peeking from behind the wall. Although the figure appeared to be sleeping, the word "AWAKE" boldly unfurled from his lips. I later learned that the piece was created by Brooklyn artist RAE as part of an ongoing mural project organized by Pawn Works Gallery, the Alderman’s Office, the National Museum of Mexican Art and The Chicago Urban Art Society.

I'm planning future visits to my old neighborhood, where new murals enhance the colors of their surroundings, leaving their impression like a gift in parting.