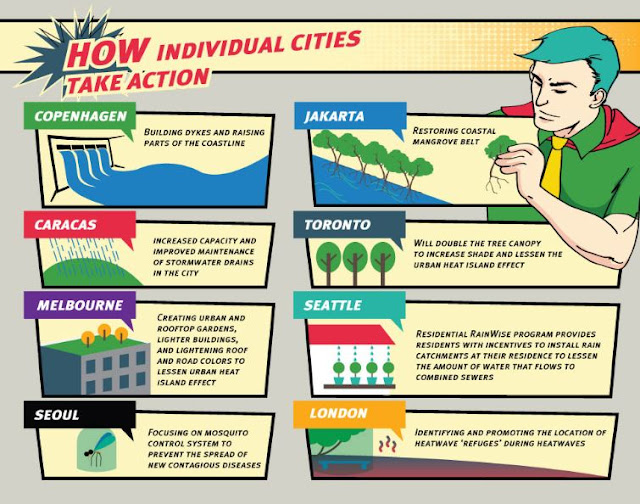 Summertime in the northern hemisphere has prompted a resurgence of media coverage on climate change, with particularly frightening articles from Rolling Stone and The New York Times. BBC Future has crafted a compelling infographic on global consumption of non-renewable resources, made all the more breathtakingly tragic by pinpointing the projected years when fossil fuels, minerals and rainforests will vanish entirely.

With ever-accumulating data on anthropogenic climate change comes a focus on cities and the processes they drive across the globe. The Carbon Disclosure Project (CDP) now has a program on cities, acting as a voluntary climate change reporting platform for city governments. So far the CDP has gathered and presented data from 73 cities worldwide. This makes for a more optimistic reading, with accounts of not only emissions and vulnerabilities, but also adaptation measures and opportunities to increase operational efficiencies and promote resilient infrastructure. While revealing only slight variation between cities, the impacts of wealth, population and density on emissions are evident, opening the door for dialog on urban inequality and environmental quality.

Because the data is not demanded, but voluntarily submitted, a proactive tone is set for cities to compare ideas on mitigation and adaption to climate change. Importantly, city mayors have demonstrated a will to recognize problems, prompting the World Bank to provide a way forward with access to funding for projects to temper the effects of climate change.

Longstanding inter-country comparisons on emissions have proven useful to gauge trends and drive policy discussions. Let's hope that the Carbon Disclosure Project ushers in an era in which cities and city governments do the same.