Semiotics of Sticker Art in Providence

If you wander around Providence and pay close attention to tarnished street signs, dusty corners and dilapidated doors, you can occasionally find a small black-and-white square with a message from the past: Andre the Giant Has a Posse. The discovery of one of these old and faded stickers invariably sends a thrill down my spine. I have stumbled upon a secret, a special heritage, an ancient symbol of the city I now love. Some do not know, some have forgotten, but I, I remember.

Of course, the stickers are not secrets at all, but manifestations of a well-documented event in artistic history. In 1989, Rhode Island School of Design student Shepard Fairey printed the stickers and distributed them to the local skater community, who quietly stuck them all over Providence, sparking their eventual appearance in cities all over the world. Andre the Giant Has a Posse went viral before the Internet did, foretelling the rise of the image-with-caption meme. Crisp up the grainy ink-on-vinyl image a bit, and you can even imagine that Andre the Giant is a character in a rage comic.

Fairey’s second Andre sticker, a close-up of the giant’s brow printed on a red or white background with the slogan “OBEY,” blew up a hundred times greater than the first. Like Andre the Giant Has a Posse, OBEY GIANT was adopted by skaters and spread, slowly seeping into the mainstream. Today OBEY supports a department-store assortment of merchandise. OBEY stickers are easy to find in Providence and, I suspect, are still stuck up fairly often. 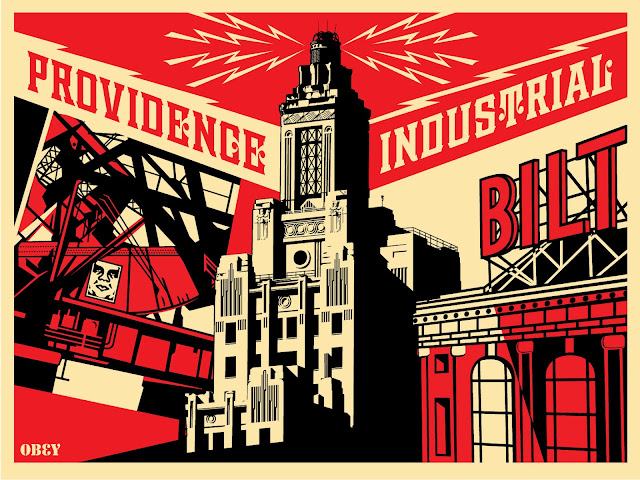 This mural by Shepard Fairey has become an unofficial symbol of Providence. Source: AS220

Fairey’s career flourished with his sticker campaigns, and his art has became Providence’s brand. Several local businesses have adopted his bold red-and-black palette, and the mural he designed for the back wall of local arts nonprofit AS220 symbolizes the city in the eyes of many residents, myself included. While not all Providence residents know the story of Andre the Giant Has a Posse, I’m confident that nearly everyone in the city can recognize Fairey’s art.

The transition of Fairey’s illustrations from counterculture to mainstream exemplifies the evolution of sticker art at large. For street artists, stickers function much like graffiti tags, requiring more preparation beforehand but less time when it comes time to do the sticker “bombing.” 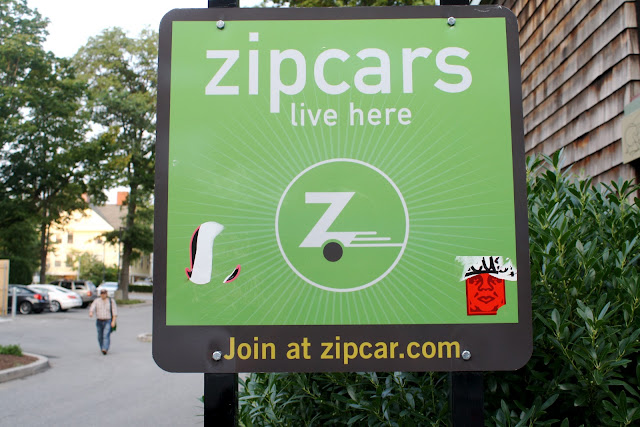 A recently (within the past few years) bombed OBEY GIANT sticker.

When Fairey was a student, stickers were big in the punk scene, used for decoration, promotion or to convey a political message. (An essay by Fairey on sticker art can be found here.) And, like every other type of street art, stickers are now used as advertising by commercial vendors. The street signs in Providence are still covered, but 90 percent of them carry logos for smoke shops or vegetarian restaurants, list the lineups at local venues or peddle some other sort of product likely to appeal to the demographic who reads stickers on street signs. 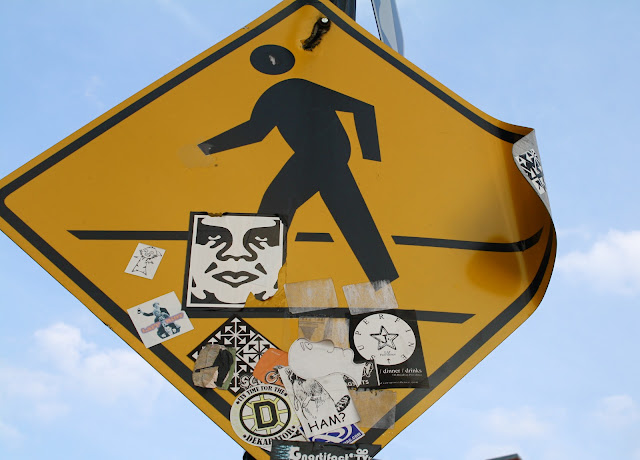 IDEO, the international design firm that Fortune 500 companies and national governments turn to when they need an unconventional solution to a pie-in-the-sky problem, was once hired to help encourage democratic participation in Peru. The team of designers handed out “Fix This!” (“Arregla Esto!”) stickers to citizens of Cuzco and told them to stick them on anything they thought was broken. In very little time, the stickers piled up on surfaces throughout the city, including government buildings, police cars and school doors. The appeal of “sticking it to the man” was irresistible.

I find the many ways to "stick it" fascinating and somewhat amusing. Stripped to its essence, sticker bombing is not much different from scent marking. See this pole here? This is MY POLE. But sticking it is also a richly symbolic form of communication. A few square inches are enough to carry an image or a phrase that can encourage action or create a sense of cultural belonging that lasts long after the person who posted the sticker moves on.