Creative Recycling and Storytelling in Dharavi

People living in extreme poverty tend to be innovative and provident by necessity, finding ways to survive with available resources. Massive informal settlements like Dharavi, in Mumbai, are full of creative entrepreneurs with little choice but to "reduce, reuse and recycle." Dharavi Diary is fusing entrepreneurship and storytelling in Dharavi to expand the capacity of residents to make a living from their creativity.

People migrate to Dharavi from all over India to work in diverse industrial enterprises that capitalize on cheap labor and virtual lack of regulation, producing a combined economic output valued at over $1 billion per year. The most prominent of these industries is recycling, which collects and reuses an estimated 80 percent of Mumbai's plastic waste in 15,000 one-room factories and employs over 250,000 people. 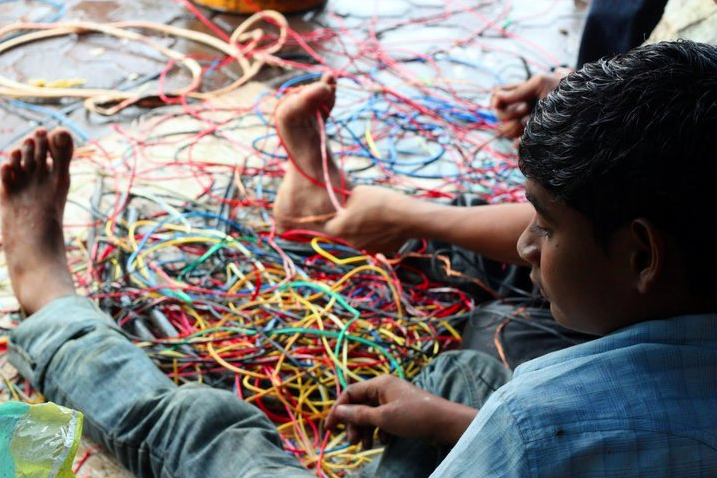 While the recycling industry has brought some prosperity to Dharavi, the people who labor in the workshops still live in poverty. Toiling around the clock, they sort through mountains of plastics, car batteries, wires, paper, tiles, computer parts, fluorescent lights, pens and other items, often in dangerous conditions.

Guddu, a 17-year-old Dharavi resident, left school and started sorting syringes when he was seven. His job was to pull the syringes apart, tossing the plastic tubes into one pile, and the needles into another. Gloves? Of course not.

Despite hardship, people in Dharavi are tenacious, enthusiastic and creative in ways that many affluent people aren't. They've improved their community over time without much support and despite many obstacles from the municipal government. Jugaad — the practice of creatively using accessible resources to build or improve needed items — is a way of life in Dharavi. We call it slum innovation.

To support creative entrepreneurship in Dharavi, we're building a recycling design school here where people will learn to make and sell their own designs. The idea may seem far-fetched, but it's actually logical because it draws upon skills and resources already present in the community. The curriculum can be adapted to each person's interest — from architecture to electronics and beyond. It is based on interdisciplinary collaboration and practical training that will help sorters raise their incomes and keep their children in formal education. We hope that it will also promote learning through projects that improve living conditions in Dharavi and around the world. The school will produce D.I.Y. design kits to share with people in other informal settlements, so they may develop their skills and innovate their way out of poverty.

Dharavi Diary's participatory storytelling projects help raise awareness about the lives of Dharavi residents by making technology accessible for them to tell their stories. The results will be added to a virtual tour of the community on the Dharavi Diary website. Last year we made a short documentary (see trailer below) with a group of recycling workers. It is screening at film festivals like Nat Geo and Raindance in 2013.

We're currently shooting a feature documentary that follows the struggles and triumphs of the design school and its students. We also share stories directly from Dharavi residents on Cowbird. These stories help people around the world see the desperation of slum dwellers as tenacity and enthusiasm to make a better life.

Laxmi (above) is one of the people who have shared their stories. After her divorce, she was given strict training in running a recycling workshop by her mother, who then told her to go and start her own operations. Laxmi managed to do this with impressive results. She and her collective also help run Dharavi Diary on site with guidance from our founder, Nawneet Ranjan, and other members of the team.

Dharavi Diary is running a crowd-funding campaign on Indiegogo, where you can make a donation and receive products handcrafted from recycled materials in return. These eco-friendly items make great holiday gifts for friends and family. If you would like to participate or stay informed, please join us on Facebook or contact us any time!

Jordan Bryon co-designs empowerment strategies with communities on the fringes, fusing local knowledge, storytelling and technology to help people help themselves. Jordan can be reached directly via jordan@dharavidiary.com.