Ending Assault on Women in Delhi and Beyond 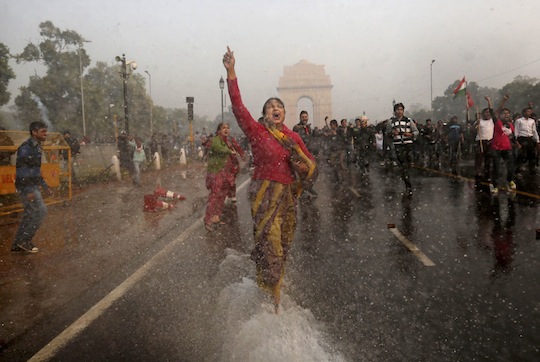 Women and men throughout India have been taking to the streets to express outrage at the savage gang rape and torture of a 23-year-old woman in New Delhi on Dec. 16, which precipitated her death before the year's end.

This case has sparked public debate on confronting a history of sexual harassment and violence that plagues many Indian cities. As reported in the New York Times: "'That girl could have been any one of us,' said Sangeetha Saini, 44, who took her two teenage daughters to a candle-filled demonstration on Sunday in Delhi. Women in India 'face harassment in public spaces, streets, on buses,' she said."

The demonstrations in India open questions that resonate worldwide. Jasmeen Patheja sums up the challenges for cities:


Our cities will be safer when we acknowledge women as citizens. We must ask, 'Whose city?' Can we imagine a city of women? A city for women? We need to start looking at/designing/building the city as a place of women instead of focusing on protecting women — without perpetuating victimhood...

We, as women, are brought up around warnings: be careful; don't attract attention to yourself. We are taught to have a fear-based relationship with our city. Public places are not for leisure and pleasure. In my ideal city I want to be in a park and take a nap without feeling threatened. Sometimes we just love to sit, stand, walk and talk without looking available. What makes a group of boys play football on a field and not girls?

Patheja's questions evoke the shared experiences of women in many cities. In my hometown of Kuala Lumpur, malls have begun to designate "ladies only" safe zones in their sprawling underground parking garages, locating them close to entry and exit points for quick access. Local radio stations run public service announcements from time to time urging women to be alert and stay safe. In some cities, these urban design interventions are hardly new efforts — women-only subway cars were introduced in Tokyo nearly a decade ago to counter rising incidents of groping.


Change is possible, but the police must document reports of rape and sexual assault, and investigations and court cases have to be fast-tracked and not left to linger for years. Of the more than 600 rape cases reported in Delhi in 2012, only one led to a conviction. If victims believe they will receive justice, they will be more willing to speak up. If potential rapists fear the consequences of their actions, they will not pluck women off the streets with impunity.

Government intervention, redesign of public space and services, and effective law enforcement are certainly needed. But are they sufficient? Mitra Kalita links the assailment of women to the limitations of top-down intervention: "How will the government stop all that inappropriate touch that happens on its city buses every day? Or those hands that enter the sides of a rickshaw to just feel around? Or all those whistles and catcalls?"

As one protest placard from the Delhi protests reads, "We live in a society that teaches women not to get raped, instead of teaching men not to rape."

Fully addressing this problem may require a widespread change in consciousness. How does local culture — as honed at the grassroots level within families and communities — instill respect for women? How does the education system support this value? How does the powerful language of popular media, transcending barriers of literacy, portray women and promote gender equality? In our best efforts, women cannot be treated merely as concepts — we are mothers, grandmothers, cousins, sisters, daughters, friends and neighbors.

In many ways, India's public discourse following the tragedy is a moving testament to civil society and a breathtaking expression of the world's largest democracy at work. Let's hope it doesn't stop there.