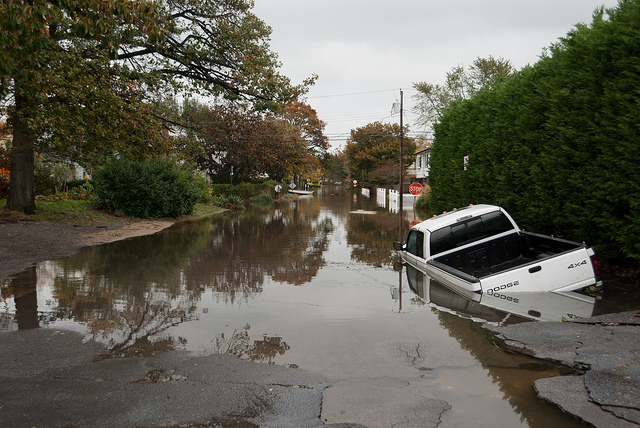 From the torn-up boardwalk of Atlantic City to New York's water-logged subway system, cities are paying the price of Hurricane Sandy in dollars and disrupted lives.

With more extreme weather expected in the years ahead, the question of cost becomes more acute. Who will write the checks for repairs necessitated by wind, floods and droughts? And who will pay for measures to reduce greenhouse gas emissions, build dikes and levies, and sequester the greenhouse gases already in the atmosphere?

The federal government is debating whether to pick up the tab for Sandy, and its response has been slow. As destructive storms become more common, federal assistance could become more difficult to obtain. The focus in Washington is on deficits and belt-tightening, not expanded relief programs.

As the saying goes, necessity is the mother of invention. If urban areas must bear increasingly heavy economic burdens, the solutions may come from an unexpected source: the cities themselves.

In the face of economic hardship, local currencies are springing up in cities from Bristol to Boston and beyond. These currency systems, if developed fully, could prove vital in empowering cities to respond to climate change and meet ongoing needs.

At their core, most complementary currencies amount to "buy local" programs that encourage residents to purchase goods and services within their own communities. It's a great way to support small businesses, especially independently owned ones. They are akin to "coupons" purchased with official currency and redeemable for goods in participating stores.

But a currency program can be expanded into a full-fledged local monetary and financial system that creates new currency without debt and drives responsible growth. Such a system could help urban areas manage the costs — especially local labor costs — associated with climate change action.

In our highly interconnected world, cities are dependent on products and services from far away places. In the United States, nearly half of domestic fruits, nuts and vegetables come from California, and more than half of all bank assets are held by just five companies. At the international level, one company in China produces more than half of all mobile phone batteries.

Global trade networks — industrial, financial, agricultural, energy, transportation, retail — have obvious advantages, but are also vulnerable to severe disruptions. Storms, droughts and floods in one region can create intense problems in local economies across the globe.

In a warming world, the key to building secure urban economies is resilience. Local currencies offer a promising tool; by supporting small and medium-sized businesses and expanding local supply chains, they can foster diversity and self-sufficiency — the essential components of resilience.

Well-designed monetary and financial systems at the local level carry many potential benefits. More currency enters circulation (without need for the federal government to print money), more spending stays in the community, tax revenues increase, and urban problems such as poverty and environmental damage can be addressed locally. To top it off, it's already legal; no new laws have to be passed.

The Token Exchange System is a local monetary and financial plan based on electronic currency (tokens) issued through a membership-based community benefit corporation. Members receive tokens as a portion of their wages, or from sales if they own a business. Employees might also receive raises paid in tokens. Members use a percentage of incoming tokens to provide interest-free loans to local businesses and donations to local schools, nonprofits and public services. Each member decides which businesses and groups he or she will fund.

The system is transparent and democratically controlled. It does not replace conventional financial institutions, but serves as a helpful partner. As with all local currencies, participation is completely voluntary.

The Principled Societies Project is developing the Token Exchange System as part of a comprehensive strategy explained in the recently published book "Creating Sustainable Societies: The Rebirth of Democracy and Local Economies." The next step is to create computer models that simulate the flow of tokens and dollars in a virtual local economy. These models will help explore potential scenarios and refine the system.

More information on the Token Exchange System and the Principled Societies Project — including a free PDF copy of "Creating Sustainable Societies" — can be found at PrincipledSocietiesProject.org.

John Boik is the author of "Creating Sustainable Societies," and founder of the Principled Societies Project. You can find the other stops on his current virtual book tour at Shareable (Jan. 7, 2013) and Sustainablog (Jan. 14, 2013).