Sociology of Courtyard Design: A Conversation with Petr Ivanov

Petr Ivanov is carrying out ambitious research in his Moscow neighborhood. He and a group of young volunteers have combined Web technology with social surveys to gather input from residents of four tall buildings around a woeful courtyard. The survey results will inform a redesign project aimed at improving this public space. 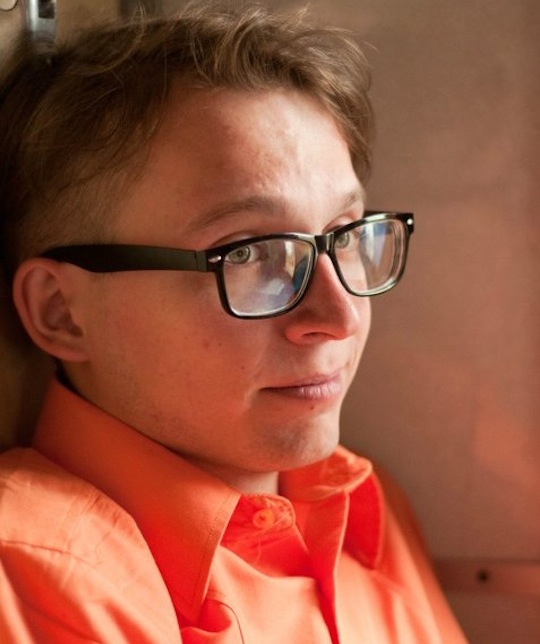 Petr's neighborhood, Troparyovo-Nikulino, is a "sleeping district" in southwest Moscow, one of many apartment-block constellations from which masses of people commute to jobs in the city center. Much of the public space in these areas is plagued with poorly regulated construction, advertisement and vandalism. In addition to quality management, there's a pressing need for attentive design that goes beyond questionable improvements by local authorities (mainly limited to colorful recreation equipment). In the following interview, Petr discusses this situation and his approach to addressing it. 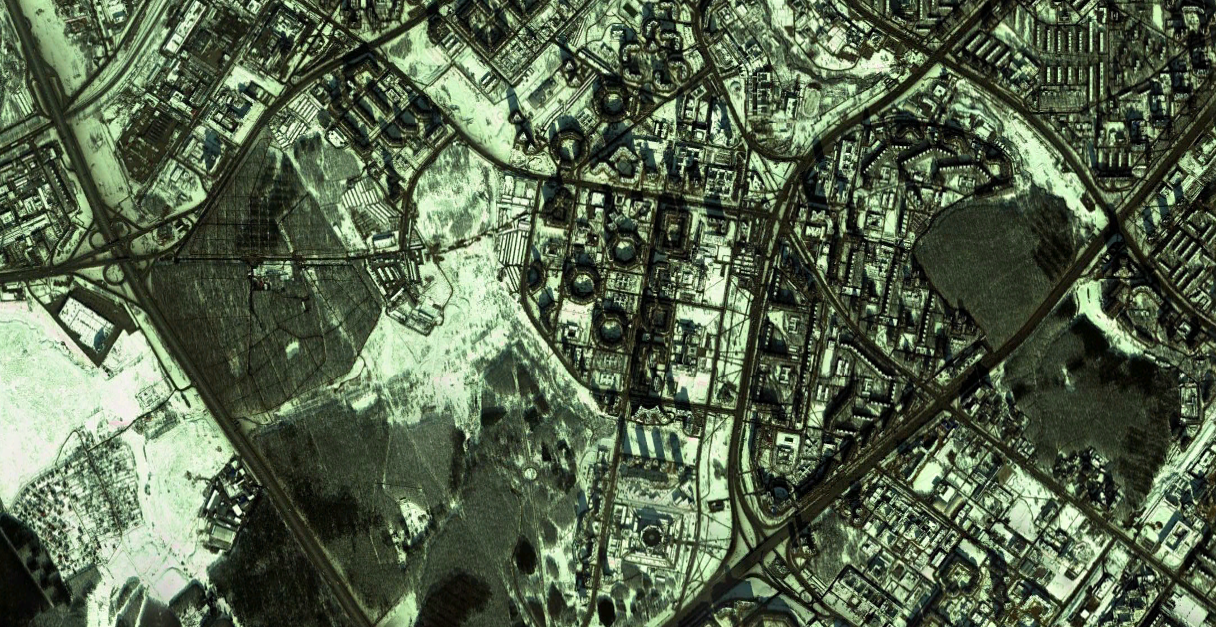 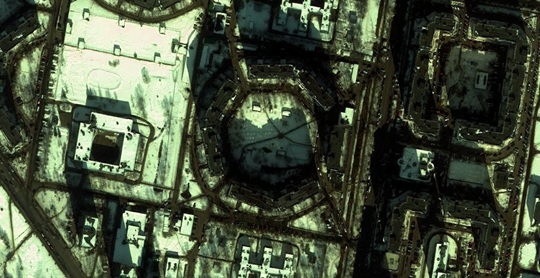 Can you tell us about your current research on public space?

The goal of our project at 38 Academic Anokhin Street is to find out what improvements people would like to see in the territory around their homes. We went door to door to talk with residents and ask them to fill out a survey; if they declined, we asked if they could fill it out at a more convenient time and place it in one of the boxes we installed in each entranceway. Along with desired improvements, the surveys asked residents about how they use the courtyard, how they think others use it and what they view as appropriate and inappropriate use. We also collected demographic and historical information to add new dimensions to our understanding of the community.

Outside the courtyard at 38 Anokhin.

What inspired you to take on this project?

While working on my master's dissertation, titled "The Courtyard in Moscow's Sleeping Districts: Geography, Practices and Perceptions," I found some interesting phenomena and methods to explore in future projects. That was the first moment of inspiration. The second came last September in discussions with Vladimir Nikolaev, my dissertation advisor in the Department of Sociology at Russia's Higher School of Economics, and Yuriy Milevskiy, an instructor in the department of urban studies. We talked about the social surveys of Charles Booth and Seebohm Rowntree in British cities around the turn of the 20th century, and how we might adopt a similar approach in Moscow. The courtyard at 38 Anokhin offered a fortunate opportunity to combine these inspirations in a real project. 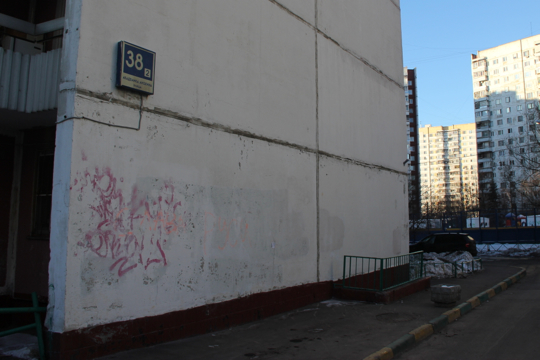 How did you select the site?

I can't say that I really selected it. Yuriy Milevskiy and I started writing a research proposal to try out social surveys at a micro scale. Around the same time, Kiril Samodurov — an activist from Troparyovo-Nikulino — mentioned the need to improve a gloomy walkway at 26 Bakinsky Komisars Street. We thought of surveying the neighbors around the walkway as part of a community-based redesign. 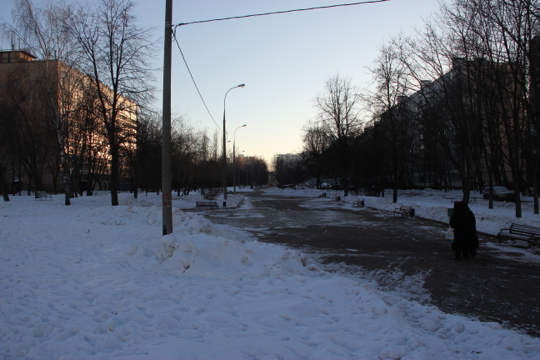 Then Gleb Vitkov — an architect who's leading a design project focused on Moscow courtyards — asked if we would conduct our survey at 38 Anokhin, not far from the walkway. He and his team were interested in finding out residents' wishes for improving the territory around the complex. 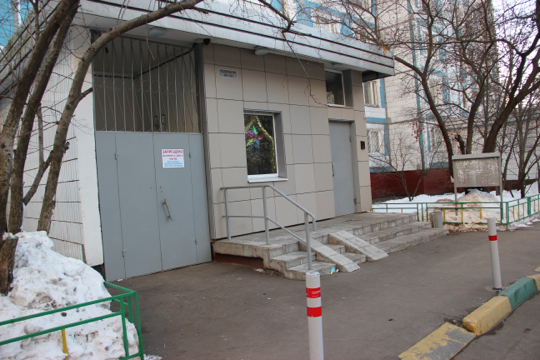 Entrance to one of the buildings that surround the courtyard at 38 Anokhin.

How did you go about collecting data?

We visited each household in the complex, drawing upon Soviet-era industrial sociology (especially "The Handbook of Sociology" edited by Gennady Osipov) in surveying as many residents as possible instead of using a predefined sample. With the submission boxes and announcements that included a QR code linked to an online version, we managed to survey about 20 percent of all residents over the month we had to complete this stage of the project. We're now organizing focus groups to discuss improvement possibilities in more detail. 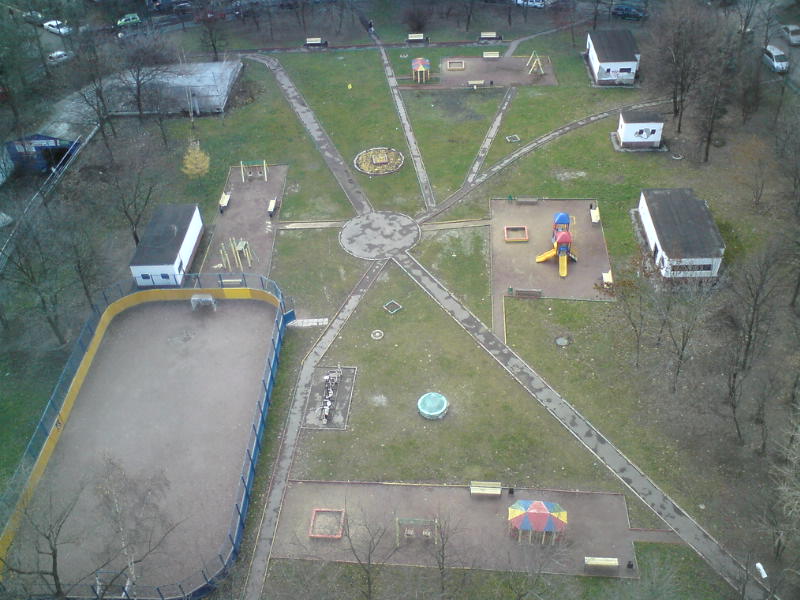 A view from above the courtyard last November. Source: Kiril Samodurov

What are some of the challenges you encountered along the way?

It probably doesn't make sense to go deeply into the organizational difficulties; it's obvious enough that there should be paper to print questionnaires, and people to help complete them. We took care of these logistics through crowd-sourcing, thanks to wonderful volunteers who really invested themselves in the project. 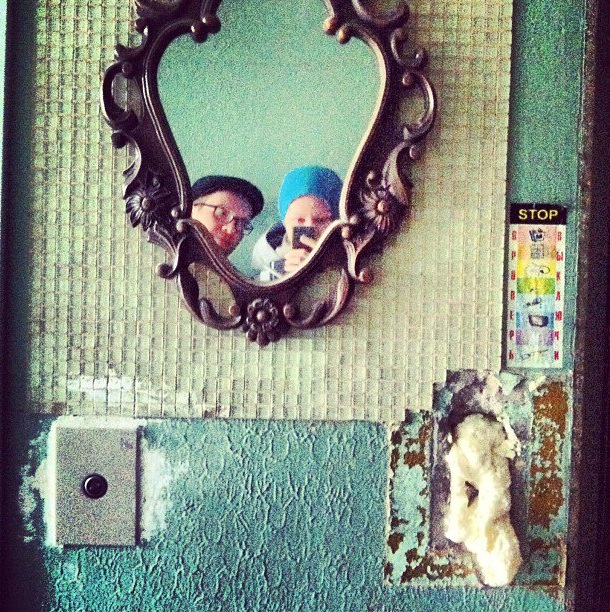 Petr and another volunteer in front of a steel door. Source: Petr Ivanov

As for research challenges, I should probably mention the full range. First is the steel door. It's difficult for me to estimate the number of refusals, because I don't know how many people came to the door, looked through the peephole and, seeing a stranger, decided not to answer. The steel door encourages suspicion. I imagine people thinking, "Did I install a steel door because of that person I see on the other side?" 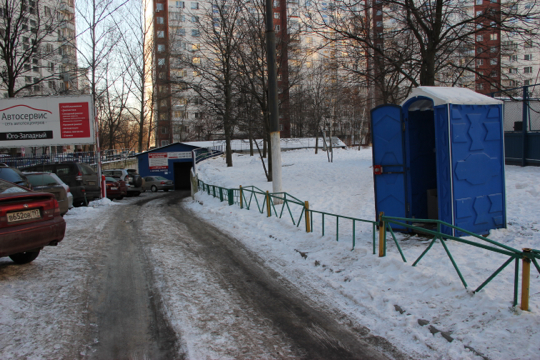 An automobile service station along the perimeter of the courtyard.

Even when people opened the door, we had to prove that we weren't selling vacuum cleaners, that we didn't want to make people believe in Jehova, that we weren't working for Putin or for the U.S. Department of State, and that we weren't trying to rob anyone. Convincing people of these things was sometimes impossible. 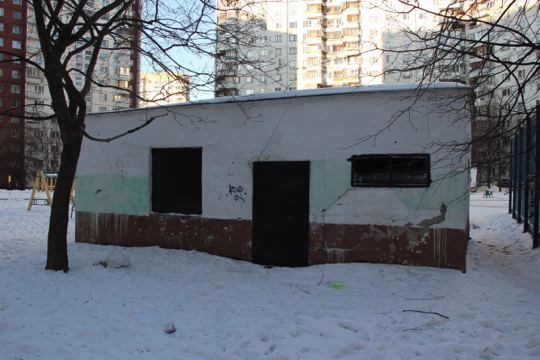 One of four run-down utility sheds on the lawn.

The third problem: prior bullshit. It turns out that two years ago employees from the State Agency of Engineering Services conducted a resident survey, but there's no indication that it was published or used in any way. So a lot of people were understandably reluctant to participate. 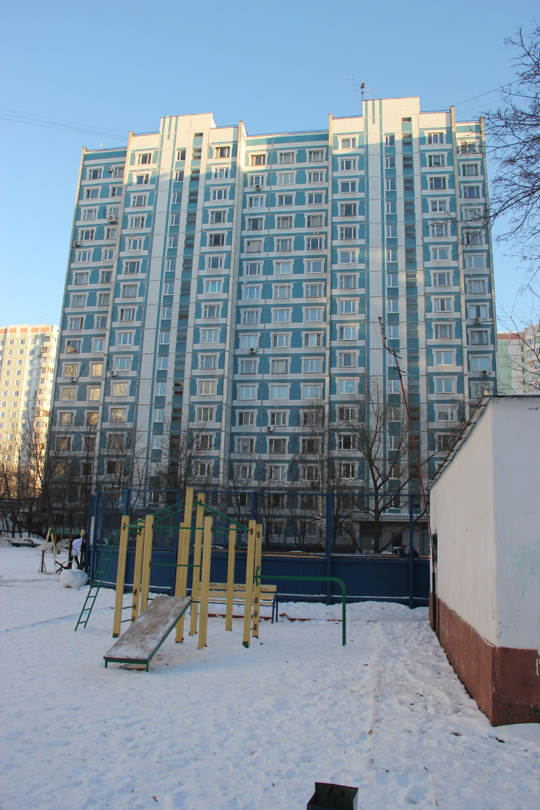 Exercise equipment and a soccer field.

The most interesting problem was the closed nature of the community. At first it seemed there hardly was a community. Despite the compact living situation, effective means of communication with and between residents are virtually nonexistent. 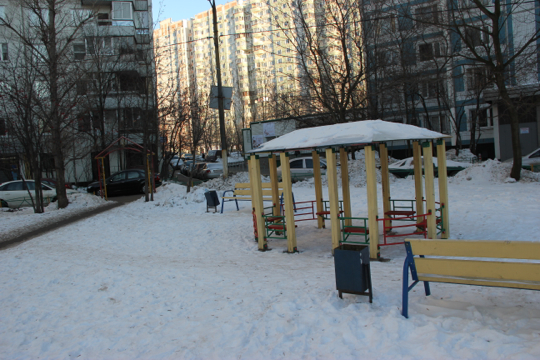 Empty benches for children and adults.

Were there any surprises?

Yes! One resident gave a moving speech — full of references to Baudrillard, Derrida and Guattari — about how the fountain installed in the courtyard by the prefecture is a false improvement. Another created a beautiful flower garden and pond around her building's entrance. 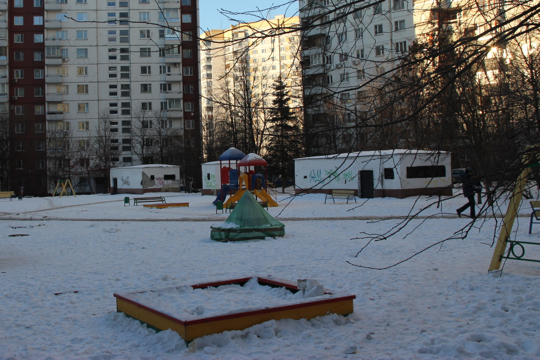 A new fountain wrapped in green plastic, one of many false improvements by the local prefecture.

Besides contributing to the participatory courtyard redesign, what do you hope to accomplish through this research?

I hope it will lead to future projects that include social surveys to help retrofit public space. It's also helping me determine which methods to use for a study of neighborhood communities, which I hope will become a series of excursions through the city. This might be called something like "Exploring Community in Moscow." 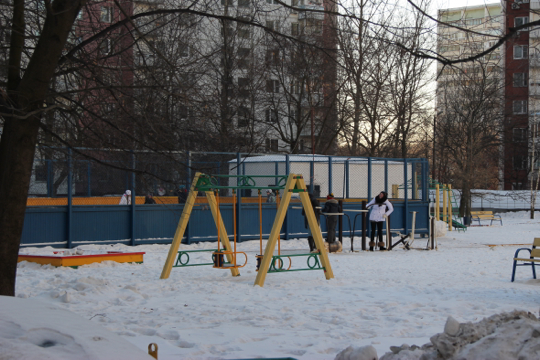 How can research be integrated successfully into top-down and bottom-up approaches to urban development?

Many people with the power to bring improvement seem oblivious to resident concerns, and many residents aren't aware of their rights. Housing communities are often highly atomized, leaving people without much leverage against administrative negligence. Authorities complain that they don't receive feedback while residents complain that their wishes are ignored; there's almost no productive dialogue. 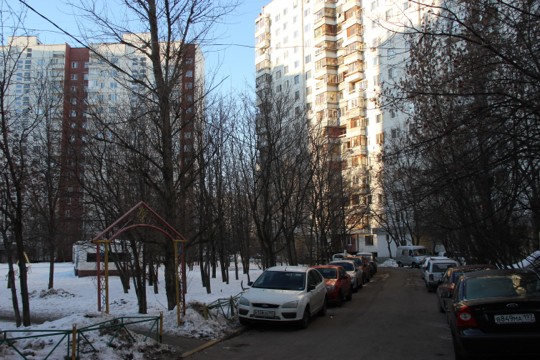 Cars parked along both sides of the street that circles the courtyard.

Neighborhood activists interacting with the government seem like, if not guerrillas, then at least very dangerous elements. And even when guided by good intentions, planners tend to make bad decisions when they don't understand the people whose lives they affect. We hope our research will help change this situation for the better. 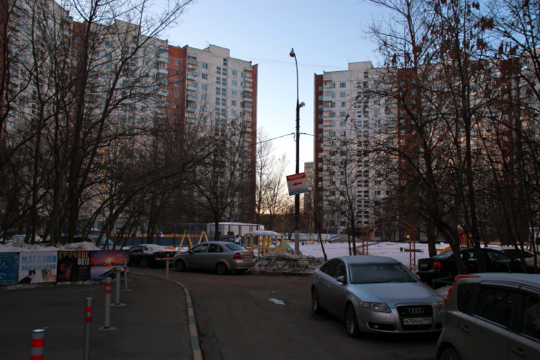 Advertisements greet people at another entrance.

We invite residents to exercise their rights to the city, and we offer city officials the feedback they need to make socially responsible decisions. Local government budgets include funding for sociological research; if this research is directed toward visible neighborhood improvements, it's possible that the relationship between residents and authorities will shift in a positive direction. 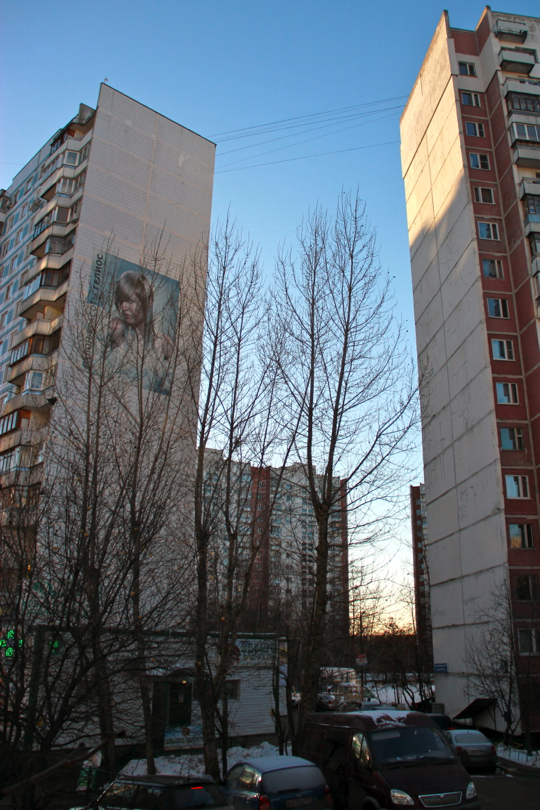 More advertisements and cars outside the complex.

How would you describe the significance of your project for urban development in other parts of the world?

It's hard to say, as I don't thoroughly understand the specific forms of urban development in other countries. But in comparison with work being done outside Russia, our idea for involving residents in planning is just a start. 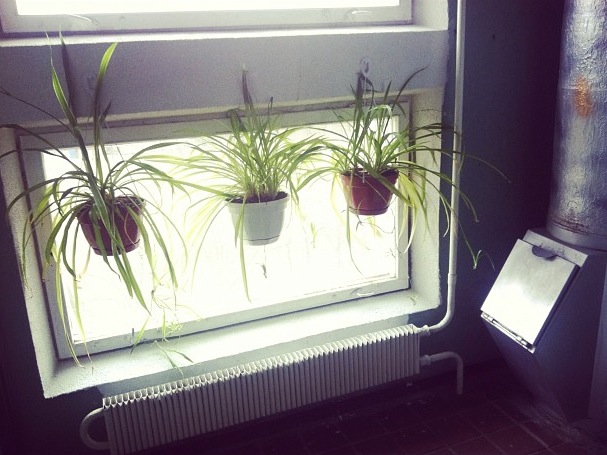 Plants in one of the building stairwells. Source: Petr Ivanov

What are your future plans?

I'd like to expand opportunities for residents to have a say in planning the public space around their homes. In the near future we'll be carrying out similar projects in other buildings around the city. In addition to "Exploring Community," my longterm plan is to do a total social survey of Troparyovo-Nikulino that builds upon the data we've collected so far. I hope this will help strengthen the community and make our neighborhood a better place to live.

Credits: Photos by Peter Sigrist unless otherwise noted in the captions.